Former World Rally Championship outfit Prodrive has made its first venture into rally raid this year in the Dakar Rally, running the team and developing the Hunter vehicle for the Bahrain Raid Xtreme entry.

It has Sébastien Loeb and Nani Roma in its two cars, two of the best drivers a debuting team could ask for, but experience only counts for so much in the desert. DirtFish spoke to Prodrive’s technical director David Lapworth on the Dakar’s rest day to find out how the team is finding the event so far.

Navigational issues and punctures seem to have been the talk of the first week. What are your thoughts?

We don’t really want to make too many comments about the navigational side of things, obviously this is our first Dakar.

We didn’t realise just how difficult the navigation was going to be, I don’t think anybody did. It’s been difficult to the point of being random. Whether you got lost or not wasn’t simply about how good you were [at navigating] it was also about a lucky guess. Carlos [Sainz] described one place where there was about three degrees difference between two tracks and it was almost impossible – well, impossible to tell – from the road book which is the one you’re supposed to follow. You only find out when you’ve followed the wrong one for six kilometers and then discover you’ve missed the waypoint. You needed to be 300 or 400 meters to the right, which over six kilometers of desert is, like I say, three degrees.

Is that detracting from the event?

The feeling is that this is a bit too random. We’ve put all this effort into the car, we’ve found the best driver combination we could possibly get and in the end it’s more about whether they get lost or not.

But you can also look at it and say Nasser [Al-Attiyah] and Stephane Peterhansel are still pushing away at the top; they’ve lost time but they managed to keep their time loss down. If you talk to Carlos and talk to [our] drivers they would probably say it’s gone too far.

What about the high number of punctures we’re seeing?

It feels to me like we could do with a more robust tire. We could pay a little bit in terms of performance for some additional durability, but the old hands here [on Dakar] say we need to be careful before we bring a Safari Rally-type tire. We need to understand the possible performance in the sand, it might be that a more robust tire just gets stuck.

Like the navigation, the number of punctures feels just a bit too far.

Nani found himself running alongside Carlos a couple of days ago. For 30km they were just about side-by-side which gave Carlos a chance to have a look at our car and Nani to look at theirs. Nani said he could keep up with him, he was pushing to do that, but Carlos was having to push as well. 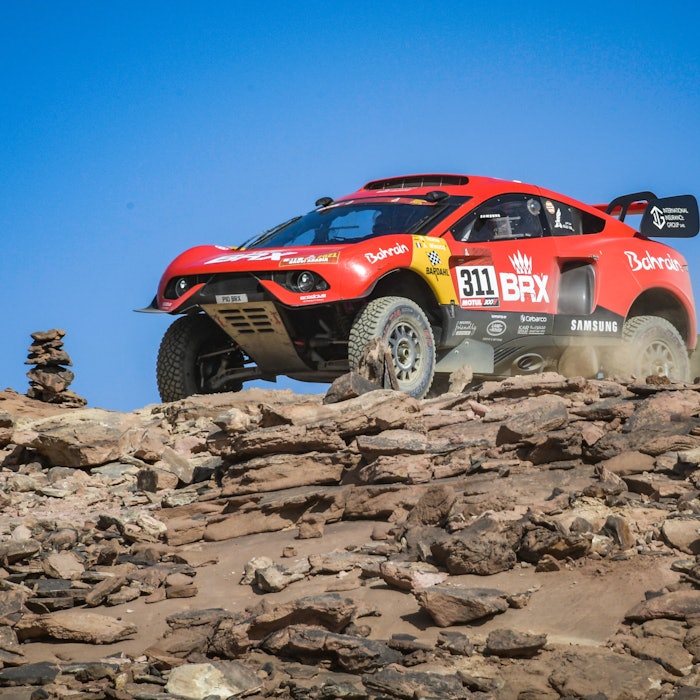 But then they got to a flat, rocky section and Carlos went in a straight line up to the 180kph speed limit while Nani was having to slalom around to avoid the rocks. For the four-wheel-drive cars, the punctures are just a little bit too much.

If there was a direct correlation between the drivers pushing and taking risks and [the number of] punctures you could understand and say the drivers need to manage the situation better. But the drivers are telling us they don’t know where they’re losing the tires – they’re not taking those risks.

Can you explain the difference between the tires on your four-wheel drive car and the buggies like the Mini?

They [the buggies] have three main advantages in terms of tires and suspension. The first is their tire is much bigger. Obviously, at high speed it’s not about suspension when you hit rocks – it’s about the tire needing to be big enough to swallow the rock without feeding massive loads into the suspension. The unsprung mass can’t react to a rock fast enough to get the wheel out the way, the tire has to absorb it. Their tire is a much bigger diameter so it can swallow much bigger rocks.

What can you tell us about Loeb’s suspension problem on Friday?

The components are, as we thought from the test, strong enough, but we’ve had impact with the scenery that we didn’t see in the test. The suspension on Séb’s car wasn’t broken because of a jump landing directly.

It looks like a wishbone has hit a rock or a raised part in the centre of the road. We had seen a bent wishbone on the car earlier. It was bent in a similar way, but when we looked at it, it was bent in the wrong direction. Does that make sense?

If you look at suspension loads, it should bend downwards and it was bent upwards – which could only mean an impact with the road and now we’re looking we can see marks where there was some impact with the road. In two months of testing we hadn’t seen this and we need to think about increasing the protection.

Can you do that for the second week or is that improved protection coming for next year?

Obviously we can’t redesign the whole thing out here, so we will have a rethink when we get back [to Prodrive]. But we will make some more protection for next week – but it’s clearly not hopeless, because we’ve broken one [wishbone] across two cars and don’t forget it’s the same component on each corner – so it’s effective one in eight that has broken. 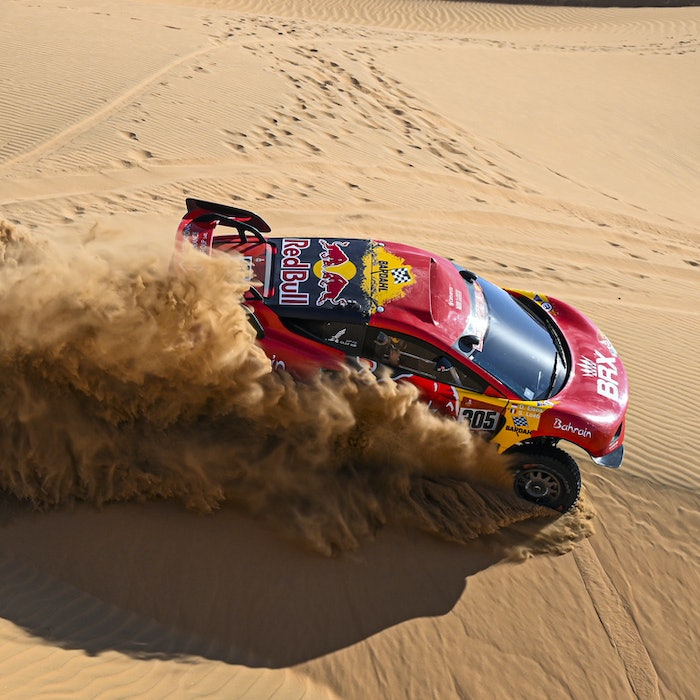 VIDEO: WHY PRODRIVE IS TAKING ON DAKAR WITH LOEB

You live and learn, that’s what everybody says about Dakar and that’s what we’re seeing; if you go down a road and hit a rock in a test, you don’t turn around and go back over the same rock. These things are coming at you blind over crests, it happens. We used to see this in our WRC tests: you’d do a full Greece test, not break anything and then a few stages into the event, the wheel would fall off because you hit things on a rally that you wouldn’t hit on a test.

Has it been harder than expected?

Technically, I’d say not. If I ranked our performance, I’d give us an eight. In terms of navigation it’s been tougher.

What about the second half?

When you can lose half an hour with one navigation mistake we shouldn’t give up and, of course, we won’t. Things can still happen and, while I think it’s highly unlikely that we can get directly involved with Nasser [Al-Attiyah] and Stephane for the lead fight… but if you said to me would you be shocked if one of them had problems? Of course you wouldn’t be, they are pushing hard and everybody else, except them, has lost at least half an hour. I don’t see any reason to think the second half of the event is going to be any less random than the first half. And if that’s the case then who knows where we’re going to be – for that reason we’ll just keep our heads down and keep going.

One thing I have to say is that this event has given me a massive respect for the drivers. I did a 700 and 800-kilometer road section in consecutive days, but we’re in a nice quiet car, chatting between ourselves, listening to some music – I cannot imagine what it’s like to do 500 kilometers across the desert in a race car. Séb got in at three in the morning [on Saturday], went to bed and will do it all again tomorrow. It’s incredible. 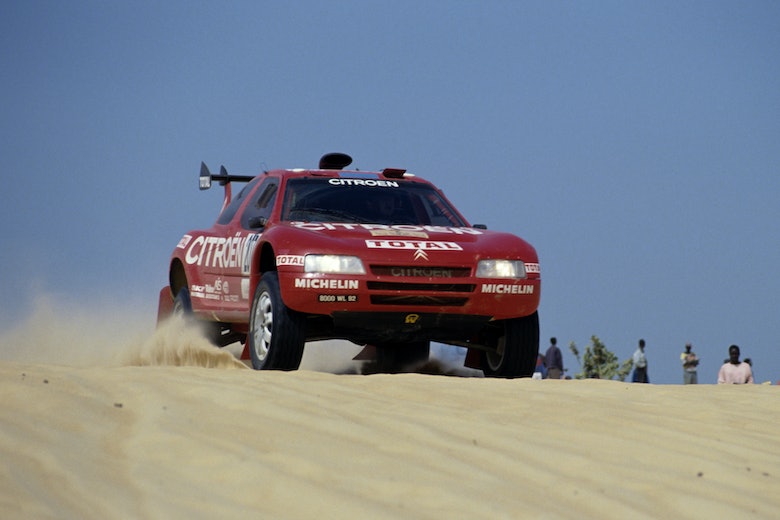 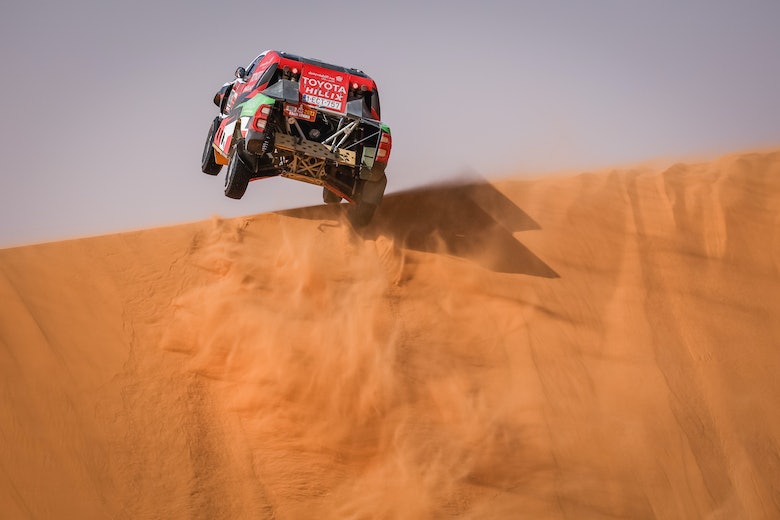 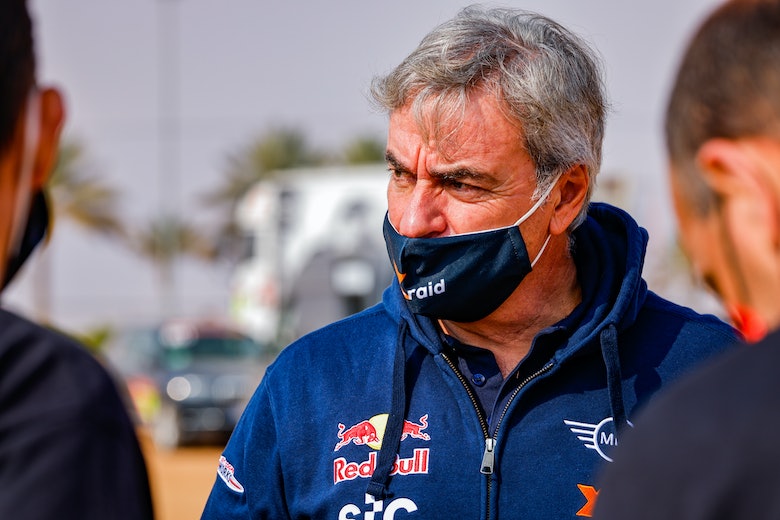