Five Alpine A110 Rally RGTs appeared on the Monte Carlo Rally, and there was certainly anticipation about whether this new car from the 1973 World Rally Champion manufacturer could revitalize a little-noticed category. Formula 1 driver Esteban Ocon even drove a road-going version on two stages.

But we’re not going to see Alpines on Arctic Rally Finland, nor in Croatia, or the five gravel rallies that follow on the World Rally Championship calendar. In fact, the FIA R-GT Cup’s next destination is Rally Ain-Jura, part of the French second division rally championship.

The Cup does reunite with the WRC for the Ypres Rally and Rally Spain, and interlopes on European Rally Championship round Rally di Roma before then in July, but it’s not entirely clear what the FIA is trying to do with this primarily asphalt category.

Vehicles are homologated using a ‘technical passport’ similar to historic rallying, and it takes a considerable amount of time for the FIA to approve the gravel-specification versions of the asphalt-friendly sportscars.

Bureaucracy does nothing to boost interest, even if the relative freedom of a car-specific passport reduces the traditional gatekeeping requirement of production runs that deters small-scale manufacturers.

The R-GT Cup has run since 2015, although 2016 counted just one crew entering a single rally, and entries peaked when two Abarth 124s, two Porsche 997 GT3s and an Alpine turned up for the 2020 Rally Monza season finale.

Only an Alpine presence remained for the 2021 season opener, with its newly homologated model, while the Abarth (pictured below in 2019) is off to do its own thing in the ERC’s Abarth Rally Cup. Tuthill is developing retro Porsches over its aging R-GT car, and Lotus’s Exige R-GT got two stages into its debut rally in 2012 before retiring and never being seen again.

But maybe committing to a new rally category in its formative years was these entrants’ downfall as Alpine is confident – and as enthusiastic – about entering the market today.

“Since the reveal of the brand three years ago, everybody wanted to see the car again in rallying,” Alpine’s commercial director Benoît Nogier, formerly team manager of the Citroën Junior Team in the WRC, tells DirtFish.

“The regulation of R-GT was the right opportunity to do it. So in cooperation with Signatech two years ago now, we worked together. Signatech mostly design and develop the car, and we homologated the car last year. It was basically the plan.

“After what we saw in Monte Carlo, it’s evident the Alpine brand must look forward. It was so good and so nice to see the blue colors again on the mountains, in the middle of the snow, it was a nice picture.”

It wasn’t just Nogier who saw the value in having Alpine back on the Monte Carlo stages – the A110’s predecessor won the rally, the first ever WRC round, in 1973 – as FIA rally director Yves Matton was delighted too. Does he now see R-GT as a success?

“I want to say yes and no,” Matton says. “We worked hard to have brought Alpine back in R-GT, considering that it makes sense to have these kind of cars in the championship. And that brings value for the championship, but also for the fans and the spectators, and if you go in the past history of rallying R-GT is part of the rallying world.

“I want to say that I am disappointed that we don’t have more interest or more involvement from manufacturers for the category, but then I’m really happy to see Alpine have six cars in Monte, that they continue to believe in this category, and I hope that we will be able to convince some of the manufacturers to join because it can be a great platform, a great marketing tool.”

That sixth Alpine was the non-competition entry driven by Ocon, whose presence was, as Matton puts it, a “marketing tool”. Nogier is crossing his fingers that Ocon has a second go, and still plans to get his F1 team-mate Fernando Alonso in the car too.

Alpine is heading to the top tier of open-wheel and closed-wheel circuit racing this year in addition to its customer R-GT program, as part of a marketing push that is practically going in the opposite direction to many other automotive firms under the same pressures right now, as a result of the COVID-19 pandemic slashing sales.

“There are discussions about the future of the customer racing activities for Alpine at the moment, and for sure we will investigate and try to build something in rallying with the R-GT people,” Nogier continues.

“Because I think it’s probably the best opportunity for the car, to reach a kind of certain level in terms of performance.

“In the 1970s it was a big fight between Alpine and other very famous German brands.

“I hope as soon as possible these German brands will come and fight, and we see again a very competitive category in R-GT. We’d like to have this fight, and we’d like to carry on to improve the interest of the R-GT category. Because we really think they are quite spectacular cars, quite powerful, these really are the cars the people want to see on the roads.”

That performance was seen on asphalt and ice in Monte. Will the A110 make its mark on gravel in the future?

“I would like that but we have to remember that in the customer racing, the goal at the same time it is to sell cars,” adds Nogier. “And honestly I cannot see a big market on the gravel for those R-GT cars. So we don’t have the will to do it; we can never say never, but I cannot really imagine developing any car on the gravel.”

But moving to loose-surface rallies may be what unlocks R-GT’s potential as a category, and that’s a fact not lost on Alpine or the FIA.

If R-GT does have a roadmap with the FIA like other elements of the rally pyramid, especially if it is to fit in as a step on the career ladder to the WRC, will gravel competition be included in it?

“I would say that the first priority is to try to have another manufacturer join the category,” says Matton. “Personally, I believe you could be on both surfaces with the car, but it seems it’s not the priority with these manufacturers. They are more focused on Tarmac with this kind of car.”

FIA categories aren’t everything in rallying, and sports cars often take to the stages under other rulesets with enthusiasts and budding career rally drivers behind the wheel, especially in American Rally Association events. The Subaru BRZ sports car, which races across the world but is not a R-GT, is popular with DirtFish-trained rally crews in fact. 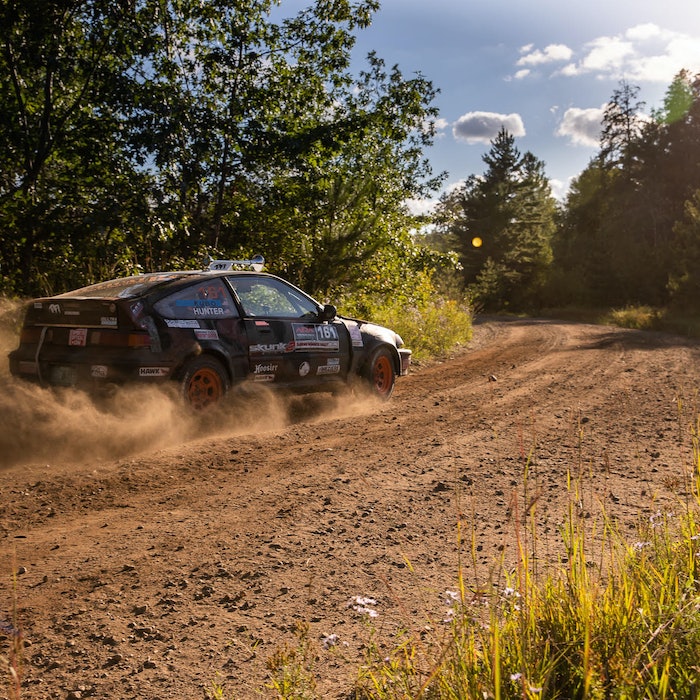 The unique cars on show at the Ojibwe Forests Rally

Intrigued by the array of cars in ARA competition? We looked at some of the more eclectic entries on last September's National round

So it’s a market-led decision that will influence what the FIA and manufacturers do next with R-GT, and Alpine says it’s about making sure the market grows beyond its own sales. That starts with overhauling the existing R-GT Cup.

“We will carry on lobbying the FIA to get an even better competition for R-GT,” Nogier states. “We have this FIA Cup at the moment, really I think the category would deserve a better place in the ladder of the FIA, and I hope we will have space on WRC events in the world championship or in ERC, because in those two championships I think we should have a better consideration.

“I’m not saying nothing exists, this FIA Cup is interesting, we will be part of it with customers, but I think the R-GT categories would deserve even a bit better from the FIA so I will carry on lobbying to get something even bigger for the category.”

That includes, and arguably depends on, bringing Nogier’s industry rivals into the equation and convincing them of what R-GT could become.

“I will try to get the support from everybody,” he adds. “I hope other brands will come to the category. So I hope in a way if we work together with the FIA, with other brands, with partners etc, we will develop the attractivity of the category. On that matter we have to work all together, and you have all the technical and sporting commissions at the FIA to discuss the subject.

Most importantly is whatever the way to do it, it’s to improve the visibility, accessibility, and connectivity between the rally and the public Benoît Nogier

“R-GT, WRC, any categories will have to adapt to this new electric world. It’s already clear that the next projects Alpine does will be all-electric.

“I think we’ll have to think about it and do a development of electric cars for the next generation of R-GT.”

As already touched upon, the real reason Alpine is back in rallying is pure and simple: nostalgia. Introducing new audiences to old successes – the A110 shares visuals as well as a name with its 1970s forebearer – is an easier sell to customers than establishing something entirely new. In fact, all of Alpine’s 2021 motorsport plans are a case of revisiting the revived brand’s glory days.

“Rally is in the DNA of the brand, and whatever the future will be, at the moment you have to remember where you are from,” is how Nogier puts it.

And in the end, manufacturer involvement is all about brand visibility, which is at the core of one of motorsport’s modern conflicts in approach.

“Most importantly is whatever the way to do it, it’s to improve the visibility, accessibility, and connectivity between the rally and the public,” Nogier concludes.

“So if the promoters think the best way to do it is to include superspecial stages in towns, to be as close as we can to the town center, I’m not against.

“But it must match with what the rally and the nature of the rally is; the rally can be a show but, rallying is not rallycross. Rallying, there is a past of the sport which is to adapt yourself, to fight yourself with the nature, with the road, so we have to respect that as well.

“I think we always try to get the right balance between that attractivity and what the sport really is.”

Rallying in 2021 can improve without rehashing what it was in 1973, and building interest depends on following a path to the future rather than back to the past, which is where R-GT can come in with cars that in road-going spec already turn heads (with or without an internal combustion engine) more often than the standard Ford, Hyundai or Toyota.

It’s too early to judge Alpine’s big motorsport return, although it’s been great to see the rally car be the first out of the blocks before its F1 and Le Mans prototype siblings. But can a nostalgia project ever really turn into a long-term commitment, and if it doesn’t what does that then mean for the future of R-GT?