Ever since the introduction of Barry McKenna’s specially built M-Sport WRC car in the American Rally Association National series, there’s been a myriad of questions raised about not just the car, but how well the competition stacks up against it.

It’s no secret that the Vermont SportsCar Subarus have dominated the US rally world for about a decade, but ever since last year when McKenna took the National championship primarily behind the wheel of a Škoda Fabia R5+ car, the question of how ARA classification levels compare to WRC has been on many people’s minds. The introduction of the WRC Fiesta has only heightened curiosity.

So why is it that World Rally Championship results are usually predictably close between World Rally Cars with around a three second per mile gap over Rally2 machines, while in the ARA we often see more mingling between the top O4WD and RC2 cars?

While it’s hard to say for sure why all these cars are able to be so competitive with each other in America, there’s many factors we can look at to get an idea of what’s going on.

First and foremost, one of the main reasons we saw McKenna being so successful in his R5 cars prior to his switch to the new WRC car is because he often runs them in R5+ specfication.

When the headline was McKenna beating the Subarus in his R5 Fabia, he wasn’t racing in the RC2 class with your average R5 car. Instead he had fitted the Škoda with a 34mm restrictor instead of the usual 32mm required by FIA regulations, as well as a few other small tweaks, typically aerodynamic related.

This was also the same set-up used when Ken Block raced the car to second place earlier this year at the 100 Acre Wood Rally.

This pushes the car out of the RC2 class and into Open, and allows it to be far more competitive against the VSC built Subarus, and even allows it to be a better choice on many stages due to how it can out-handle the larger cars on more technical roads.

What does Open class entail?

The ARA’s Open classifications, specifically O4WD, are set up differently from the FIA’s classifications. In the words of ARA competition director, Preston Osborn, describes it as “truly an open class.”

“There’s very few restrictions on what you can do to modify the cars, and a lot of it is driven by the teams that were involved in the past,” he says.

“Even if you look back when John Buffum had the Hyundai team running the Tiburon. That was back in the Open class.”

The wildly successful Tiburon is a great example of the open class. Utilizing an all-wheel-drive system that was never offered in the road car, and a special built turbo four-cylinder based on the Sonata’s engine block, Paul Choiniere was able to win multiple US rally championships behind the wheel of the O4WD Tiburon, probably thanks to the fact it shared very little mechanically with the road-going Tiburon.

This is all to say O4WD really requires no resemblance to whatever original production model the car is based on, and is instead limited more by power, weight, and cost.

A modern equivalent would be Pat Moro’s LS3-powered AWD Chevy Sonic, or, on the O2WD side of things, Seamus Burke’s V6 Mk2 Escort.

While O4WD gives us the crazier builds, it’s also the class many spec-built cars fall into when they race in the US.

R5+, WRC, AP4, R4, Proto cars, and likely anything considered above Group N that isn’t FIA-spec RC2, most closely fall under the regulations of the ARA’s open class – though changes in restrictor size and vehicle weight, as well as the conversion to a mechanically actuated transmission, might need to be put in place before getting actual approval for competition.

“I think with the way rally is here in the US, because we have so many different makes and models involved, writing rules to really try and fit different manufacturers is difficult,” Osborn says. 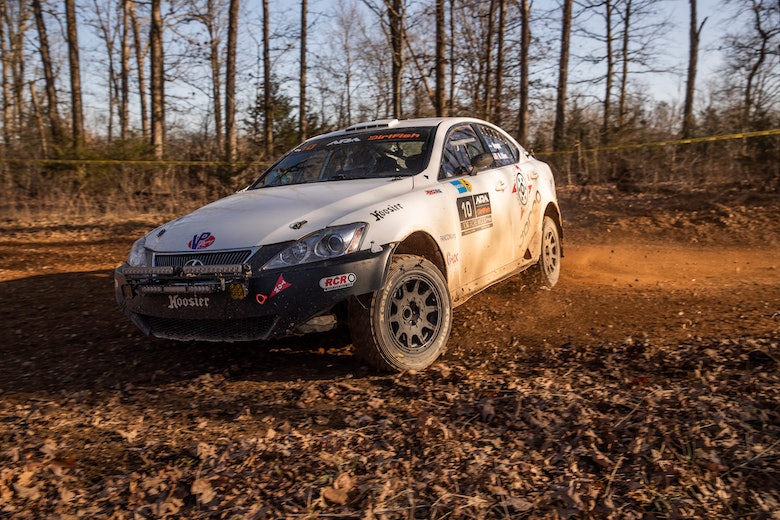 Learn about one of ARA's unique cars

“So over the years the rules have become, or I should say have stayed, much more open than the FIA classes that have been developed.”

Regulations are also always evolving as necessary. The most obvious examples includes the recent aerodynamics debate that sprouted out of the grey areas pointed out by McKenna’s WRC car, and the anti-lag rule grey areas that were revealed at Ojibwe last year.

McKenna’s WRC car is a one-off

We can’t necessarily look at McKenna’s performance in the WRC car and compare it to the performance of, say, Gus Greensmith driving an M-Sport Fiesta in the WRC because the cars are different, and we don’t have a sure comparison of which would be faster and by how much.

Thanks to the O4WD regulations in the US, McKenna is able to run a larger 2-liter turbo based roughly on the old Focus WRC block. But he’s required to run a 34mm restrictor on the turbo, as opposed to the 36mm restrictor used in the WRC.

McKenna’s car is also unable to use the electronic differentials and paddle shift transmissions of the WRC to fit into the more limited side of the ARA’s regulations.

We can speculate, but overall it just becomes difficult to tell how much faster McKenna “should” be than a top RC2 class car.

Osborn thinks it might just even itself out between the two series.

“Your WRC and your Rally2 cars are upwards of 2-3 seconds per mile difference.” he says.

“I think if you took, say, at Barry’s car and ran it [with] equal drivers compared to a Rally2 car we would probably see similar results.”

Perhaps with more time and events we’ll be able to get a more consistent picture of how the car competes performance-wise with traditional WRC and R5 cars.

Subaru has been largely uncontested for years

There’s little doubt in my mind that Travis Pastrana, David Higgins and Oliver Solberg were always giving it their all when they hit the stages, but ever since Block’s last full ARA championship attempt in 2013, the Subarus have been almost guaranteed victories, just based on hardware alone.

Being the only high-dollar factory-backed team, all Subaru had to do was put together a car capable of outrunning the competition that they had. And while it was a fast, well put-together car, there was no reason for aiming for any FIA standards, or any other standards for that matter, so long as it held together well, and competed at the top of the US rally game.

The closest Subaru came to a true benchmark would be when McKenna brought his S2000 Fiesta to the US, but even then the car was outdated compared to WRC standards, and Subaru was typically able to pull a few minutes ahead by the end of most rallies.

In fact, the first time we’ve seen a car able to completely run away from Subaru was at 100 Acre Wood when McKenna debuted the WRC Fiesta.

If it hadn’t been for a costly puncture, McKenna could have ended with a decent winning margi for his first event in the car, and he proved he could take plenty of time out of Block, Brandon Semenuk and Pastrana every stage after suffering the time loss.

You can already see the effects of the new competition on Subaru’s approach as they showed up to Southern Ohio Forest Rally with a new aero package in hopes to hold their own. Despite this, McKenna was still able to take a two-minute win; but in a rally plagued with offs, delays, punctures, and countless other issues, it’s not a very straight comparison either.

I want to start off by saying very clearly that the drivers in US rallying are quite skilled, and are absolutely at the top of their game.

The WRC, however, is a step above what we have in the States no matter how you look at it. More money, more practice, more training, and more dedication goes into the top teams in WRC than in the ARA, and because of that, the WRC has the greatest rally drivers in the world. 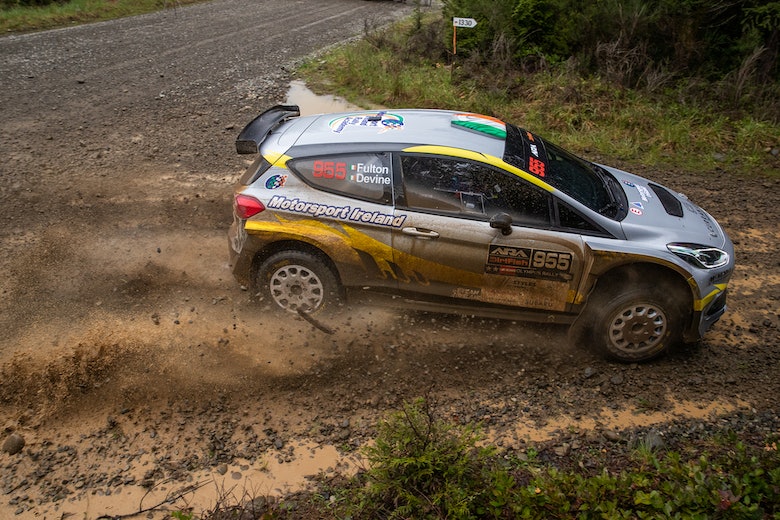 The growing Irish influence on ARA

At Olympus Rally earlier this year, we saw Josh McErlean, Junior British Rally Champion of 2019 and now a Hyundai junior compete in Enda McCormack’s Hyundai i20 R5 in a one-off sort of event.

While McKenna’s WRC car was absent, the Subarus were only able to pull about 1.5s per mile on McErlean, which arguably should have been higher considering how many stages are dependent on high top speed at Olympus – one of the R5 cars weaknesses.

McErlean was even able to win the most technical stage of the rally by a few seconds over Pastrana in the FIA-spec i20 R5. Clearly an advantage of the smaller, more nimble car yes, but still somewhat of a shock.

Given that the US has been slow to pick up on the R5 platform compared to Europe, and didn’t have anyone investing in their own alternatives such as the AP4 class in Asia-Pacific rallies, it’s not surprising that those competing in the RC2 class in the US have more to learn than the teams that have been pouring money and research into the platform for years.

The same idea carries over to the WRC cars. McKenna has only run two events in the WRC Fiesta, and other than that, there has been no US rallying experience in them. While McKenna is already performing well in the car, it will still take time for that level of competition to become normal in the US.

McKenna also stated after 100 Acre Wood this year that while he learned some of the limits of how fast he can drive the car, he doesn’t necessarily want to always be 100% on the edge, and tries to play conservative when possible.

“Now that I see what the car’s fit to do, I don’t want to drive it like that all the time if I don’t have to, but we will!” he said.

So why then is it that R5s, WRC cars and the ever-dominant Subarus are all able to compete so well with each other in the US?

The reality is there’s no simple answer, but the closest thing I can say is that rallying in the US has been behind the curve for a while, and is just now starting to catch up.

We’re currently in what feels like a very transitional time for rallying in the US, where the interest in racing is high, and the competition is growing faster and stronger. Because of this, changes are happening to regulations, the driver skill levels, the interest from drivers overseas, and many other things.

We might just have to sit back and wait out a few more events before we can really say for sure how the competition stacks up across classes, but in the mean time, we can enjoy a liminal period in which the outcome of any given race can be uncertain, and a true underdog story is still possible.