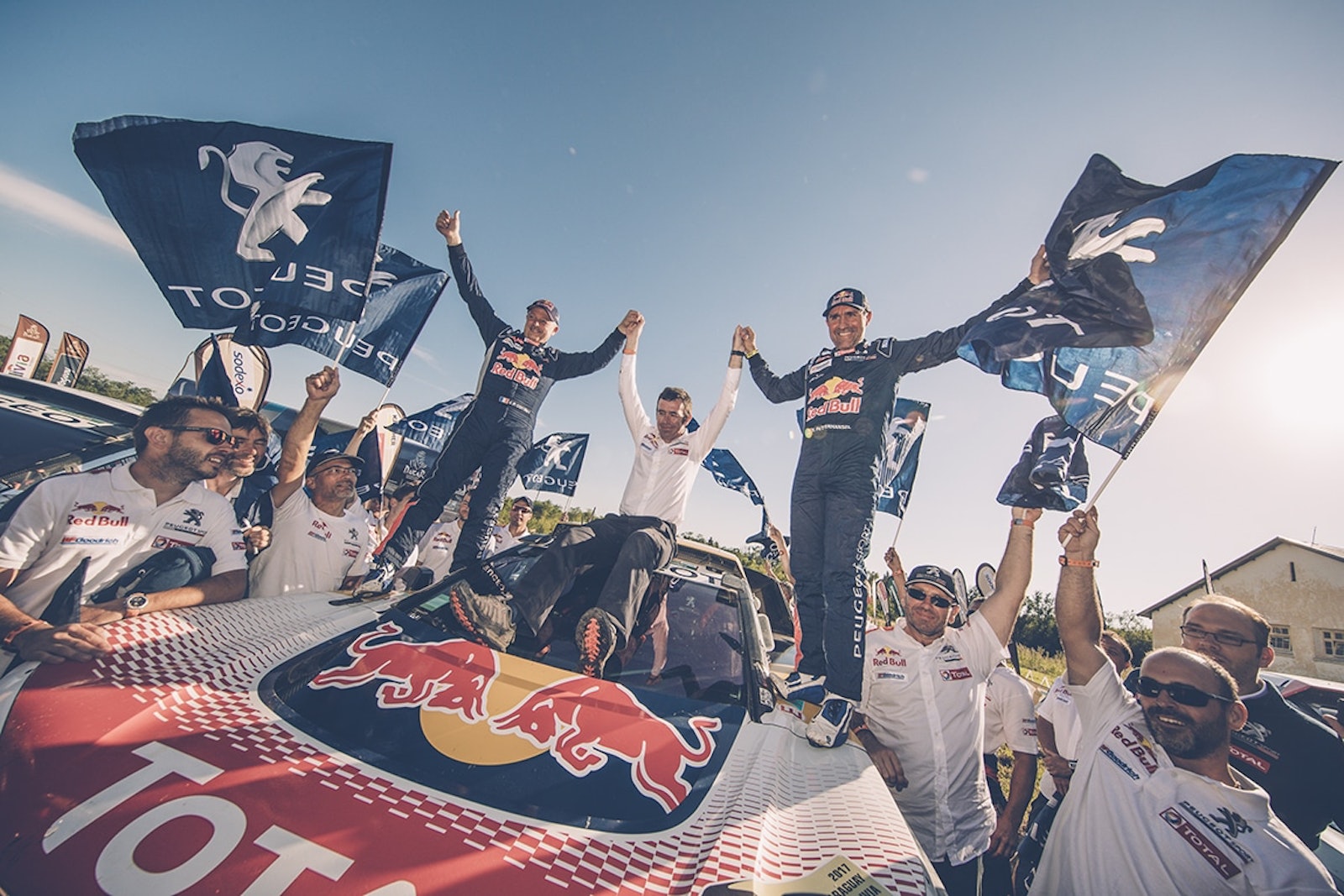 Stéphane Peterhansel edged Sebastien Loeb overall (+5’13) to take his Dakar victory No 13 with their Team Peugeot Total teammate Cyril Despres in third (+33’28). Three Frenchmen and three Peugeot 3008 DKRs occupy the podium*, with only Carlos Sainz missing after he crashed and was forced to retire during the first week of racing.

“We were fighting with six or seven drivers at the beginning of the race and after a while, they were only four,” said Peterhansel at the finish line. “And during the last week, we were only two – just Seb and I. We fought really strongly and I am the winner in the end – but it’s a small detail. This is the victory of experience.”

Sam Sunderland made history by finishing the last special in sixth place to take the overall win. The first Briton to win the Dakar, he claims the rally ahead of KTM teammate Matthias Walkner (+32’00”) and Gerard Farrés (+35’40).

Both Sunderland and Walkner had never finished the infamous rally before. The duo made up for Toby Price‘s abandon, their teammate and defending champion who retired after crashing and breaking his leg on Stage 4.

“It’s overwhelming,” admitted Sunderland. “When I crossed the line, the emotion really took over.

“It’s taken some time to change [from his motocross background], I’ve learned the hard way like everybody. I kept fighting and never gave up and I’m really grateful for all the people I have around me that have guided me. Everybody in the team has worked so hard, they all deserve this victory.”

Chilean rider Ignacio Casale claimed the closing stage, beating local boy Santiago Hansen by 52 seconds. This enables him to take second place in the final general classification (+1h14’51) behind Sergey Karyakin, the dominant winner of the race, with Pablo Copetti in third (+4h20’19).

Eduard Nikolaev was already assured of winning his second Dakar but the Kamaz driver confirmed his domination with another victory on Saturday. His teammate and fellow Russian Dmitry Sotnikov  (+18’58) gives Kamaz the runner-up position in the general. Gerard de Rooy takes the third overall spot (+41’19).

* All results are subject to change until final technical verifications and podium in Buenos Aires.

Stéphane Peterhansel #300: “We were fighting with six or seven drivers at the beginning of the race and after a while, they were only four. And during the last week, we were only two – just Seb and I. We fought really strongly and I am the winner in the end – but it’s a small detail. I probably won the Dakar on Friday when Seb got a puncture. This is the victory of experience. Sometimes, I knew I wasn’t in a phase to follow Seb so I opened the way for him. The spirit inside the team was very good. There was no team order – it was just a fight between drivers who have the same car. A 14th victory? Why not!”

Sébastien Loeb #309: “Ninth place last year, second this time, it’s a great improvement. Plus we stayed on the piste this time [laughs]. We did a couple of navigation mistakes but considering how complex this Dakar was, we did well overall. We had a mechanical issue at the start and it delayed us. We tried to make up for it afterwards. We finish second overall with a small time gap… it is what it is. We were really fast on the piste; it was a bit trickier off-piste but we saw we have the potential. We need to do better next time! I don’t think I can do as much rally-raid as Peterhansel though, But yes, the objective is to win the Dakar one day. As for now, we’re going to enjoy this moment and this Peugeot podium.” 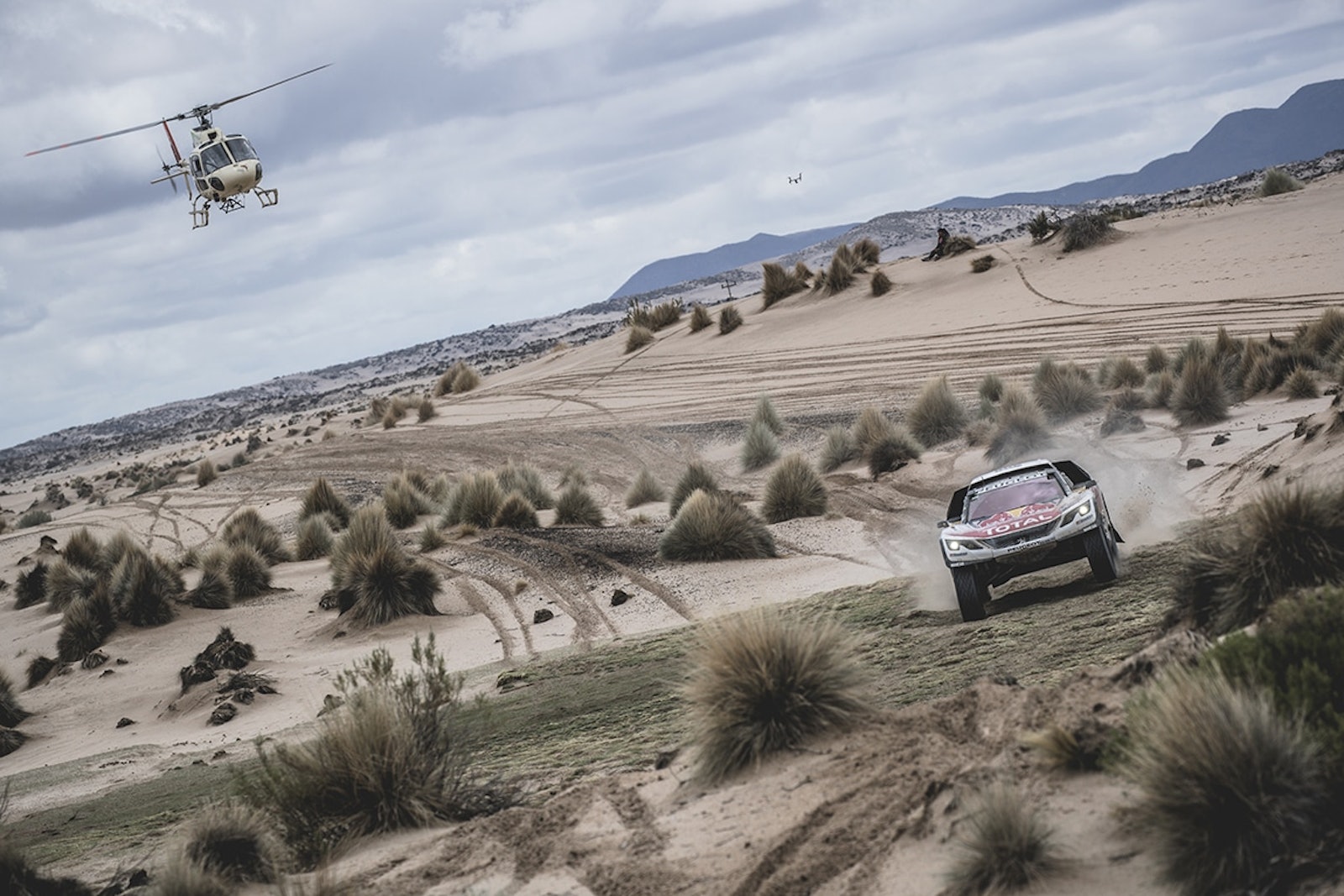 Cyril Despres #307: “A good feeling. I didn’t get on a Dakar podium for three years and when you like this race so much and train all year for that, it’s long. Obviously they are two big competitors in front of me. Peterhansel and Loeb aren’t just a mountain, they are an Everest, an Himalaya in front of me! I will try to climb and train more.”

Giniel De Villiers #302: “Obviously we’re a little bit disappointed but you have to give big congratulations to Peugeot because they deserve their success. We didn’t quite have the pace so maybe we have to switch to two-wheel drive in future to compete with them. All in all it was a very tough Dakar with plenty of navigation which is good. It was a pity that two stages got cancelled.”

Kuba Przygoński #316: “It’s our second Dakar in a car and we finished in seventh place so we are happy with this result. It was a hard Dakar with challenging navigation and terrain and together with my co-driver Tom Colsoul we managed these problems well. Our speed is growing and this is important for what we want to achieve in the future.”

Sam Sunderland #14: “It’s overwhelming. When I crossed the line, the emotion really took over. It’s been difficult to stay calm, especially when making navigation mistakes… but we are here, we did it, and I couldn’t be any happier. Hopefully we can create some English interest now! I came from a motocross background and with the rally, it’s different, it’s a long time to stay focused. It’s taken some time to change, I’ve learned the hard way like everybody. I kept fighting and never gave up and I’m really grateful for all the people I have around me that have guided me. Everybody in the team has worked so hard, they all deserve this victory.”

Matthias Walkner #16: “Arriving on the podium is an amazing feeling. It’s a dream come true after a very, very rough past year – I had a bad injury and it took me almost half a year to get back on the bike. The harder was Stage 10 – I knew it was the last stage that could change things a lot. We arrived at the bivouac at 6pm and I studied the road book until midnight; I knew I had to stay strong for two more days and maybe, it would give me something back. It paid off and it’s so cool. This morning, I was racing, I was in a tunnel and I didn’t think. But now I’ve arrived at the finish and I’m starting to realise… maybe a little bit of crying. I hope this is the beginning.”

Hélder Rodrigues #5: “It’s great to finish in the Top 10, but aim is to be at the very front. This year it was not possible for me to fight at the front of the race because I did not start so good. Every year our Yamaha team is getting more professional and the bike is improving. We will be testing and racing again this year to come back stronger.”

Anastasiya Nifontova #59: “It’s hard to say exactly how I feel. On one hand it’s happiness because I managed to finish this very tough race but on the other hand there’s sadness because this nice adventure has now come to an end. Now we have to wait one year until the next Dakar, so mixed feelings right now.”

CS Santosh #42: “It’s a great feeling to cross this finish line. We’ve been out racing for such a long time. It was tough the first time I did the Dakar but this time was even tougher. To come here and finish again, this time with Hero makes me really happy.”

Walter Nosiglia Jager: #66: “I’m here waiting at the finish to see my father and brother come over the finish line. I’ll have to ask them what took them so long when they finally arrive! But seriously, the support we have all been given by the crowds in Bolivia was so special and made us all even more determined to finish this race.”

Eduard Nikolaev #505: “I am overflowing with emotions and I even teared up a bit when we crossed the line. Last year for us, for our crew, it wasn’t entirely successful, and this year we tried to change the tactics a bit. It was truly not an easy race, not an easy start. Unfortunately we couldn’t be up there leading at the beginning but thanks to our boss Vladimir Chagin and his strategy for the whole route, it’s been proven that Kamaz Master gets the job done.”

Dmitry Sotnikov #513: “I’m happy to have played my part in another Kamaz victory so we can bring the trophy back home once again. Now we’re already looking forward to next year’s rally because we have strong competitors who give us a good fight here. Winning my first Dakar stage is a memory that will always stay with me.”

Ignacio Casale #251: “Wow, I’m so emotional right now. I’ve had so many ups and downs at the Dakar and this is the best I have felt at the finish line. Winning in 2014 was great but after not being able to finish the rally the last two years means that crossing the line now is extra special, even if I have had to settle for second place.”