If you have ever been to the DirtFish headquarters or follow us on social media, then you’ve probably seen the amazing rally cars on display in our lobby. DirtFish is fortunate enough to have an owner who became extremely passionate about rally at a young age and who has acquired a very impressive collection of cars over the years. The RS200 EVO S, Colin McRae’s Focus RS WRC, Richard Burns’ WRC99 and the Escort Mk II you’ve most likely seen sitting in our lobby are just a small portion of that collection. One other extremely cool car from the collection is the 2008 MG S2000 rally car. 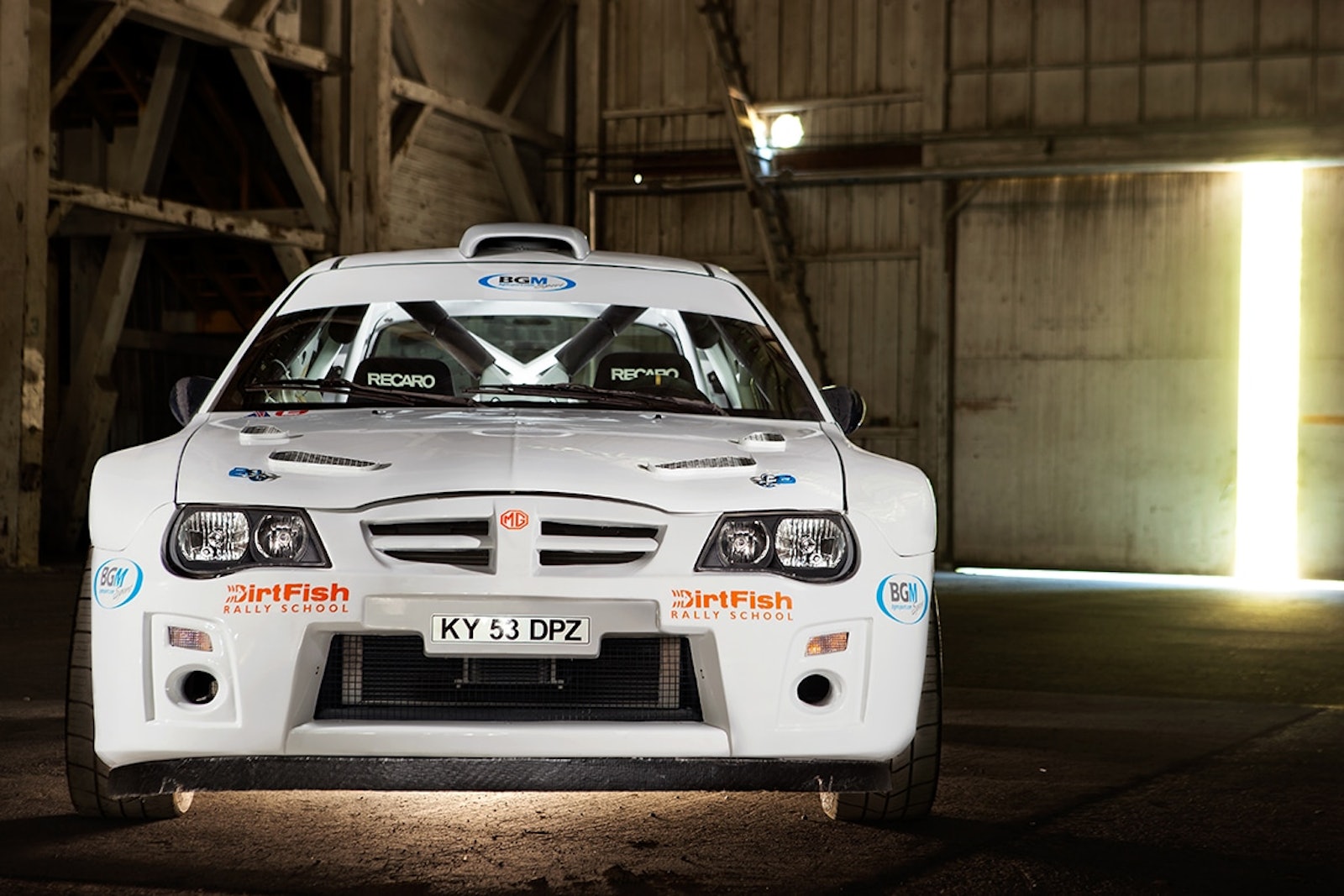 This awesome little car began life as an MG ZR, which was an updated version of the popular Rover 25 supermini-class car. In 2001, MG Rover made the decision to create a hot-hatch version of the Rover 25 with updated front and rear bumpers, headlights, taillights and many other exterior features. Not only was the car given a facelift, but it was also equipped with upgraded suspension and a sportier exhaust giving drivers an aural experience on top of the improved handling. The ZR was hugely popular in the UK and in 2004 it was MG Rover’s best-selling car.

The MG S2000 project was taken on in 2007 by Bill Gwynne Mortorsport and DirtFish owner, Steve Rimmer, with the ultimate goal of building a competitive car that met the new FIA specifications required for the WRC and ERC S2000 class. For those of you who don’t know, the Sport 2000 cars compete as a part of the WRC 2 class, which is a major feeder series and the final stepping stone for any driver whose goal is to compete in the full-blown WRC. While many other types of cars, such as R5, R4 and N4 also compete in WRC 2, there are two types of S2000 cars that fit within the regulations. Either a 1.6 Liter turbocharged engine with a 30mm turbo restrictor or a 2.0 Liter naturally aspirated can power the cars. All of the testing of the newly built cars was carried out by BGM owner, Ian Gwynne, who even raced the car in its first-ever race. 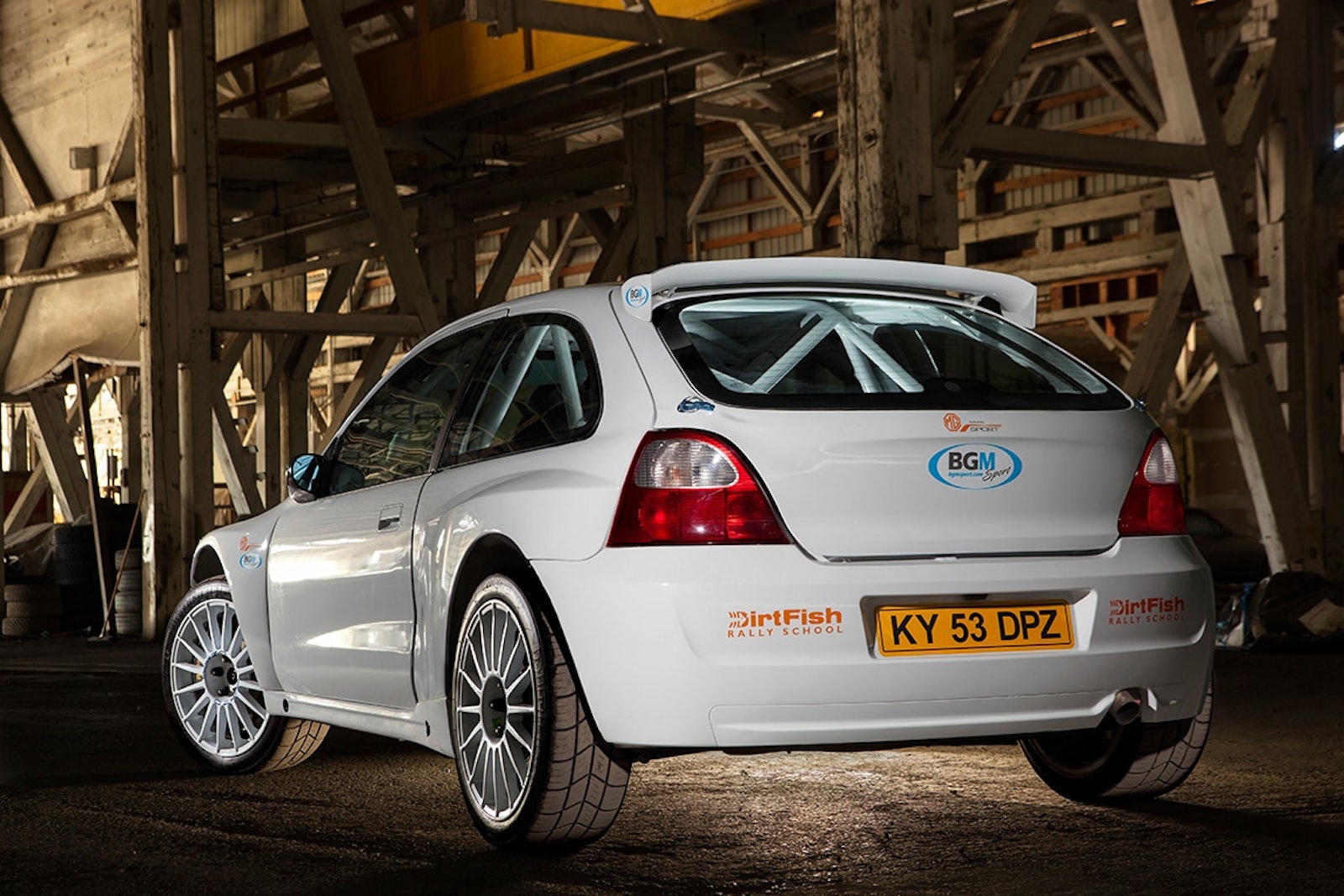 The MG S2000 car we have here is powered by a 2000cc Rover K series straight-4 naturally aspirated engine that produces an impressive 270 bhp at 8500 rpm (more that a stock Subaru WRX STi to put it in perspective). Keeping the engine constantly fueled is an ATL racing fuel system. Mated to the engine is a 6-speed sequential gearbox with flat-shift, limited-slip differentials and drive shafts built by XTRAC (who are one of the leading transmission technology companies in the world); it is also equipped with an AP Racing clutch. Next on the list is the suspension: keeping these cars connected to the road is an Exe-TC suspension setup, which can be easily swapped between gravel and tarmac setups. Bringing the car to a quick stop is a set of AP Racing brake calipers and rotors. The exterior also has a few small upgrades – you probably noticed the wider front and rear fenders; not only do they make the car look even cooler, they were made to accommodate more suspension travel. Other exterior updates include newly designed front and rear bumpers, a modified hood with vents for improved heat dispersion, roof scoop and rear-wing. 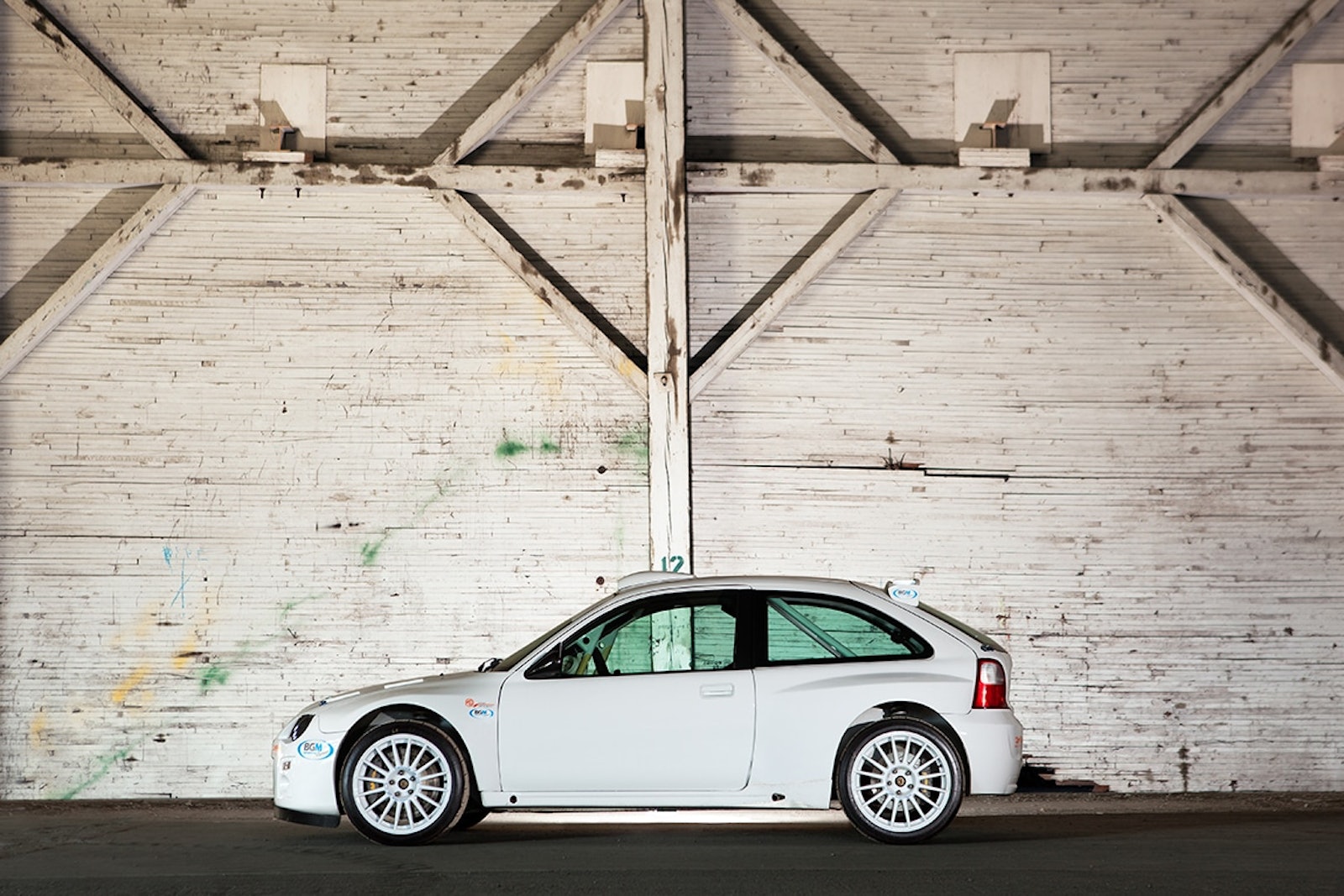 Only five MG S2000 cars were ever built, three of which are still in use today! In 2015 alone, two of the MGs were used in 8 rallies around Great Britain and Ireland with three different drivers behind the wheel. Not only did they win their class in the majority of the rallies, they also achieved many top-five national, overall finishes. Over the years there have been many drivers who have competed in the MG; some of the more notable names to have driven the cars are Mark Higgins, Markko Martin and Ott Tanak. Higgins was even chosen to campaign the car in the British Rally Championship for a season. Martin and Tanak both piloted one of them during the 2010 Goodwood Festival of Speed. Martin was invited by BGM and Steve Rimmer to drive an assortment of cars, including this MG. He accepted the invitation with one stipulation; that he would be able to bring a group of his junior team members along to drive with him, one of which was Ott Tanak. 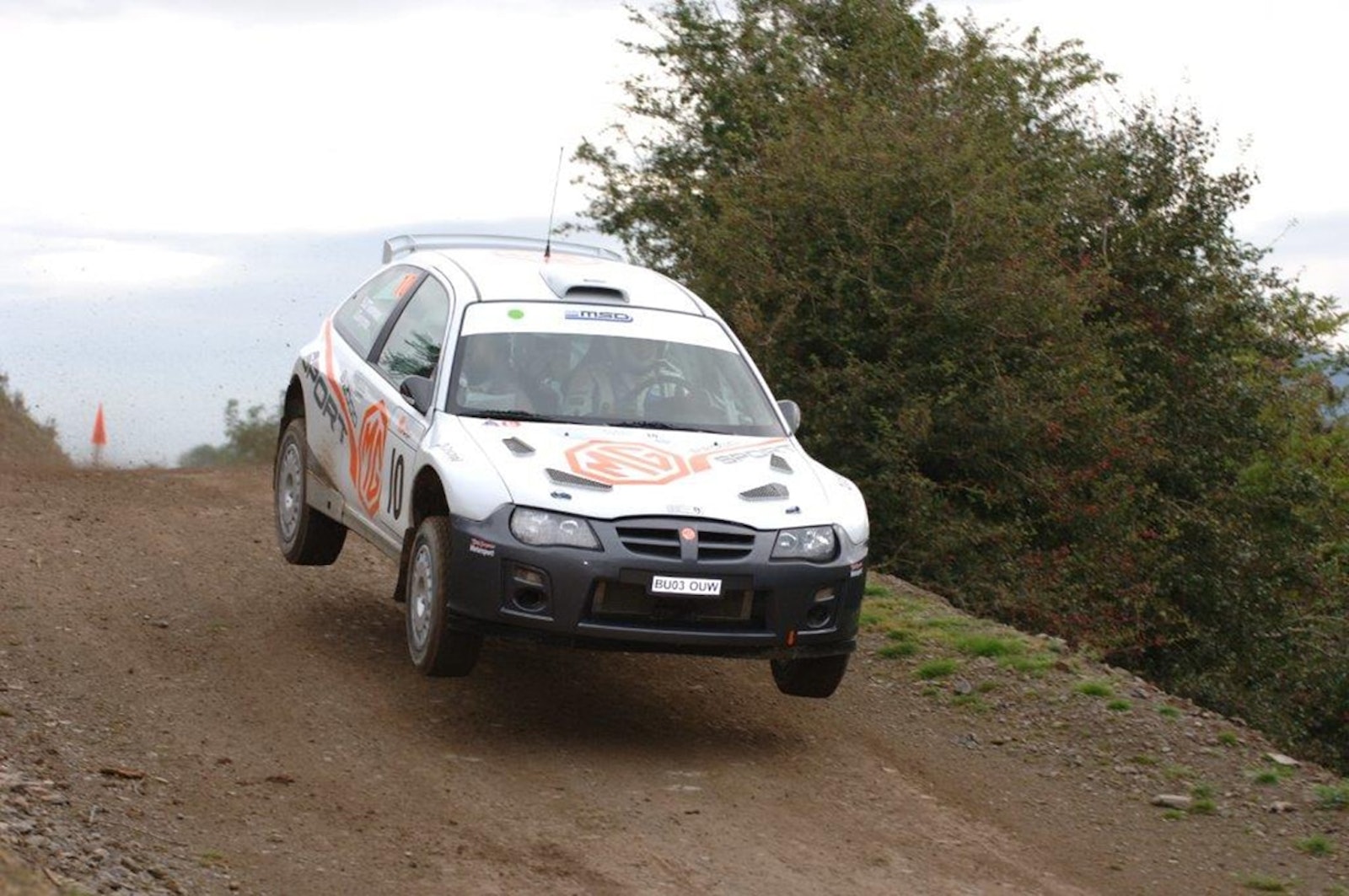 Rimmer had the opportunity to hop in the passenger seat with Martin and Tanak and he had this to say about Tanak, “Ott was FAST” and continued saying, “his precision and anticipation was amazing and his footwork over the pedals was incredible and mesmerizing. As I shook his hand at the end of the stage, I was convinced that I had just sat beside a future WRC factory driver who would undoubtedly grace WRC podiums in years to come”. 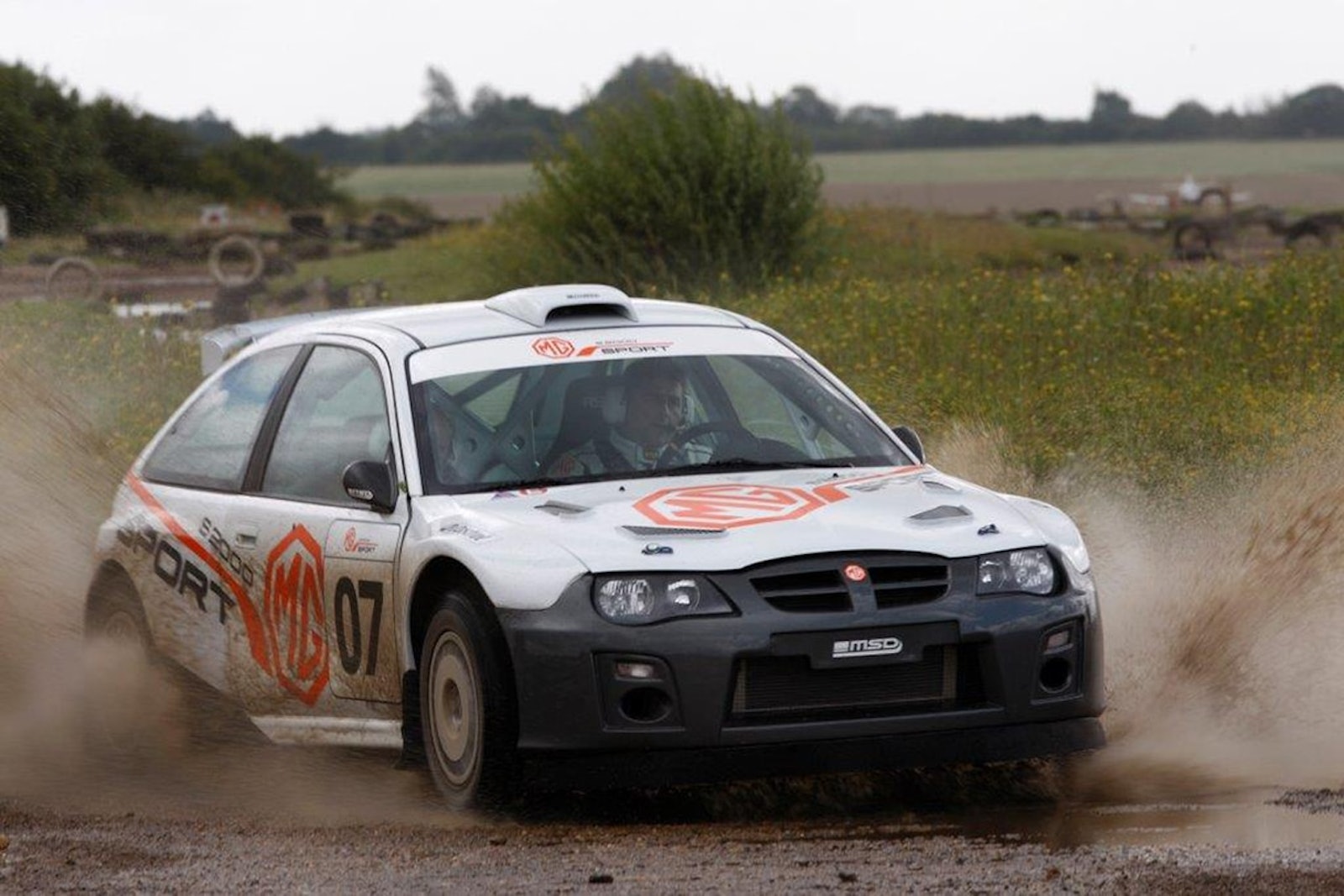 Although there are very few of these beautifully designed cars around the world, the MG ZR S2000 car is a very well engineered rally car that has proven to be competitive many times. It is equipped with some of the best racing technology on the market today and even though it was built 8-9 years ago, it is still a competitive car in multiple rally championships.