Spanning four days each year, the Republic of San Marino plays host to an absolutely amazing spectacle that draws some of the most legendary and rare rally cars of all time. The event is called RallyLegend. From the historic Audi Sport Quattro S1 and Lancia Delta S4 rally cars to some of the latest World Rally Championship cars, they represent something special from every generation of the sport. To make the 15th running of this event even more special, the organizers dedicated this year’s race to the memory of the late Colin McRae who was one of the greatest drivers to ever grace the sport.

With Colin’s “If in doubt, flat-out!” mentality, unbelievable skill behind the wheel and true showmanship, he was always a crowd favorite when he competed. It might be a bit lofty to say, but the sheer flat-out speed we see in WRC today is in part thanks to Colin. Pushing the limits of the cars and roads he drove, Colin also pressed his competitors to do the same.

Thanks to the tribute at RallyLegend 2017, on display for fans was one of the largest collection of cars that had been driven by Colin. The collection included Multiple Group A and Subaru WRC rally cars, a Ford Focus RS WRC in Safari Spec and a Citroen Xsara. There were McRae cars to see in nearly every direction. 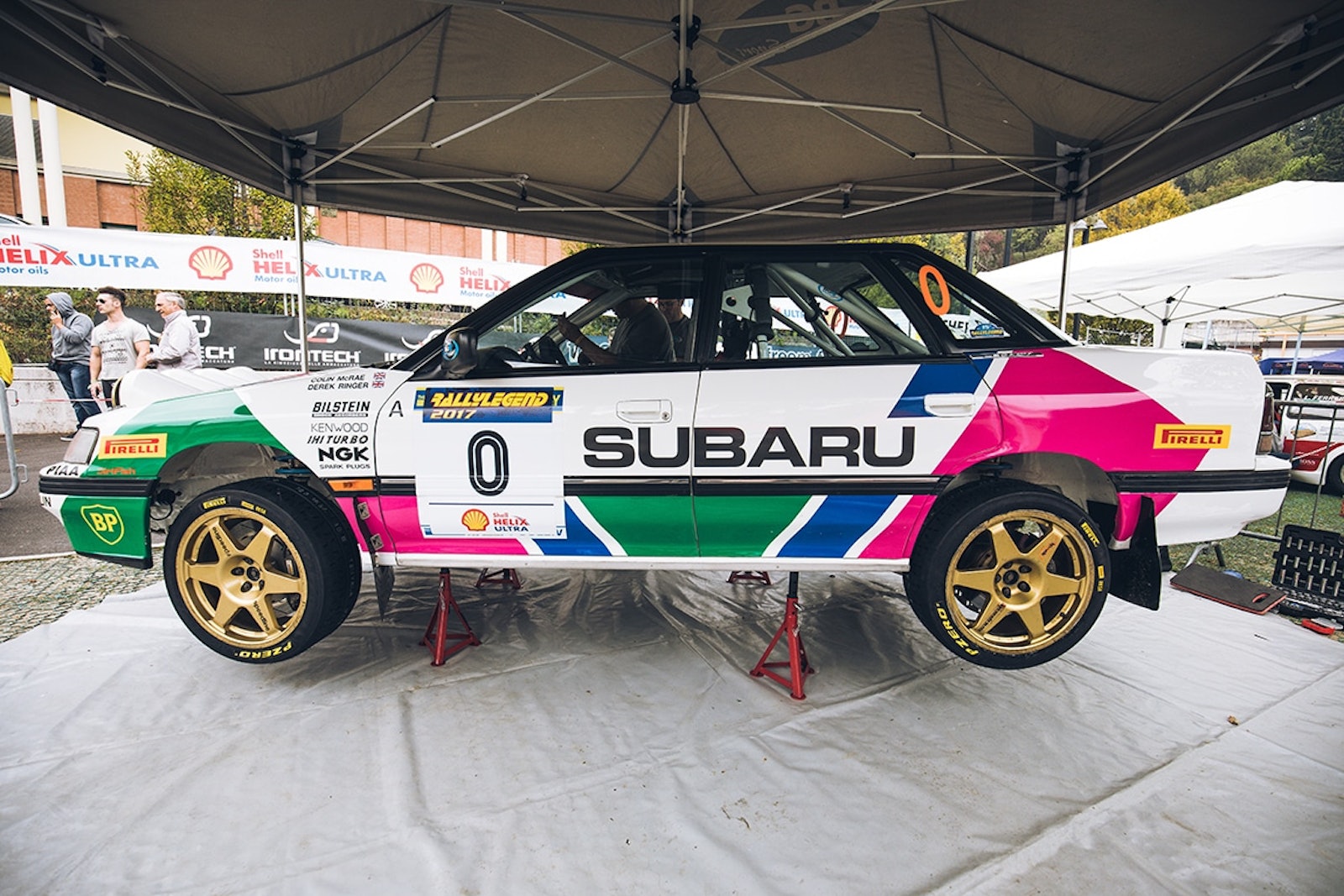 DirtFish staff were in attendance thanks to the owner of DirtFish, Steve Rimmer. He is the fortunate owner of the 1991 Subaru Legacy RS Group A car that was driven by Colin at the 1992 Swedish Rally. Colin competed in the Subaru Legacy RS Group A car for his inaugural World Rally Championship Race and finished in second place. BGMsport Owner, Ian Gwynne, worked tirelessly with the RallyLegend organizers to coordinate transporting the car to the event. It was decided that the Legacy RS wouldn’t be there solely for display. Colin’s brother, Alister McRae would drive the car as course opening throughout the three-day event. If that wasn’t enough, the co-driver sitting in the passenger seat was someone who is very familiar with this car- Derek Ringer. Derek had been Colin’s co-driver during the Swedish Rally in 1992.

Also, in attendance to show their support for Colin and the McRae family were multiple World Rally Champions and current WRC drivers (thirty in total). Drivers included: Sebastian Loeb, Sebastian Ogier, Petter Solberg, Stig Blomqvist and a McRae prodigy by the name of Kris Meeke! Meeke was there to not only to make an appearance, he would also be competing behind the wheel of one of Colin’s Citroen WRC cars. It is one thing to watch a WRC race on TV, but it is something entirely different when seeing it in person. The unbelievable speed and commitment Meeke has on the road is out of this world and at times doesn’t even seem possible… 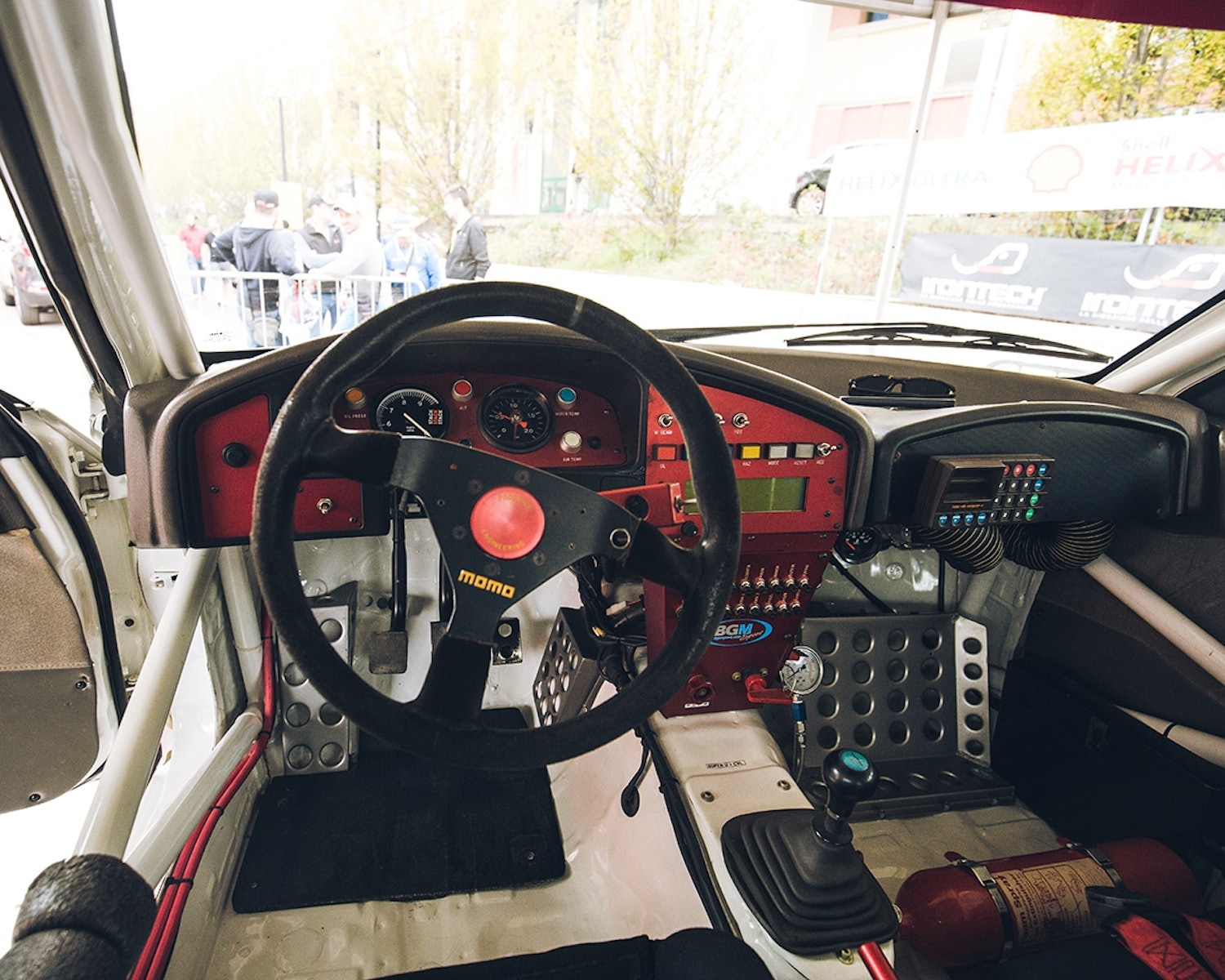 The event began with the introduction of the Subaru Legacy to Alister and Derek who had spent many hours and days with the car when Colin drove it. After being fitted in the car and learning their way around the controls, Alister and Derek set off for a full day of reconnaissance on the twelve special stages. The roads were mostly tarmac and extremely narrow, making them very different from roads used for stage rally in the United States. The stages wound through the farms, towns and olive orchards that dotted the landscape of the small republic. One of the stages even began in the ancient town square of the city of San Marino which was built atop a mountain. The eastern side of the mountain featured switchbacks which crossed back and forth up the mountain to a beautiful castle that had been built on the edge of a cliff.

The RallyLegend event is like no other in the world. It is a place where historic rally car owners are able to bring their collection and drive them as they had been in-period. What a sight and sound this was! The opportunity to see and hear some of the most legendary cars of all time such as the Audi Quattro S1, Lancia Delta S4 and 037, Fiat 131, multiple generations of Ford Escort and of course, ex-WRC Subaru’s at full speed on a rally stage is an experience you will never forget. Simply being in the presence of such greatness was truly an honor for DirtFish!

Being an American, you don’t truly understand how much of a legend Colin McRae was in his era. There wasn’t a single person who wasn’t drawn to his Legacy and his brother, Alister. When you see the number of people who stop and begin to applaud, you realize just how special Colin was.

Another amazing aspect of the race was the sheer love and excitement of the 80,000 fans that had shown up from all around Europe (and the world) to watch. The people are what make these types of events such a special occasion, at times camping on the side of the rally stages for days to stake their claim on a prime location to watch. During the day, you see friends gathered around tents and campers celebrating, people relaxing in lawn chairs and multiple different national flags waving along the sides of the stages. While there are definitely a few individuals that will jump out when their favorite cars are going past, the majority of the spectators are respectful of what is asked of them by the marshals and race control.

On Friday, the rally truly began! The first stages started in the middle of the beautiful medieval city and made their way down the mountain and into the countryside. Although it was difficult to see which cars were approaching in the dark, everyone could tell which car it was by the sounds alone. As soon as you began hearing the distinctive note of a Subaru Boxer engine in the distance, the fans would start whispering, “Alister” and “McRae”, with growing excitement as the loud roar moved closer and closer. Once the Legacy came into sight, there was an uproar from the crowd! They had Vuvuzelas, air horns and sirens. Many people had even modified 2-stroke chainsaws by removing the chain and mounting a funnel on the exhaust to amplify the noise. The older the chainsaw, the louder it was and boy did they make a racket! 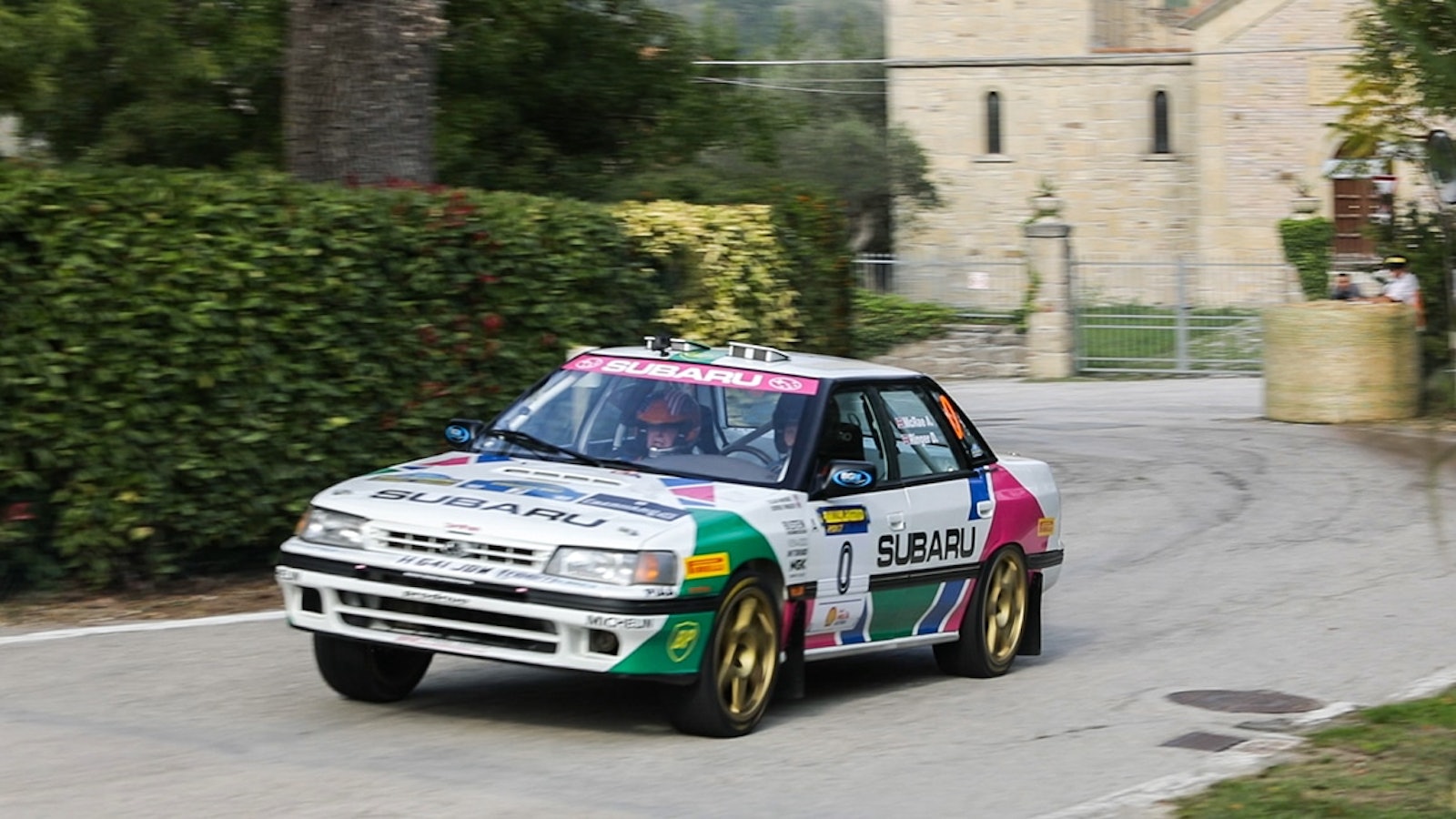 Although this was the first time that Alister had been behind the wheel of the Prodrive-built Legacy RS, he was able to flawlessly drive it as if he had campaigned an entire season in it. Had he and Derek been one of the actual competitive teams, they would have set some of the quickest stage times and been towards the top of the leaderboard. Either way, they were both so happy with the car and had nothing but praises for Steve Rimmer and BGMsport for how well the car performed.

Geared around the racing, Saturday consisted of a full day of stages that wound through narrow roads and small villages in the countryside. These roads allowed the drivers to open up the cars a bit more with longer straightaways and fewer steep mountain roads. There were even more fans lining the roads trying to catch a glimpse of ex-WRC Subaru, Ford, Toyota and Citroen rally cars as they would have been on stage throughout the generations. Following all of the Legends Cars were the actual competitive cars that consisted of a multitude of different makes, models and vintages (some that you aren’t even able to find in The United States). All of these magnificent cars were driven by exceptionally skilled drivers who pushed the limits of their cars around each corner. It was an extremely exciting bit of racing to watch. 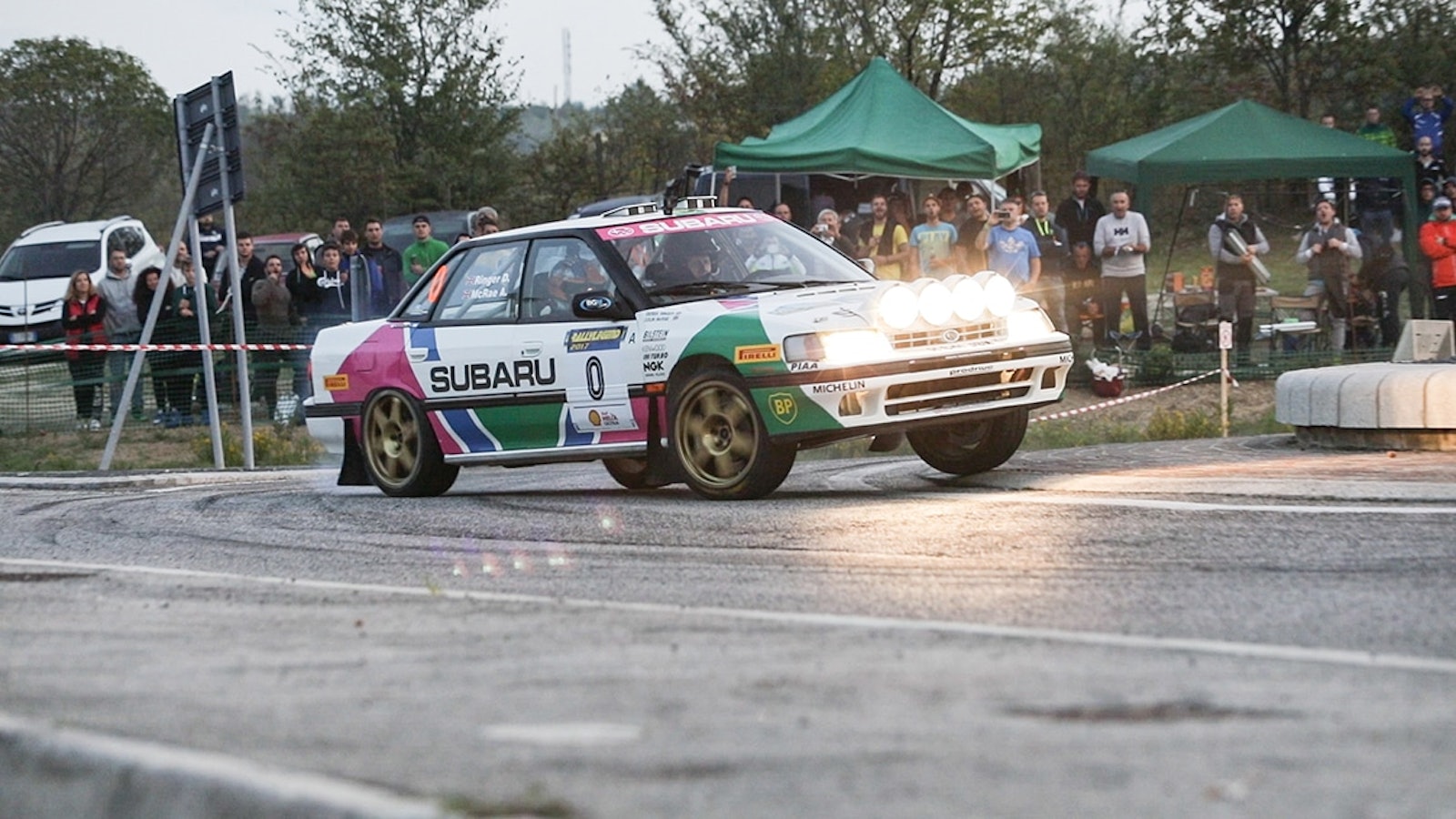 Sunday was the final day of racing and the most special day of the entire event. The day was geared towards the fans and giving them easy access to a stage that the organizers had setup to run through an industrial park. Sunday had by far the largest amount of people in attendance of the three-day event. 80,000 fans had descended upon the small town (for reference, that is double the amount of people who live in the Republic of San Marino). There were only two stages of racing, but what made the day truly spectacular was the Legends Parade. During the parade, all thirty of the World Champions in attendance drove a parade lap through the stage in Colin’s honor. It is difficult to put into words just how special this was for the fans. Each driver would stop and put on a show, doing donuts and making all sorts of noise. Nothing topped when Alister passed by in the Legacy doing donuts and putting on a show as a Scottish flag waved from the passenger window. However, it wasn’t Derek Ringer in the passenger seat this time around… it was Colin’s daughter, Hollie McRae. People cheered and literally stared in amazement. I’m sure some people even fought back tears. It was a beautiful sight to see and something that may never be seen again.

Witnessing Colin’s family accompanied by so many legendary drivers who were there to show their love for the true rally legend during this parade lap was amazing. It was an unbelievably touching end to an event that was a tribute to arguably one of the greatest drivers to ever grace the sport of rally. Thank you for the memory of one man and his achievements.

Being an American who has a huge passion for rally and seeing the way that the Europeans host rally events, left me shell-shocked. Coming from a country where the sport is currently attempting to dig itself out of a hole and regain traction and popularity, it makes one look at it in a completely different light. The passion and excitement of the fans who attend these events is truly amazing!