Sébastien Loeb has retired from this year’s Dakar Rally after hitting more trouble during the second part of the Marathon Stage.

Loeb had started the eighth stage of the event 43rd overall after a miserable opening week which left the nine-time WRC champion more than 13 hours behind leader Stéphane Peterhansel.

After eight punctures before Monday’s stage, Loeb suffered two more and with only one spare, was forced to retire as a result.

Loeb’s support truck had suffered damage on stage seven, breaking a rear axle and not being able to complete the stage in the required time for support vehicles.

Support trucks follow the same liaison and special stages as the competitors, and the Bahrain Raid Xtreme team therefore elected to prioritize Loeb’s team-mate Nani Roma for spares, who is currently fifth overall.

“During stage seven of the Dakar Rally, the support truck, carrying vital spare parts for both cars, damaged its rear axle, forcing it to become two-wheel drive, the support truck ran out of time to complete the stage and be in a position to provide spare wheels and parts to either Hunter,” a team statement read.

“As such, a sporting decision was made to provide Nani Roma’s #311 Hunter with the majority of the team’s available spare tires, to take on stage eight, and preserve the competitive position within the rally.”

Loeb’s retirement ends a disappointing return to the Dakar, having missed the 2020 edition as he and co-driver Daniel Elena prepared for the Monte Carlo Rally with Hyundai.

The pair lost over 22 minutes on the opening stage of the rally after copping three punctures in what Loeb described as “hell”.

Loeb was then penalized five minutes by the event stewards for speeding in a controlled speed zone, after an onboard GPS failure which prevented the alarm from sounding.

The misery continued during Friday’s sixth stage as Loeb damaged a rear left wishbone, forcing them to spend nearly 14 hours trying to get back to the bivouac. 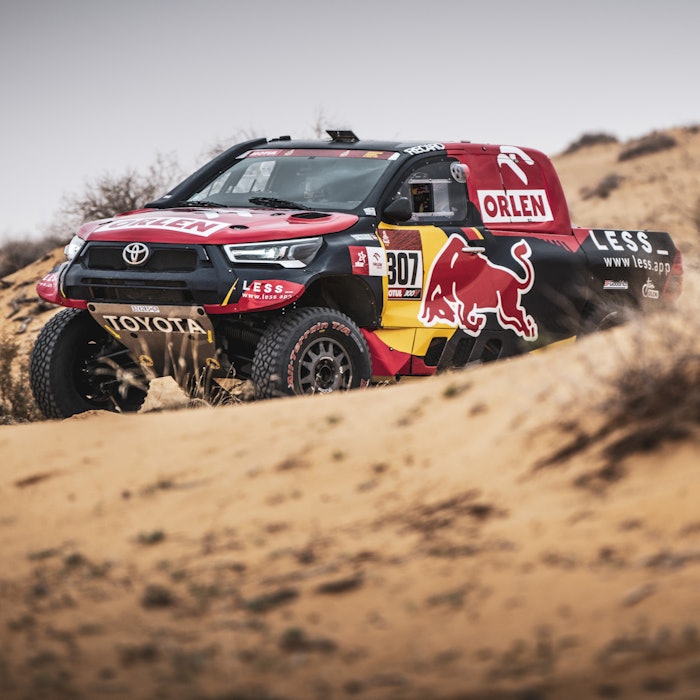