The Dakar Rally organizer the ASO has announced a “100% new” route for next year’s edition, which will remain in Saudi Arabia for a second year in a row.

The Middle Eastern country held the rally for the first time in 2020, and the event will continue to be based out of Jeddah on Saudi Arabia’s west coast.

Scheduled to run from January 3-15, the Dakar is set to take competitors into “uncharted territory” after a number of logistical and sporting changes were announced.

Several safety measures have been brought in for 2021, including the introduction of slow zones, designed to reduce the risk on certain stages across all classes.

The slow zones will restrict competitors to just 55.9mph (90km/h) on particularly hazardous sections, while warnings for difficult 2 and 3 sections will also be available to riders and drivers.

Mandatory airbag vests for motorcyclists will also feature in the new regulations. 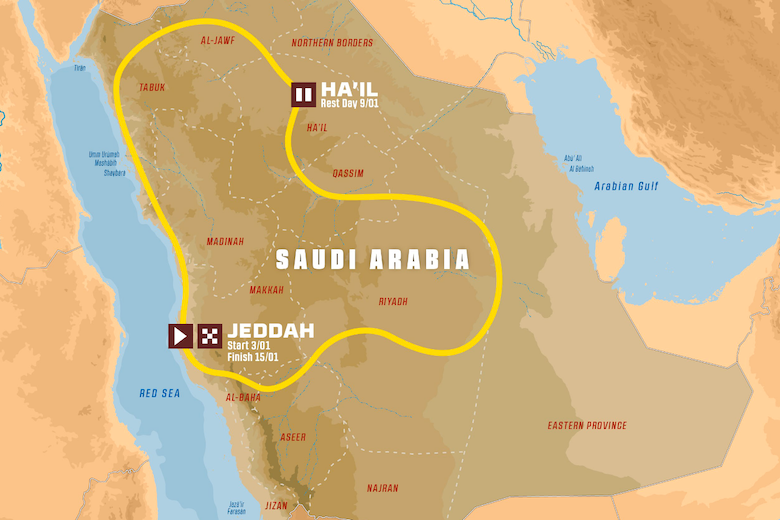 The 2021 event will begin on January 3 with a short prologue in Jeddah, with the initial loop ending in Medina before crews navigate north east towards Ha’il for the rest day on January 9.

Following this stop, the loop resumes with the Marathon Stage before heading along the coast of the Red Sea and finishing back in Jeddah on January 15.

Speaking to press agency AFP, Dakar director David Castera said: “We’ve made the most of all of Saudi Arabia.

“The country is so big that we managed to only use only 50-100 kilometres of this year’s course.

“During each stage we find a bit of all the ingredients. We tried to keep a bit of the dunes, the technical sections and the quick parts each day.”

The organizer also announced that next year’s event will give crews more of a navigational challenge, with road books only being handed out 10 minutes before each special of every stage.

There is also a change to the tire rules, with no tire changes allowed in the car class during the Marathon Stage.