GCK Motorsport has presented the first iteration of its hydrogen powered Dakar Rally prototype with which it will contest the 2024 event.

In two years, the Dakar will move to alternative energy sources for cars and trucks, with the requirement expanding to all competitors by 2030.

Audi has already entered the cross-country discipline with a taste of what is to come as it runs a combustion-charged electric powertrain for its trio of RS Q e-tron T1 cars, while both GCK and Bahrain Raid Xtreme are powered by bioethanol fuel.

It unveiled the first iteration of its vehicle during the official rest day in Saudi Arabia.

“We are very proud to be presenting the first ever hydrogen cross-country competition car with an integrated fuel cell,” said Eric Boudot, the CEO of Green Corp Konnection and GCK Motorsport.

“For Green Corp Konnection, motorsport represents a unique innovation laboratory to develop technological solutions that we will then be able to offer to clients through our industrial activities.

“We are incredibly excited to be involved in the Dakar Future movement and to create more milestones on the road to greener mobility solutions.” 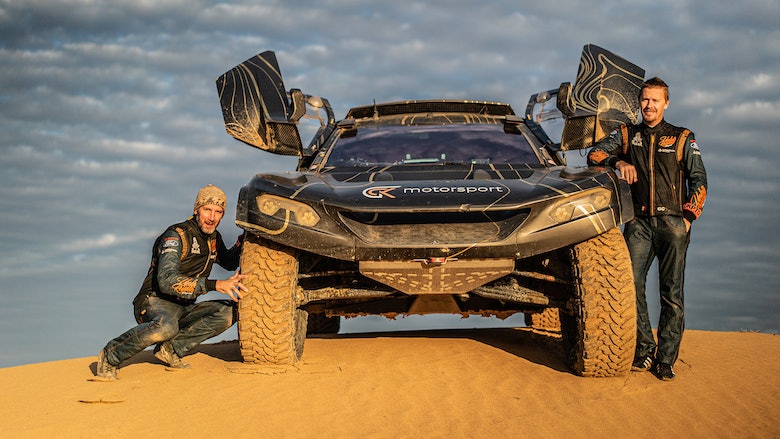 THE INNOVATION FUELLING A VETERAN’S RETURN TO THE DAKAR

The car, which weighs 2300kg, will feature one engine in the rear and produce a maximum power output of 400hp in accordance with the FIA regulation power curve. It has a two-speed, paddle shift gearbox and its 1000Nm of torque will help it achieve a top speed of 180kmh (111.8mph).

The e-Blast H2 will also include an integrated fuel cell, which is powered by 700-bar hydrogen, of which the final volume 30kg (66.1 lbs) will be stored in four R134 certified tanks delivering 200kW of energy.

Speaking ahead of the Dakar in December, Chicherit told DirtFish that the ASO’s new green regulations for 2024 and beyond had been necessary to protect the future of cross-country rallying.

“I think if the ASO didn’t introduce these new regulations, the sport would be in some risk for the future, because manufacturers don’t want to support motorsport programs which are not green orientated,” Chicherit said.

“And I cannot agree more than this. Motorsport has to show an example and I feel strongly about this, and we have to be as green as possible, as quickly as possible.

“It can’t happen overnight, that’s impossible but we need to have real, strong intentions to make it happen, because if you don’t have these intentions, it’ll never happen.

“Biofuel is the first step, the intermediate technology, and then in two- or three-years’ time, hydrogen will take over.”

GCK will now embark on a rigorous testing program in ‘real cross-country conditions’ in the second half of 2022, where it will focus on ‘powertrain optimization’ ahead of a planned participation on selected stages of next year’s Dakar Rally.

How the WRC’s hybrid boost will work