Bahrain Raid Xtreme driver Sébastien Loeb has described his return to the Dakar Rally as ‘hell’ after suffering three punctures on the opening Jeddah-Bisha stage.

Loeb, in his first competitive outing with the Prodrive-run team, lost 15 minutes in the opening section of 22 miles as he and co-driver Daniel Elena were forced to stop and replace two punctured tires.

Loeb got going again but had to change a third tire after the waypoint at half-distamce, dropping another seven minutes. The nine-time World Rally Champion currently sits 18th in the cars classification, 22 minutes adrift of X-raid Mini JCW’s rally leader Carlos Sainz.

Speaking to French television station France 4 on its Journal du Dakar show at the end of the stage, Loeb expressed his frustration at the lost time.

“When you start a special losing 15 minutes, you have the impression of losing half an hour.

“That was at the beginning, then we lost more time with a second puncture, which took far less time than the first one.”

Despite the early setback, Loeb remains hopeful that he and Elena can make inroads into the large deficit to the top 10.

“[To lose] 25 minutes, it’s not great but I had the impression that we lost around 45 minutes in all honesty.

“There’s still a long way to go of course so it’s all to play for.”

Loeb’s issues have a silver lining in that he has a much more favorable starting position for the second stage of the Saudi Arabian event.

Day two heads inland, with the 283.96-mile Bisha-Wadi Ad-Dawasir (of which 141.67 miles are timed) providing around 18 miles of sand dunes from the start. It is double the length of the first stage and one which Loeb can recoup a lot of the time he’s already dropped. 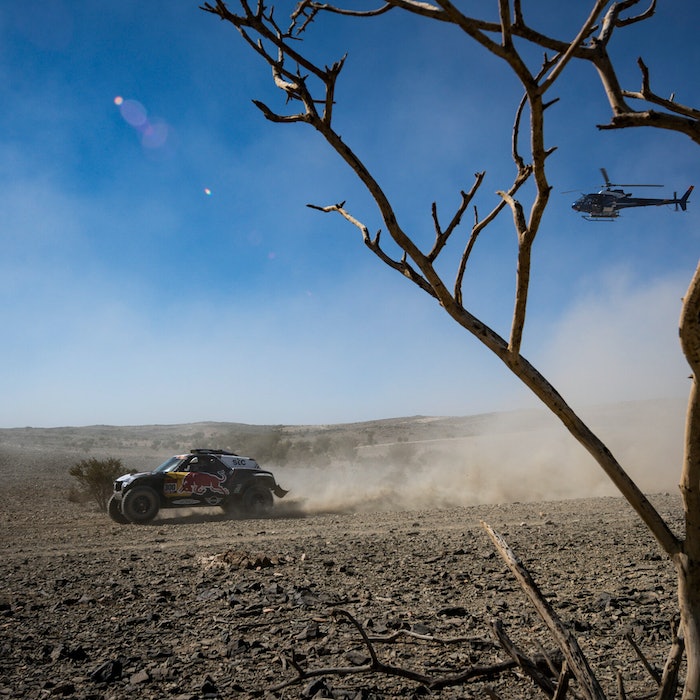 Al-Attiyah: I knew I would lose time as first on the road