Bahrain Raid Xtreme’s Nani Roma says he is surprised to have had a largely trouble-free Dakar Rally so far on his first event with the Prodrive-run team.

Roma, who is a double Dakar winner having triumphed in the bike category in 2004 and then in the cars in 2014, currently lies fifth in the overall classification, one hour and 36 seconds adrift of leader, X-raid Mini’s Stéphane Peterhansel.

Although Roma’s team-mate Sébastien Loeb endured a frustrating return to the Dakar Rally in the opening week, Roma has stayed relatively clear of issues, despite having had to change co-driver just days before the event.

“[Yesterday] was such a great stage, I really enjoyed driving it with the sandy tracks, it was really nice,” said Roma, who was seventh fastest on the final stage of week one.

“We did alright on the day, but we had two punctures and the internal jacks also failed. We tried to repair them but they stayed on.

“So, we don’t know if it is a hydraulic or electric problem and we lost a lot of time. But in the end, we left them out and just continued, 50km from the finish. This was the only issue in six days with this car, which hasn’t been so bad.

“We didn’t expect it to be like this with the new car and new team. We expected to have some failures, and the jacks was the only one so far which means that for everyone, we are really positive.”

In contrast to Roma, nine-time World Rally champion Loeb struggled in the first six days of the rally, suffering a total of nine punctures and damaging a wishbone on Friday that required the support of the assistance truck to pull the car through the stage. 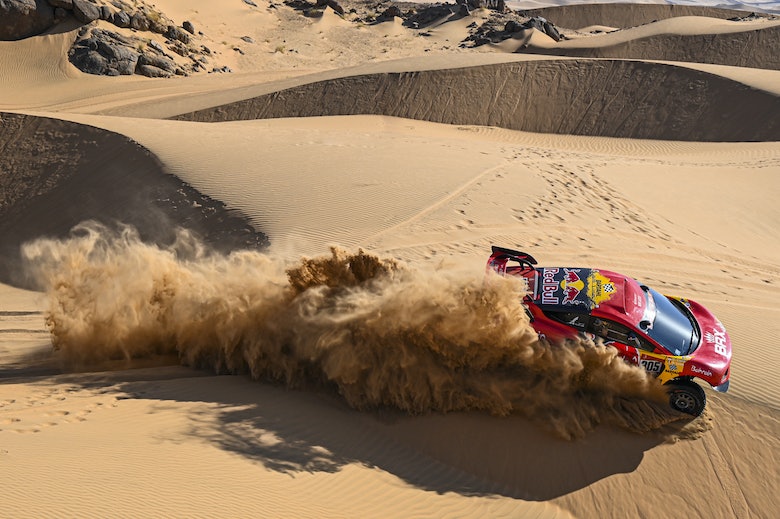 Watch Prodrive explain how it has prepared for its Dakar assault

Loeb and co-driver Daniel Elena spent 14 hours stuck in the desert as they waited and checked in at the control just four minutes before the cut-off time at which competitors are automatically disqualified if they don’t make it back to the bivouac in time.

Having tumbled down the order, Loeb says he is now focused on securing stage wins for the second week.

“We are pleased that we were able to fix it and will be able to compete in the second half of the rally,” Loeb said.

“This is obviously not the outcome that any of us wanted, but we have a good car in the Hunter, and we will continue to compete for stage wins.”