There will only be eight cars contesting the remainder of Extreme E’s inaugural event in Saudi Arabia as Veloce Racing has had to pull out of the Desert E-Prix on safety grounds.

As a result, his team-mate Jamie Chadwick didn’t get to drive the car and now there will be no opportunity to all as the roll cage in the car is damaged and therefore it is unsafe to be driven again.

DirtFish understands that had it been the diagonal bars of the roll cage that were damaged, the team could have replaced them but because it was the main roll hoop that was damaged, that wasn’t possible.

“Damage to the car was the complete bodywork, obviously we have to change the battery when the car’s been upside-down but we have a small crease in the main roll hope and under FIA safety regulations and all safety regulations it means that we can’t continue,” Veloce team manager Ian Davies told DirtFish.

“It is an awfully long way for all of us to come,” he added. “We’re in this together, a group of seven people, five members of staff and two drivers and we’re all gutted.

“It’s an awfully long way to come [to not do much running] and we’ve lost kilometers now compared to the other teams that are continuing racing today and tomorrow. So coming back stronger, wiser in Africa is what we intend to do.”

The loss of Veloce means the shootout race for the lowest qualifiers will now only be between two cars. 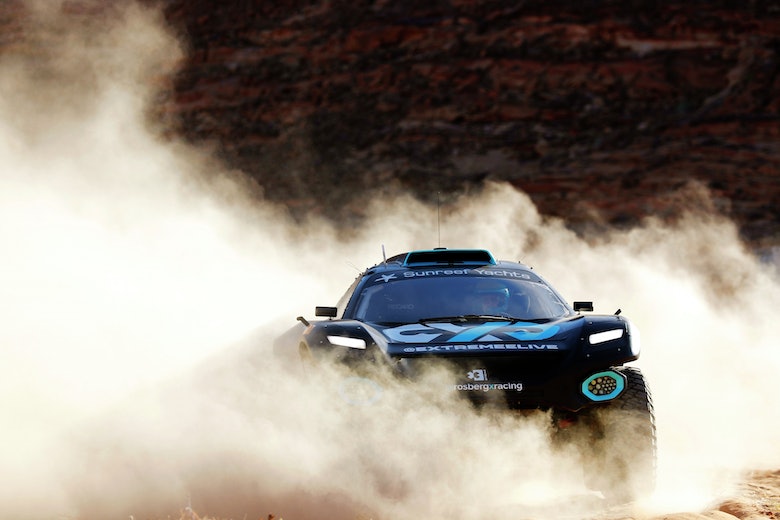 Kristoffersson and Taylor fastest in Q1

Abt Cupra is expected to take part in tomorrow’s shootout race but not Q2 after Claudia Hürtgen spectacularly rolled in the first session.

Team spokesman Marc Schneider told DirtFish: “For tomorrow it’s fine but our aim was to be part of this session.

“From the team’s side of view it would have maybe been possible to do it but we need to change battery so once the guys are finished with the car, all the repairs they need to bring the car over to Spark guys and they change the battery and that will be 1-2 hours.

“All around,” Schneider added when asked what specfically on the car was damaged.

“We’ve replaced almost everything on the car like the rear-left, that was the only part that was half OK but otherwise [everything].”