The Arctic X-Prix officially got underway on Friday with shakedown and free practice giving drivers their first taste of the multi-terrain track at the foot of Greenland’s Russell Glacier.

Despite the cold temperatures during practice, where the 42F air temperature was combined with chilling winds and incredibly rare arctic rain, battery overheating was an issue for several crews and there were other problems also hitting the cars as they were run at full power for the first time since May’s Ocean X-Prix.

Chip Ganassi Racing was the first team to be undone by reliability, with Sara Price completing a controlled first lap before Kyle LeDuc took over. As in the first two events, LeDuc was able to take rougher lines while maintaining speed – although said the team was there to learn the track and “find the pace later” – and was one of the most committed over the jumps too as his higher entry speed gave him less time to pick a line compared to his rivals.

After one of those jumps the car came to a halt as the battery overheated, and after shuffling the Odyssey 21 forward he then called it a day and FP1 was red flagged. LeDuc also revealed that the rear brakes had gone before that point, visible from the flames exiting the wheels.

X44 and Andretti United went out before Ganassi, with Sébastien Loeb enjoying a relatively unrutted course as first out and with only rivers of water – from the unprecedented rain – in the lap’s pond section to contend with. His team-mate Cristina Gutiérrez was a little more cautious, and said that was because she was learning the course rather than taking precautions with her broken back which she says is fully on course with its recovery.

Catie Munnings completed Andretti’s first lap trouble-free, but team-mate Timmy Hansen mistook an early double mound for “a smooth take-off” which launched his car skyward at the front and then rear to his surprise.

From then on he was more cautious of the bumps but still set the fastest lap of anyone at 5m57.941s. Both he and brother Kevin, driving for JBXE, used set-ups that gave them a lot of work at the wheel on the sand but reduced their inputs and made them the fastest for the rockiest sections.

Two of the three cars in FP2 hit trouble, with Rosberg X Racing actually having its issues in the switch zone. Johan Kristoffersson was close to Hansen’s pace until the final rocky section, then as he hit the brakes for the switch zone the car stopped entirely with a yet-to-be determined issue. Over a minute was lost before Molly Taylor started her lap.

Acciona Sainz had its problems after the dune-like first sector of the lap, with the power steering failing. Carlos Sainz brought the car to a halt to reset it, and after a minute got moving again only for the same problem to occur – as it has at previous events – again and again. 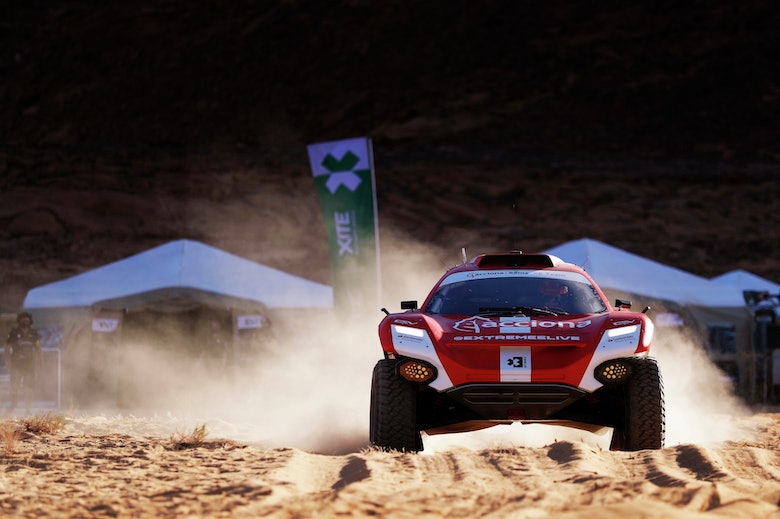 "Positive" Sainz wants to use his experience to help XE

He even shortened the course at one point as he considered bringing the car straight back, but he did complete the lap to hand over to Laia Sanz. She had the same problems recur within 200 meters, and had an interruption-filled run.

The only team to run trouble-free in FP2 ended up as fastest overall. Abt Cupra’s drivers Mattias Ekström and Jutta Kleinschmidt were solid and steady, neither going fastest in any sector, but spent the least time in the driver switch zone and were fairly well matched which meant their combined time was 22.384s faster than next-best Andretti.

FP3 also had a two out of three hit rate, as Veloce Racing was another to be stopped on track entirely by battery overheating after fighting their way through a very rutted track as last on the road. And Kevin Hansen got a rear-left puncture late on his lap that meant JBXE had to dig the car out of the ruts before jacking it up to change the tire when he stopped in the driver switch zone. 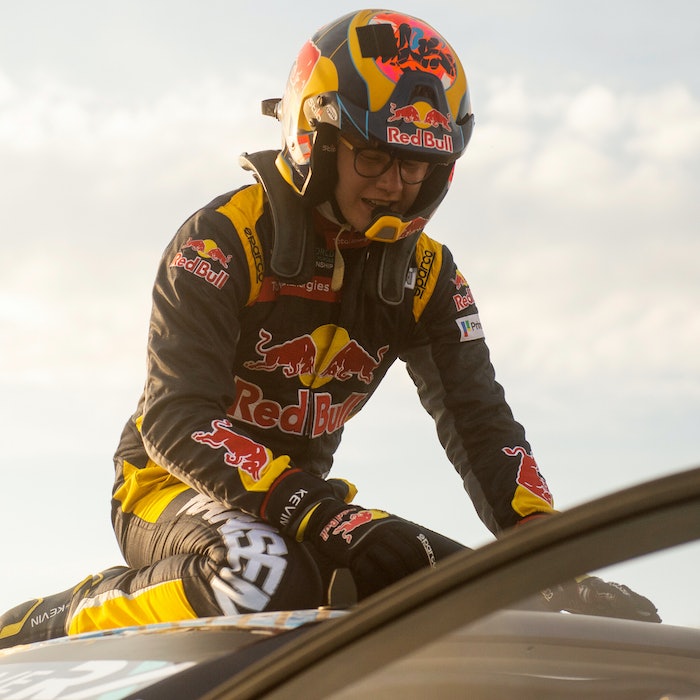 I think it’s pretty funny. I think we’re very much alike in what we do, and both of us are very quick which is also nice Kevin Hansen on his similar driving style to Timmy Hansen

His team-mate Mikaela Ahlin-Kottulinsky came to a halt almost immediately when she took over, but once that was solved completed her lap fine. DirtFish asked Hansen about the flamboyant driving style he and his brother Timmy were using, given the pair were not only the fastest but were also taking striking similar lines through tight corners.

“Yeah I think we have quite similar styles, a bit different, but it’s quite funny,” Hansen said. “We walked the track yesterday and I had an idea where I wanted to go, and almost everywhere Timmy has chosen the same line.

“I think it’s pretty funny. I think we’re very much alike in what we do, and both of us are very quick which is also nice. And mum and dad at home are very, very proud. So it’s nice to be here and perform.”

Avoiding trouble in their session was Xite Energy Racing, who were among the slowest at the start of their run but rose up the leaderboard with each split where their rivals had gone wayward. Oliver Bennett and Christine GZ ended up fourth fastest overall.

Every car was running at 275kW during practice, increased from the last round, but one team told DirtFish that it was “way beyond the limit” for a full two laps and believes power could be reduced for qualifying.