Team X44 has topped qualifying Extreme E’s Arctic X-Prix but car problems have continued to plague the teams, with half of the crews hitting trouble in Q2.

Veloce Racing was first out with Stéphane Sarrazin in sunny conditions, and by gate one he had already lost power steering. With an uncooperative car he ended up taking some alternative lines through the dune section of the lap before stopping entirely to reset the car.

He was cautious thereafter as there wasn’t a total fix, and team-mate Emma Gilmour had to contend with the same issue. To compound things further, a seven-second penalty was handed out for missing a gate and meant they ended up over a minute-and-a-half off the Q2 pace.

Next up was JBXE, and Kevin Hansen was in the car. It was Hansen’s first lap of the day after the team retired in Q1 before he got in the Odyssey 21, and he wasn’t overly cautious on a track that had evolved heavily since he drove it on Friday.

As he completed his run to hand over to Mikaela Åhlin-Kottulinsky, the car stopped suddenly as he braked for the speed limit of the driver switch zone. He lost 30 seconds before he could get going again for the short distance to the switching bay, where he shared his thoughts. 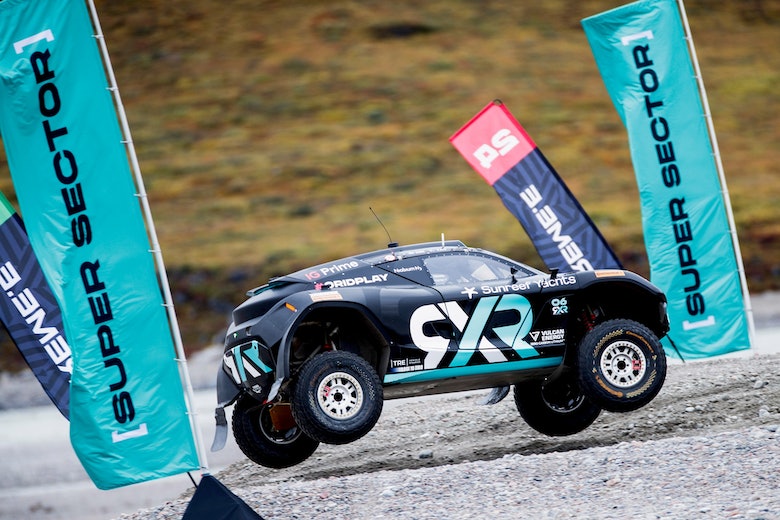 What happened in Q1

Åhlin-Kottulinsky’s lap was also risk-free until the end, where she clouted a huge stone in the ‘rock garden’ section.

Xite Energy Racing ran third, but the team’s lap never really got going as Oliver Bennett had a lack of power that left him trundling across the glacial riverbed. He even checked if the handbrake was still on such was his slow speed, and the team told him that he needed to be in engine map five.

“I’m in map five, I tried map six, nothing. No power!” he exclaimed on the radio; the power of all cars being turned down to 200kw for Q2.

In the dune section he stopped to work on it, and after a long time it seemed he had a fix as he got going again. It was not so, as the car didn’t even have the power to deliver enough traction to get up the next hill. Bennett reversed back down it and drove solemnly back to the paddock.

Abt Cupra’s drivers were rewarded for their smooth driving and vision in Q1 with second place, but in Q2 only one of them drove. Mattias Ekström contended with a severely rutted opening section, found his rally-style use of the banks wouldn’t work in the lake section as the surface was too soft, and then in the ‘rock garden’ discovered the cost of pushing the limits as he knocked both rear wheels.

The left tire deflated and the back of the car dropped, while the sheer force of the impact on the right tire actually made the wheel rim almost square. No amount of jacking, wheelguns or kicking from underneath the car – as Ekström did in the switch zone – was going to get a circle tire off a square wheel and while team-mate Jutta Kleinschmidt did get in the car she had no chance to drive before the team was retired from the session.

There was a delay before the next crew, as Rosberg X Racing was supposed to run but had yet to be signed off by scrutineering to compete after Molly Taylor’s Q1 roll, and it meant Chip Ganassi Racing was next out. After one minute, they were also the next crew out of action.

Kyle LeDuc was at the wheel, as the driving order is rotated from Q1, and his high-risk approach backfired as going past a mount the rear-right wheel of the car struck it in a forward-moving direction meaning all the forces were applied opposing the direction of travel.

The entire corner of the car was ripped off and Q2 was red flagged. His team-mate Sara Price said it could have been a part failure that caused the dramatic deconstruction, as LeDuc was not expecting an impact to take place on the line he chose.

During the lengthy delay that followed it started to rain, giving the four remaining crews a different challenge. Sébastien Loeb adapted to it well for X44, going particularly fast in the riverbed section, and team-mate Cristina Gutiérrez followed up with a clean lap to send X44 to the top of the qualifying times.

Andretti United followed and the increasing rain, rarely seen in Greenland, made for spectacular moments when Timmy Hansen was at the wheel as he took alternative lines looking for drier sand. He bettered his brother’s benchmark for the fastest lap of the session by 0.410s, but the experience of the final two crews meant he wasn’t fastest for long.

Multiple Dakar Rally winner Carlos Sainz used guile to find the fastest route around the changing course for Acciona Sainz, but his team-mate Laia Sanz admitted she wasn’t as confident and they ended up fifth fastest overall.

The crew that ended up being fastest in Q2 was RXR, with Taylor and three-time World Rallycross Champion Johan Kristoffersson stunning as a storm struck.

Kristoffersson pushed so hard he took out a camera, and was 2.5s faster than anyone else. Combined with Taylor’s lap, it not only put them to the top of Q2 but in the intermediate points from the two sessions brought RXR up to third behind X44 and Abt.

Block takes time back but Pastrana set for Ojibwe victory