Portland, Oregon. – June 3, 2019 – Subaru Motorsports USA drivers David Higgins and Travis Pastrana took the top two positions at this weekend’s Oregon Trail Rally, with Higgins earning his first victory of the American Rally Association (ARA) season with a dominant performance in his WRX STI. Pastrana, making his 2019 rally debut, led early in the weekend but was unable to fend off a relentless push from Higgins on the event’s second day.

The rally kicked off Friday night with a pair of 3.2-mile special stages at Portland International Raceway. Higgins and Pastrana led from the outset and were separated by just a tenth of a second after the first running of the stage, but Higgins clipped a rock on the second round and picked up a tire puncture that cost him crucial time. With two days of long, fast stages ahead, Pastrana and co-driver Robbie Durant led Higgins and Craig Drew by 12.7 seconds. 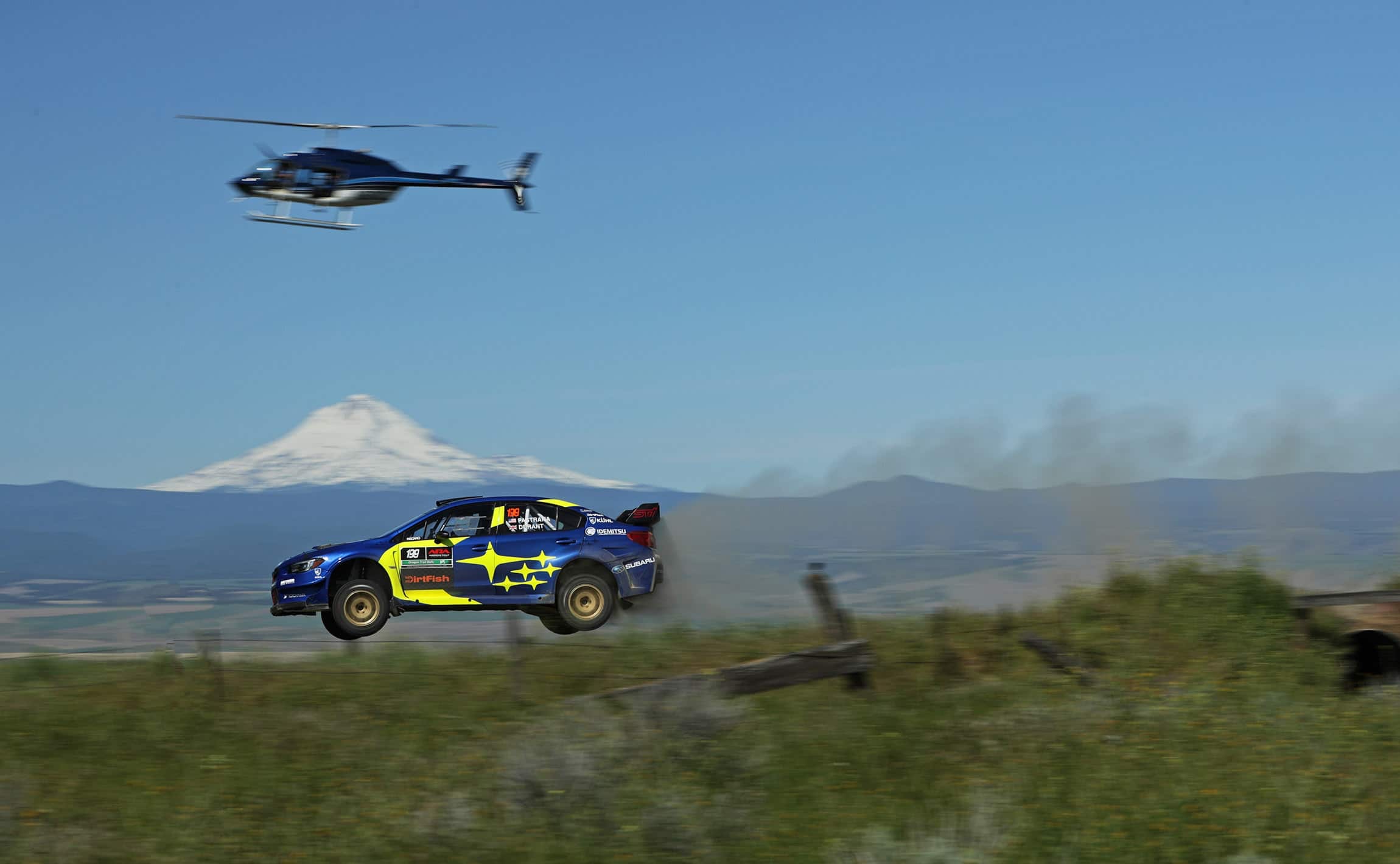 Higgins responded immediately at the opening of Saturday’s stages, cutting the gap to Pastrana by nearly half on Stage 3. The nine-time national champion stayed true to form throughout the day, keeping the pressure on the rest of the field with fast, consistent drives in his WRX STI. By the time the dust settled at the end of Day 1, Higgins and Drew had swept all seven of the day’s stages and stormed into the rally lead; the gap to Pastrana and Durant was 16.1 seconds, with third place more than two minutes back. A spin for Pastrana early on Sunday widened the lead, and Higgins and Drew maintained a quick but conservative pace for the rest of the final day to bring home the win.

“It’s a great feeling to be on top of the podium again here at Oregon Trail,” said Higgins. “Craig and I have had some small mechanical issues so far this season that have kept wins just out of reach, and it’s tough when you feel like luck isn’t on your side. This weekend we switched out our usual number 75 for the defending champions’ number 1, so maybe that helped change our fortunes just a bit. Either way, it’s good to get the win and put our season back on track.”

“We felt really good in the car and had a lot of fun out on the stages – just seemed to lose little chunks of time here and there,” said Pastrana. “Made a mistake on day two and that pretty much put the win out of reach, but I have to give it to David. He was just really, really good this weekend.”

Higgins and Drew will be back in the #1 Subaru WRX STI at Idaho Rally International in June alongside Oliver Solberg and Aaron Johnston, while Pastrana and Durant will return at August’s Ojibwe Forests Rally. Subaru Motorsports USA also opens the 2019 Americas Rallycross (ARX) season June 8-9 at the Mid-Ohio Sports Car Course.

About Subaru of America, Inc.
Subaru of America, Inc. (SOA) is a wholly owned subsidiary of Subaru Corporation of Japan. Headquartered at a zero-landfill office in Camden, N.J., the company markets and distributes Subaru vehicles, parts and accessories through a network of more than 630 retailers across the United States. All Subaru products are manufactured in zero-landfill production plants and Subaru of Indiana Automotive, Inc. is the only U.S. automobile production plant to be designated a backyard wildlife habitat by the National Wildlife Federation. SOA is guided by the Subaru Love Promise, which is the company’s vision to show love and respect to everyone, and to support its communities and customers nationwide. Over the past 20 years, SOA has donated more than $145 million to causes the Subaru family cares about, and its employees have logged more than 40,000 volunteer hours. As a company, Subaru believes it is important to do its part in making a positive impact in the world because it is the right thing to do.