Higgins returned to rallying and the ARA on NEFR for the first time since 2019, driving for McKenna Motorsport – chief rival to his old employer Subaru Motorsports USA.

Team leader McKenna had led the event in his up-to-date Ford Fiesta WRC before a puncture and then a mechanical problem related to the gearbox ruled him out of the running. Ken Block was also sidelined with transmission trouble. 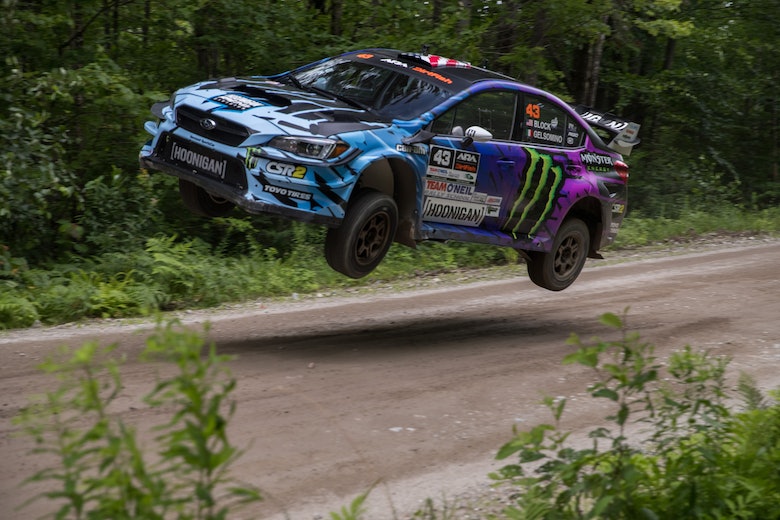 That left Higgins and old rival Pastrana at the front of the field, duking it out for victory. Pastrana had held a nine-second advantage over Higgins with two stages remaining but crashed a quarter-mile from the end of the penultimate test, all-but handing Higgins a victory that he would duly deliver.

Pastrana admitted his accident was “pretty inexcusable” and rued the fact that “he ran out of talent” just four miles from the end of the rally.

He still leads the ARA National points after five of nine rounds, 30 points clear of McKenna and 17 up on team-mate Brandon Semenuk, but squandered the chance to inflict further damage upon his rivals in the title race.

Higgins, whose job was primarily to assist his team-mate McKenna’s title chase against Pastrana, told DirtFish: “Really for them they’ve dropped a bit of a clanger this weekend because when Barry dropped out and had his problem they could’ve brought some things [home].

“But Travis is just a true fighter and he said to me he would rather crash trying to win that let me beat him. It was good to be back against the boys, it was good to compete against them rather than with them.”

Dissecting his comeback victory, Higgins added: “It’s amazing really because like I said to Craig [Drew, co-driver] when we stopped we never really planned to stop it just sort of happened, and you never know when that feeling of winning is going to come back again.

“But the McKenna, [Dom] Buckley team have done an unreal job, the car hasn’t missed a beat all weekend.

“I’d say we’re probably still maybe [at] 90% of what we were doing for,” he said. “When we were in the previous car we knew everything the car was going to do in different circumstances and that makes it easier. But it was better than I expected having been so long out.

“Since I started rallying in 1992 I’ve never gone more than three months or four months without doing a rally so now to have that almost two-year break and a really major injury with my leg – my leg’s still probably only 80% at the moment.

“I think if we can get back to full fitness and a little bit more time I think we can be even stronger again.”

Higgins’ synopsis of Pastrana’s error is a broadly fair one – particularly as Pastrana himself agreed it was a needless mistake to make in the circumstances. However, the true expense of the mistake will only be known come the end of the season.

If McKenna ends up stringing together a devastating victory run – which on pace, he’s absolutely capable of doing – then this one could really haunt Pastrana. Banking 17 points for second place was surely the safer option than glory, but try telling any rally driver that when they’re engrossed in an all-out battle for victory. The devil on the shoulder, screaming at them to take the glory, is always going to be heard louder than the tactically thinking angel.

The crash in isolation is more than forgivable though given how much Pastrana has improved over the last 12 months. After all, this was the first major error he’s made all year. So yes, he did drop a clanger to use Higgins’ words but it’s a very minor blot on an otherwise flawless copybook in 2021.

However, you do almost have to wonder if Pastrana would have made the same mistake had he been up against Block, McKenna, or Semenuk. He has proven this year he has the beating of them, but Higgins is a different quantity as his old mentor. Perhaps the psychological position that put Pastrana in was a bit too much to handle.