Seeing the famous Monster Energy colors Ken Block has raced with for almost 20 years on a Škoda is right up there with the biggest surprises the last 12 months in rallying have thrown up. The Fabia R5+ he will race on the 100 Acre Wood Rally looks mean and purposeful, but it certainly takes some adjusting to!

In truth, seeing Block’s name on the entry list in anything other than a Ford was always going to cause a wave as his exclusive, decade-long relationship with the brand came to end at the end of 2020.

But Tuesday’s news that the Head Hoonigan in Charge will be driving a Škoda – in R5+ specification for added horsepower – on this weekend’s 100 Acre Wood Rally was nothing short of massive.

It’s a big coup for the Škoda brand which, despite a strong history that stretches back over 30 years, hasn’t always been the most adored or even respected on the rallying scene.

It wasn’t long ago that the Czech automaker was something of a laughingstock on the global rallying scene until the Fabia S2000, R5 and then Rally2 evo firmly changed that perception.

The numbers speak for themselves. Since the Fabia R5’s inception in 2015 it has scooped over 2500 podium finishes around the world and in excess of 1150 rally victories too.

However, the bulk of that success has been in Europe and certainly not in the USA. The brand isn’t an established one in the Americas and indeed the Fabia Rally2 has only ever tackled four rallies in the US.

Over the course of his 18-year rallying career, Ken Block has never driven anything other than a Subaru or a Ford. It’s quite the step-change to see him driving a brand with potentially less pedigree and most certainly less sex appeal than those two giants of the US market.

Expecting anything short of a victory challenge would be naive, however. Block might be down on seat-time compared to his chief rivals Barry McKenna and the two Subaru Motorsports USA cars of Travis Pastrana and Brandon Semenuk, but there’s arguably no better car for him to be driving and no better rally for him to be entering than the Fabia on 100 Acre Wood. 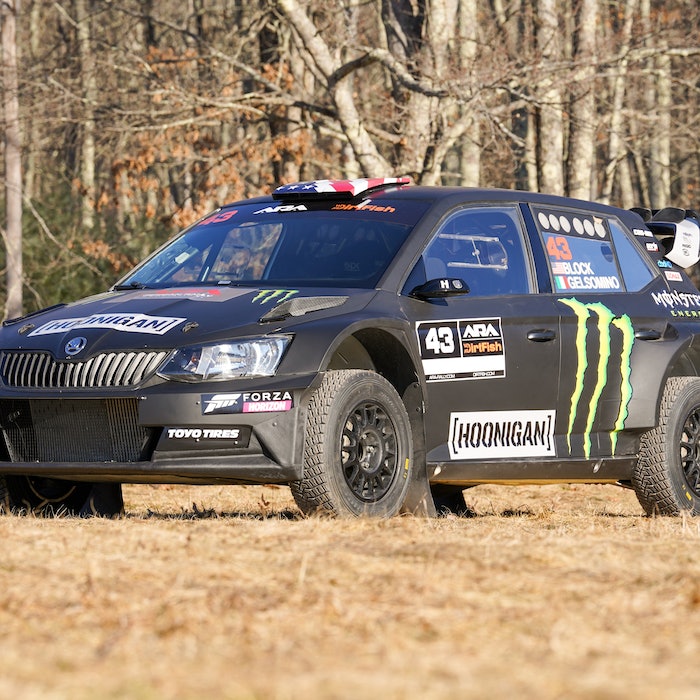 Despite being new to the rallying world, the R5+ has achieved some pretty handy results in the hands of Barry McKenna

Block’s personal form in Missouri is mighty with seven wins from just nine starts, while the Fabia has won two events from three starts in the ARA in the hands of reigning champion McKenna. Its other start was on the New York Forest Rally, an ARA Regional event, where Ryan Booth had to retire with suspension damage.

McKenna entered Rally México in the World Rally Championship back in March in what was a brand-new chassis, but it was his presence on the Southern Ohio Forest Rally – the first championship round to run after coronavirus – where he made history as it was the first ever rally start for a Škoda in the US.

Proving the car’s competence, McKenna duly won straight out of the box but was narrowly beaten by Pastrana’s WRX STI on the Ojibwe Forests Rally. He then switched to his Ford Fiesta WRC for Show Me Rally – an event that used the same stages as 100 Acre Wood Rally – before reverting back to the Fabia for the season finale, the DirtFish Olympus Rally, which he also won.

It’s quite some formbook, giving Block a lot to live up to this weekend. However, as his aforementioned record shows, absolutely everything suggests the Californian is more than up to the task. His Rally2 form is even extraordinary with one start and one win on last year’s Rally Barbados in a Ford Fiesta Rally2; his last competitive appearance.

Either way, there’s an exciting chapter poised to be written in Škoda’s growing rallying history with a megastar in Block behind the wheel. Odds are, it’ll produce a happy ending.