American Rally Association presented by DirtFish National champion Travis Pastrana has taken an early lead of the Oregon Trail Rally as Kyle Tilley crashed out of the opening superspecial stage.

As is traditional, the three-day Oregon event kickstarted with two stages at Portland International Raceway, but RC2 contender Tilley wouldn’t even make it through the first one.

They often say you can’t win a rally on a superspecial but you can certainly lose it and he found that out to his cost when he rolled his Ford Fiesta R5 on SS1 and damaged it beyond repair. He will therefore take no further part in the rally this weekend.

Out front, Subaru Motorsports USA’s Pastrana was edged to the opening stage win by Ken Block’s Hyundai i20 Coupe WRC, but a superior run on the second pass lifted Pastrana into the overnight lead for the first time this season – 3.2 seconds up the road from Block.

Championship leader and last year’s Oregon winner, Brandon Semenuk, was third fastest on the first run of Portland International Raceway but also got the better of Block on SS2 to sit third overall.

The Subaru driver  remains close to the rally leader too with just a five second deficit to his team-mate.

Tom Williams has settled into an early fourth overall in his Ford Fiesta Rally2, and as the second of only two RC2 entrants this weekend he now simply has to finish to guarantee class victory following Tilley’s spectacular demise.

Dave Carapetyan is sixth overnight in his Subaru, just 1.5s up on returning L4WD class rival Jeff Seehorn while Derik Nelson leads the two-wheel-drive runners in his Subaru BRZ. 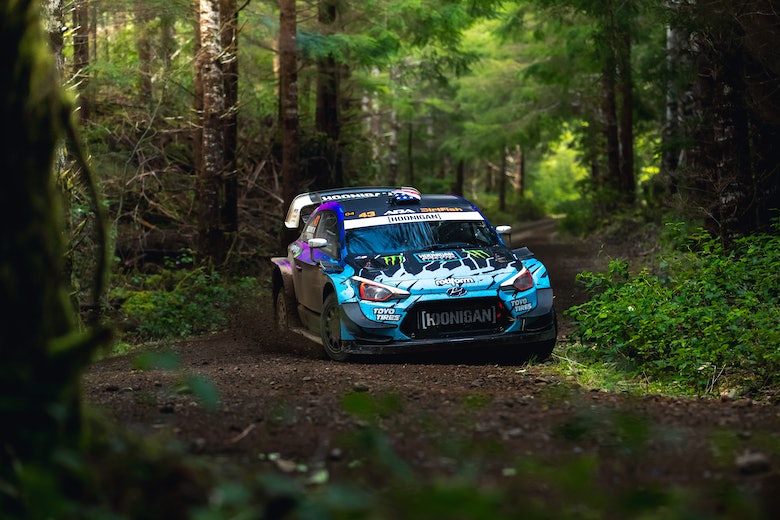 He leads Sam Albert’s Subaru by close to 10 seconds at this early stage.