“I never think of myself as a female in a male-dominated sport. To me, we all have a helmet on, and we’re all here to win.”

This is what it means to be truly entrenched in your sport. To care not about the hair day you’re having or whether you’ll make it home for dinner.

What matters is how quickly you change the busted tire, or calling pacenotes at the perfect time. Under the helmet, all that matters is speed, and whatever it takes to find it.

This is the life of Rhianon Gelsomino, and rallying is in her blood.

Growing up on the dusty gravel roads of Australia, Rhianon was raised with a speedway driver father and two younger brothers who would quickly find themselves in a driver’s seat. Soon, it only made sense to sit Rhianon in the passenger’s side… a classic dad idea.

Upon reminding him of how carsick she gets, her father said: “Take a dramamine.” Suddenly, she found herself at the center of it all, co-driving her first rally in 2005. Since then, Rhianon and her brother Brendan have driven over 80 rallies together, pulling in silverware everywhere they go.

Perhaps the reason Travis and Gelsomino work so well together is because of their dare-devil tendencies. When Pastrana offered to take Gelsomino skydiving the day before the Olympus Rally, there was no hesitation before she said yes. According to her Apple Watch, her heart rate didn’t even blip. She doesn’t take dramamine anymore.

But the perfection in Gelsomino and Travis’s partnership lies in the days before a rally; hours of preparation and meticulous calculations, 3am wake-up calls, 2am bedtimes, absolute mastery of their sport.

Of course, this is rallying, so despite all of this hard work, sometimes things go a little wrong; like when Gelsomino is looking down at her notes and suddenly hears “this is gonna hurt”, and raises her eyes just in time to feel a hard landing over an uncomfortably steep crest. But all it takes is a brief stint of swearing and the stage ends in giggles – the way a good stage always does.

Gelsomino also knows the reality of things going really wrong. In 2009, a brutal wreck at Rally South Australia left her with nine broken bones, and a mechanical issue at Oregon Trail Rally in 2014 left her with burns so severe that turning on the stove was challenging.

After accidents like these, she says “I’ve found that the fear lies in remembering the crash”, and speaking about the Australian crash specifically, she says it “was too traumatic to even hold in our memories.” She still doesn’t remember a single second of it. After going through sports therapy and a few test drives, she was deemed physically and mentally fit to return to her sport, and hasn’t wavered since. 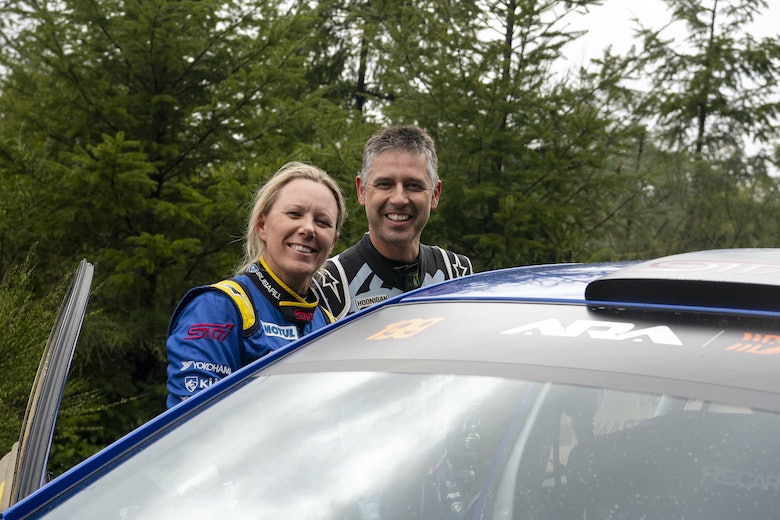 Gelsomino’s love for rallying doesn’t end at the conclusion of the race either. She’s dedicated her entire life to it. Back home in Idaho, Rhianon and husband Alex Gelsomino run OzRallyPro, an advanced rally training co-driving course, aimed at teaching anyone and everyone the art of co-driving.

It helps that Alex is also a full time professional co-driver for Ken Block – if one gets sick, there’s always a back up. Speaking from a personal place, I’ve experienced these two over dinner. Apparently, you never run out of “car stuff” to talk about. Except, sometimes, for an interlude to talk about the wonders of vegemite.

As one of only a handful of full-time professional co-drivers in rallying outside the World Rally Championship, Gelsomino prioritizes being a powerful image for girls and young women to look up to. She believes social media is a useful tool to help this and says “the important pictures to post are the ones where I have helmet hair, covered in grease and sweat, checking tire pressure before we start the next stage.”

However, the biggest message she wants young girls to hear is this: “Take the risk. It doesn’t have to mean risking your life in a rally car. It can be leaving a reliable job you don’t like for an unreliable one that you love”.

This is how Gelsomino lives her life – with passion, without fear, with grit and determination, and with immense love. The last piece of advice she preaches (and practices) is perhaps the most important thing you need to know…

“Just be sure not to tell your mom what you’re doing until it’s over.”

Block to work with Audi exclusively on electric projects