The World Rally Car is becoming a thing of the past.

In the World Rally Championship, it’s the Rally1 breed that leads the line. And on national rallies, most – if not all – top drivers have switched to Rally2 cars, given they’re FIA homologated and – cover your ears WRC car fans – quicker in most instances too.

Dane Skeete’s victory on Rally Barbados with his raucous Subaru Impreza S12B WRC, therefore, was not just a win for him but a victory for the older generation too.

On the small 166-square-mile Caribbean island, the World Rally Car has still predominantly been regarded as king. Aside from Ken Block’s 2020 Rally Barbados win in a Ford Fiesta Rally2, a WRC car has won the event every year since 2002.

But could its reign now finally be up here too? Peer down the entry list of last weekend’s event, and Skeete stood alone as the only driver in a World Rally Car. Conversely, there were 14 Rally2 or R5 cars – an island record.

“They’re now at the sharp end. It’s not a case of a driver not being sure what to get or where to go, and from the time that happened the class exploded. There is no question in my mind that we will see Dane Skeete next year in a Rally2 car; what flavor it is I don’t know but that’s going to happen now.

“Ultimately the top class on the island now is Rally2/R5, for sure.”

This boom has prompted action – the creation of the FIA R5 Championship.

“Last year, the Barbados motoring federation came up with an idea to administer an R5 championship,” Barnard continued.

“It would be run and encompass a range of events, so not just rallies. They looked at doing some sprint events, some acceleration tests, some other types of autocross tests so it became a true national championship, but just for that class.

“This year is the first year that it’s happening and it’s been fairly hotly contested. Last weekend I would have said the smart money was always on Stuart Maloney but obviously he didn’t finish the rally. 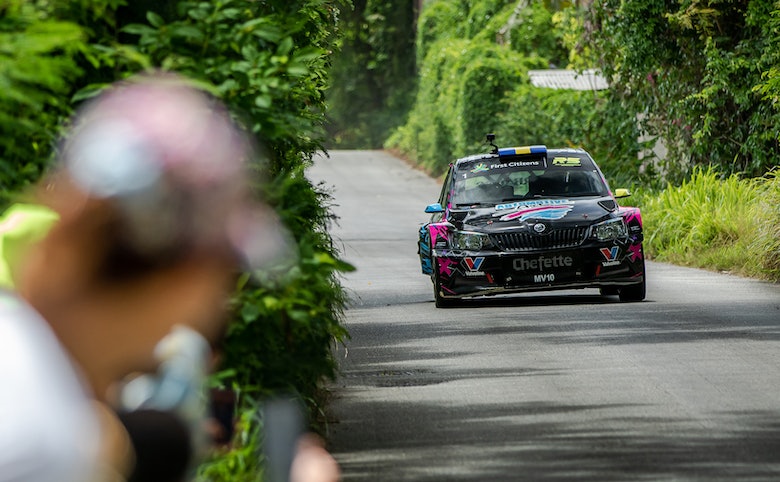 The F3 star that shone in Barbados

“I had a look at the points tallies and of course [he still leads but] it’s completely tightened up as a result and blown the championship wide open again with events still to come.”

It’s clearly a positive for Barbados motorsport. As Paul Horton, who drove a Fiesta R5 to 11th overall last weekend with three-time British Rally champion Matt Edwards alongside him, described it to DirtFish: “It gives everything a structure, something to fight for.”

But where will it go in the future? Barnard thinks it “already is a success” but can see scope for an even bigger geographical footprint beyond just Barbados.

“I think that, big picture scenario, it could be Caribbean-wide,” he said.

“We used to have an amazing set of Caribbean rallies – an astonishing rally in Jamaica that still exists but in the early ’90s it was a big, big deal, far bigger than our event was.

“And then Trinidad had an excellent gravel rally and of course Martinique has had a rallying history and a heritage with Simon Jean-Joseph winning the European championship and he lives there. They have amazing stages, amazing stages from a Tarmac perspective.

“So I’m not sure where the R5 championship goes, but certainly it would be an ideal platform for a Caribbean championship.”

To learn even more about Caribbean rallying and last weekend’s Rally Barbados, check out a bonus episode of SPIN, The Rally Pod in conversation with Neil Barnard.