Paddon revealed the Kona at Hyundai New Zealand HQ earlier this month and is keen for the world to see what him and his team have been working on for the last 18 months.

“The car itself is still pretty raw, but we don’t want to keep hiding it away,” Paddon told DirtFish.

“It’s a good time to bring it to the event and just do some demonstration runs in it. It won’t be anything like it’s full potential, but it’ll give people an idea of what we’re doing.”

The Paddon Rallysport team is working on developing the car’s gearbox and torque maps at the moment – both of which limit the car’s performance.

“We’re probably got around 75% of the performance,” said Paddon. “The gearbox is limiting the speed a little bit, but like I say, it’ll be enough. We’ve been really busy working on all of this and that hasn’t changed.

“At the moment we’re working with a small battery in the car, but that’s another focus for us – we have to make sure we get the range [out of the battery]. Battery technology is something that’s evolving all the time and not just for our rally car.” 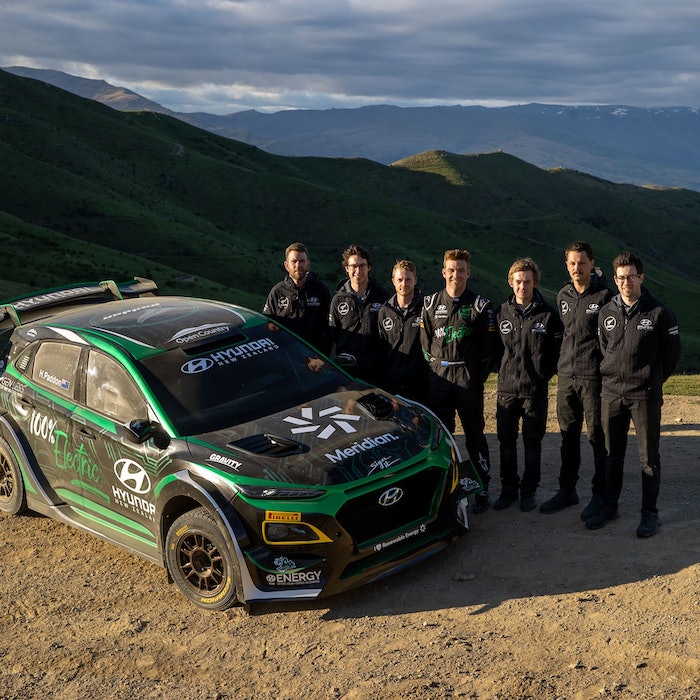 HOW PADDON’S SEVEN-MAN ARMY IS UPSTAGING THE WRC

THE KONA PROJECT COULD BE DOING WRC DISTANCES BY 2021

Asked if there was a target event for the car’s competitive debut, Paddon replied: “It’s too early to say what the target event is – we’re just looking to knock it out of the park before the end of next year.”

Sunday’s Repco Battle of Jacks Ridge is televised competition at a purpose-built 1.2-mile stage in the Auckland suburbs.

The venue will be used for the final two stages on Saturday’s City of Auckland Rally before Sunday’s day-long, shootout-style event. As well as demonstrating the Kona EV, Paddon will drive his i20 AP4++. His team will convert the car from the AP4+ specification it competes in on Saturday.

“I’m looking forward to the weekend,” said Paddon. “It’ll be good to get back out on the roads and do some skids. The events are really well organized and really popular – all the tickets are sold out and there’s a real buzz about the place for the rally.”

Saturday’s City of Auckland Rally utilizes a day of what would have been New Zealand’s World Rally Championship round this year, with the Jacks Ridge venue built by former NZ rally champion Andrew Hawkeswood specifically as a WRC-spec superspecial test. The stage offers close competition with the iconic Auckland cityscape and Hauraki Gulf as the backdrop.