Plonk Hayden Paddon in a Hyundai anywhere in the Asia-Pacific, and more often than not he’ll end that weekend with a win.

New Zealand is naturally Paddon’s most prolific hunting ground, but Paddon has strong form over ‘The Ditch’ in Australia too – particularly on the Coffs Coast.

“It’s where we won the Production World championship in 2011 and it was obviously where we had our last event in a World Rally Car, not that we knew it at the time,” he says.

“So there’s a lot of good memories over there, it’s always been a nice rally, nice atmosphere.”

And last weekend’s Coffs Coast Rally was no different. On the face of it, it was another beautifully controlled rally from a driver who’s gone undefeated in every championship he’s contested outside the World Rally Championship in 2022.

The four-minute winning margin over Lewis Bates’ Toyota, despite a brief turbo pipe problem and just three-wheel-drive for the first afternoon, acts as yet more evidence.

But, there was something very different about last weekend – and not just the fact Paddon clinched the FIA Asia-Pacific Rally Championship title for the first time.

To win it, he just needed to win the rally. The other scoring rounds he’d done (Otago Rally and Rally of Whangarei) were, essentially, irrelevant.

They’d served their purpose in allowing Paddon to contest the ‘final’ in Australia, but that’s all. The result on Coffs Coast Rally was, bizarrely, all that influenced the championship season.

“Generally you prefer championships to be over a duration of time, that gives you a bit of room for error if need be, but they’re trying to resurrect the APRC.

“The APRC’s not a cheap championship because each round has been in a different country in the past and that’s effectively air freighting or sea freighting your car and team from rally to rally.

“The trying to do it over one round thing is obviously just trying to make it a bit more financially achievable but there was a lot of pressure on to be honest.

“It wasn’t about going all-out, it was about going at the necessary speed to win because you also couldn’t afford to not finish. So it was a real balancing act.”

Winning a championship by simply winning a rally is certainly quite quirky and unorthodox, and Paddon’s not necessarily a fan. But he’s equally appreciative of the need to do it.

“I don’t like the one-round shootout thing,” he says, “but I can understand that they are trying to be proactive and trying to find a solution.

“The APRC needs to be resurrected because there’s a huge amount of history in that championship. Possum Bourne, Kenneth Eriksson, Richard Burns [sic Burns was second in 1996] – all these guys have all won APRC.

“It’s always been a very prominent championship in this part of the world and to be honest a solution needs to be found because at the moment for any drivers anywhere in Asia-Pacific essentially, but particularly in New Zealand and Australia, there’s no intermediate step to go to Europe. 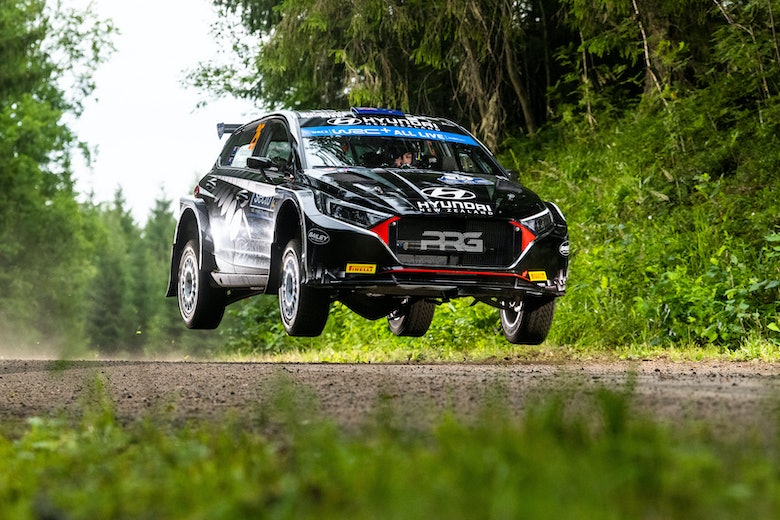 HOW LOYALTY HAS GIVEN PADDON ANOTHER CRACK AT THE WRC

“And that’s the biggest problem when you consider any young drivers or anyone wanting to get to Europe, there’s nothing in between. So that’s where the Asia Pacific fills that gap but trying to find a way to make that financially viable for teams is the biggest challenge.”

Paddon, however, has a solution.

“We still need an FIA championship down in this part of the world,” he explains.

“I think, and I’ve always pushed for a solution to that in a Trans-Tasman championship. Between New Zealand and Australia there’s a lot of good teams, a lot of good rallying.

“A Trans-Tasman FIA championship, two or three rounds in each country, work in commercial partners to get the shipping and logistics sorted and then it’s something that could be viable with quite a number of competitors.”

That’s looking ahead, but what about the here and now?

Paddon’s not a particularly emotional character that tends to reflect on any of his achievements. But despite the abnormal structure to the season, this APRC title means a great deal to him as he became the first Kiwi to win it since 2000 when Paddon’s hero Possum Bourne lifted the trophy.

It's probably our most winningest year for sure Hayden Paddon

“100%, that was what the target was. For us it was quite a financial commitment to send the team and the car and everything across the ditch for a one-rally shootout and we did that because the championship means a lot to us.

“Possum on there, there’s a lot of history and to have our name alongside all of those, no matter how the championship was structured, at the end of the day your name’s on the same trophy and that’s something I’m quite proud of for our whole team.”

In fact, the entire 2022 season has been a source of pride with yet another New Zealand title, the Tour European Rally championship title and a return to the WRC to complement this APRC success.

“Yeah, it’s probably our most winningest year for sure,” Paddon says.

“I think we’ve won 10 out of the 13 events we’ve done so it’s been quite successful in that respect.

“Yeah, obviously you love competing in New Zealand but being stuck here for the last few years with COVID, it’s been nice to just branch out again and be, I guess, amongst different competition, different conditions, different rallies and how it just starts pushing you again.

“I’ve really enjoyed this year and hopefully we can build on this for next year and have equally as successful and as big a season.”

WRC manufacturers with the most wins per season