“That’s not good! Oh they’re going to be really pissed off!” – talk about an understatement… You see, rally cars have four wheels for a reason, and it’s usually a good idea to keep them all on the ground.

At this year’s Goodwood Festival of Speed, I was lucky enough to ride shotgun with six-time US rally champion Travis Pastrana.

He had a busy weekend planned at the Festival, with runs on the world-famous hillclimb in the Gymkhana-ready ‘Family Huckster’ and on the Forest Rally Stage in a championship-winning Open Class American Rally Association car. After meeting up with me on Friday morning, his weekend suddenly became less busy. 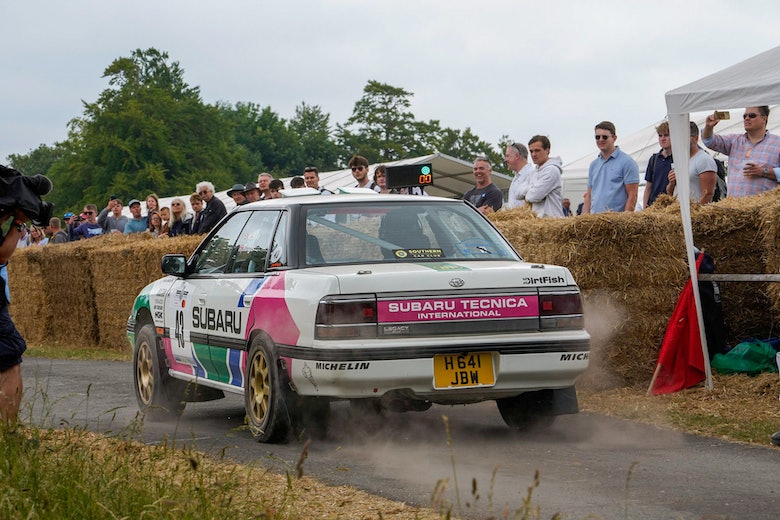 WHY DIRTFISH JUST HAD TO BE AT GOODWOOD

Goodwood’s rally stage, designed by the late, great Hannu Mikkola, has undergone something of a transformation since I last rode on it (in 2019 with Oliver Solberg in the same breed of WRX STI). This time the 1.7-mile course was being run in reverse.

Drivers on the ground seemed to be enjoying the change, although I, a mere mortal in the passenger seat, found it equally as mental as before, and the jump perhaps a little bit more dramatic.

But what do I actually know? I always say there’s a good reason why I write about cars for a living rather than drive them.

At 11:30 on the Friday of the event, Pastrana was heading out onto the stage – on just his second run – for a test before the rest of Subaru’s invited guests from the media and the company itself arrived.

I, being uncharacteristically early for once, quickly got ushered into the empty passenger seat, and we joined the line to get onto the course.

A little clarification at this point is perhaps needed, given what you’re about to read a little further down. This, while timed and run like a genuine special stage, is very much a demonstration.

The co-drivers aren’t expected to deliver pacenotes, although I might brush up on mine for my next ride-along given what was about to transpire.

Shooting off from the top of the hill, the first stanza of the stage is almost street circuit-like, with hay bales lining the course, leaving very little room for error. Their close proximity only amplifies the crazy speeds these sorts of cars can do on all sorts of less-than-perfect surfaces. Upon entering the forest itself, there’s a quick right-left-right sequence before you can really open up the taps and fly the car – literally – down the stage’s most wide open section.

Hard on the brakes, we’re into another twisty sequence next with neither the car nor the driver flinching. The passenger wasn’t either, but then again, I would say that, wouldn’t I?

That wouldn’t last much longer though, as barely a minute into our run, things took a turn – or a tumble.

Just before that, a little tickle of the handbrake had Pastrana beautifully sliding the car into the first of two tight left-handers. The same should’ve happened moments later too, only this time we ran a little tighter.

The car went up the bank on the inside, and the world went into slow motion. For what seemed like three years, the car was rolling. The reality, as it turned out, was actually a mere three seconds from ‘takeoff’ to ‘landing’. 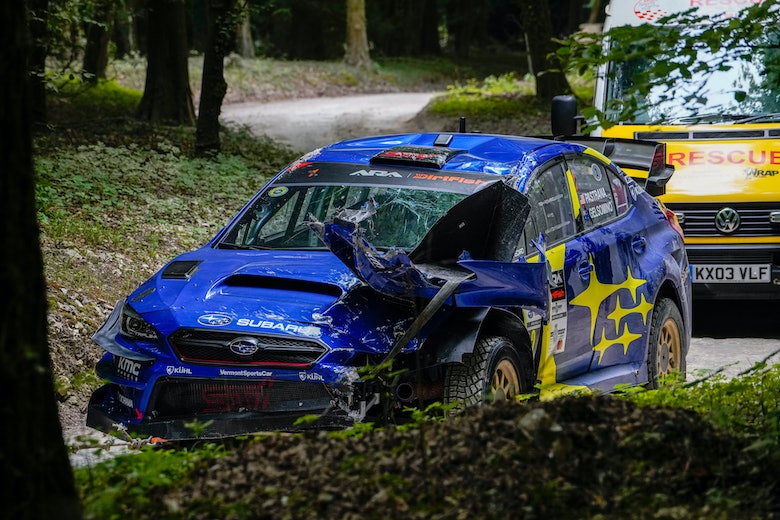 Here’s where my view of rally drivers changed. Again.

Why? Well, besides the insane concentration levels needed to handle a competition-ready 330bhp monster on a loose surface, tree-lined road at mad speeds, as we waited for assistance from the marshals (and while sitting in a ‘less than ideal’ position), Pastrana was calmly cracking jokes.

At the time I thought I was just as composed as he was – watching back the footage though, apparently I wasn’t (as my embarrassingly squeaky voice suggests).

When I ran with Solberg a few years ago, my view of rally drivers switched from “they’re insanely talented” to “they’re superhuman”. Now I’m more in the “they’re a different, otherworldly breed altogether” camp. The same can be said of ‘real’ co-drivers who, unlike me, aren’t looking out the window, but doing actual, crucial work.

Once we eventually landed sunny side up, without hesitation, Pastrana fired up the car and kept going – at speed again, and chucking in a few donuts for the crowd too. The car was bent, but drivable and he, at least on the outside, was completely unfazed. Meanwhile, this guy in the passenger seat was still confused, laughing nervously, and still processing what had just happened.

Sadly we never made it to the end of the stage. We could have. The car was fine(ish), and had this been a round of the ARA championship with points on the line, we most definitely would have.

But this being more of a show, we had to stop so we could get the all-clear from the medics. We were fine but appreciated the need to be looked over.

However, the car was less grateful. The roll and subsequent stoppage led to it overheating and us needing a tow back to the top.

In about three and a half minutes, I got a whistle-stop tour of the life of a top rallying star. We blasted through a forest at unimaginable speeds, were involved in a dramatic crash, bounced back and continued without a care, then arrived back in the service park to a small crowd of smiling faces. To put it mildly, it was quite an experience.

What else is certain is that Rhianon Gelsomino can keep her job. This co-driver might not be all that useful.