Ogier picked up severe cosmetic damage down the right-hand side of his car during a collision with another car on the road section before Sunday’s opener.

His right-hand side door was taped up but slightly ajar, meaning his co-driver Julien Ingrassia had to wear goggles to combat the wind coming into the car. 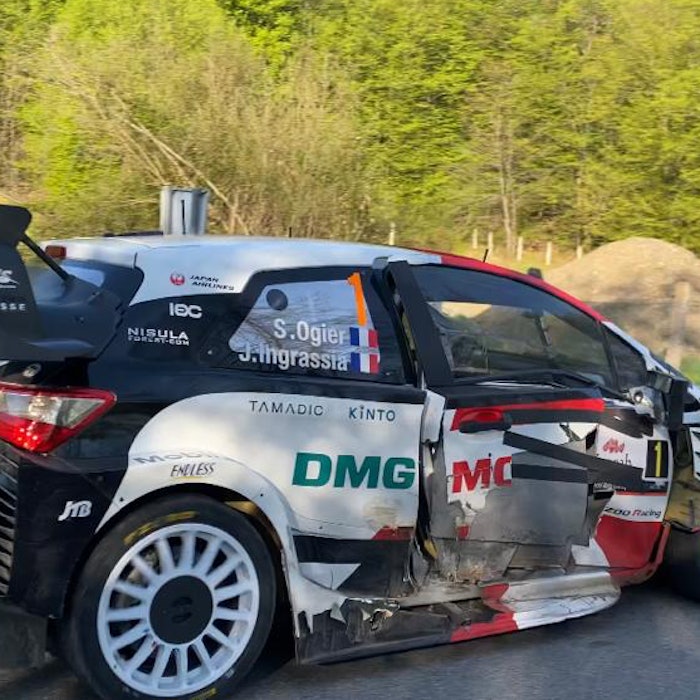 Our full report from SS17, as it emerged Ogier was carrying significant damage

This allowed Evans to turn a 4.2s deficit into a 2.8s leading advantage.

“It’s been a tricky morning,” said Ogier at the end of the stage.

With no service break on Sunday, Ogier will have to compete on the final two stages of the rally without major repairs to his damaged Yaris.

Thierry Neuville couldn’t match the pace of Evans, but he was still 3.5s quicker than Ogier to close the gap to second place to 5.6s.

Ott Tänak set the sixth-fastest time but has an increasingly comfortable gap behind his fourth place overall, after several issues for the drivers behind him.

Adrien Fourmaux made his first significant mistake of the weekend as he lodged his Ford Fiesta WRC in the banking on a narrow right-hander.

Spectators helped to free his Fiesta and limited Fourmaux’s time loss to a single minute, ensuring he remains in fifth place overall.

“We caught the tire, the hard [tires] were quite cold, [I was] not careful enough in the corner,” Fourmaux explained. “The car just slid out of the road. But we’re still here, that’s the most important thing.”

His M-Sport team-mate Gus Greensmith also hit trouble with a stage time 40.4s slower than Evans’s benchmark due to a loss of hydraulic pressure aboard his Fiesta.

Hyundai’s Craig Breen enjoyed one of his most competitive stages of the weekend with the fourth-fastest time. He is 52.3s off Greensmith, who dropped a minute over the first two stages of Sunday morning.

Teemu Suninen set a stunning stage time in WRC2, just 2.1s slower than Tänak’s World Rally Car effort. The class leader and defending series champion Mads Østberg has a 49s lead over Suninen but is still struggling with a brake issue aboard his Citroën C3 Rally2.

Enrico Brazzoli was running fifth in WRC2 before the Italian damaged the front-left of his Škoda Fabia Rally2 evo and limped to the end of the stage.

With Brazzoli likely to retire, this should promote former factory WRC driver Andreas Mikkelsen into fifth place in the class.

Mikkelsen (pictured above) is over 40 minutes adrift of Østberg and is targeting the stage win when this test is repeated as the powerstage later on Sunday. He was quickest of all the Rally 2 runners on the first pass and sixth overall.