Eight World Rally Championship events into life behind the wheel of a Toyota Yaris WRC, Elfyn Evans had stood on top of the podium twice.

Eight WRC events into life behind the wheel of a Toyota GR Yaris Rally1, Evans has yet to stand the tallest.

Maybe. Copying and pasting one statistic in isolation without considering any of the context isn’t an exact science, but it’s certainly true that Evans hasn’t quite gelled with his new office like he did his older one.

Evans said so himself.

“It’s not been as smooth to be honest as with the previous car, no,” he told DirtFish.

“I would tend to agree that it’s not been quite the same feeling from the car, I just haven’t really gained the same level of confidence but I think it’s to be expected to a point with a new car, but yeah it’s not come quite as easy.”

Last weekend’s Rally Finland was the obvious comparison point. While Evans grabbed hold of the event on Saturday last year to storm to a superbly accomplished victory, he went backwards this year and couldn’t live with his two team-mates Kalle Rovanperä and Esapekka Lappi.

A lot of that was down to setup, which all three works Toyota drivers struggled to optimize across the weekend and Evans aced in 2021, but things just haven’t clicked in the Rally1 the way they did for Evans in the Yaris WRC.

Remember that epic performance on the Monte, where he led the rally and challenged eventual victor Thierry Neuville and Sébastien Ogier all the way? And then of course the win next time out in Sweden.

When Evans is fully at one, that’s when we see the best of him. So clearly, something isn’t quite clicking for him at the moment.

“We just didn’t fully settle in to be honest the whole weekend, just felt not fully, fully fully at one with the car to be honest,” Evans said of his Rally Finland performance, where he finished fourth but was heavily compromised by a broken damper late on Saturday.

“The car is obviously good but just didn’t work for me in the same way that it has done in the past, and even compared to Estonia to be honest the feeling was not quite as positive. 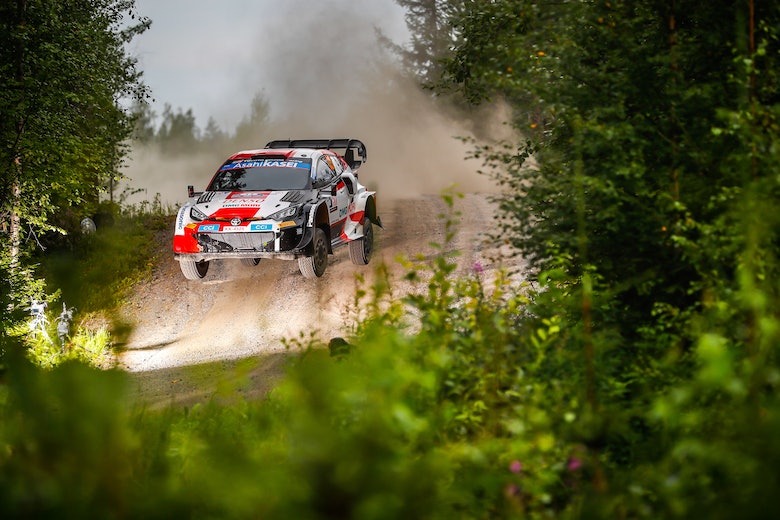 BEHIND TOYOTA’S PRAGMATISM OVER PRIDE APPROACH TO FINLAND

“Yeah it’s been a tough weekend, a frustrating one, especially to lose ground on Saturday afternoon with the issue but it’s like that, you know.”

The burning question is what can Evans do to turn the tide? The world title is a lost dream for 2022, but there’s still plenty for Evans to achieve this season – not least finding that last 1 or 2% to fully get on top of the car.

But Evans was clear that his performance level this year hasn’t been poor, it’s just not quite been where he wanted it to be.

“I don’t think it’s a million miles, like there’s no rally where we’ve been desperately slow,” he pointed out.

“Most rallies we’ve managed to win some stages at least and be in the fight at most of the events but we’ve just missed that last like 1 or 2%, which is frustrating, obviously.

“But I think that’s the bit we just need to find, that last bit of feeling and connection with the car.

“I think that’s the bit really.”