Ott Tänak continued to show what might have been on Saturday afternoon of Rally Estonia, continuing his stage-winning form from the morning that, ultimately, means little following his triple puncture on Friday.

The first pass of the Peipsiääre stage was the one on which Kalle Rovanperä obliterated his World Rally Championship opposition, but the second running was a very different affair.

Deep ruts had developed on the technical stage, which regularly runs under the cover of trees, putting a premium on grip.

Hyundai’s Craig Breen outlined the challenge: “That was one of those stages where you just wish you had splits [available in the car], it felt like I was stopped!

“I tried not to make mistakes but it’s so, so easy, the ruts take you off-line everywhere, so I was very pleased with that.”

Breen was third fastest on SS14, mirroring his stage position from the morning, but his time loss of 3.8 seconds to rally leader Rovanperä was far less severe than earlier. 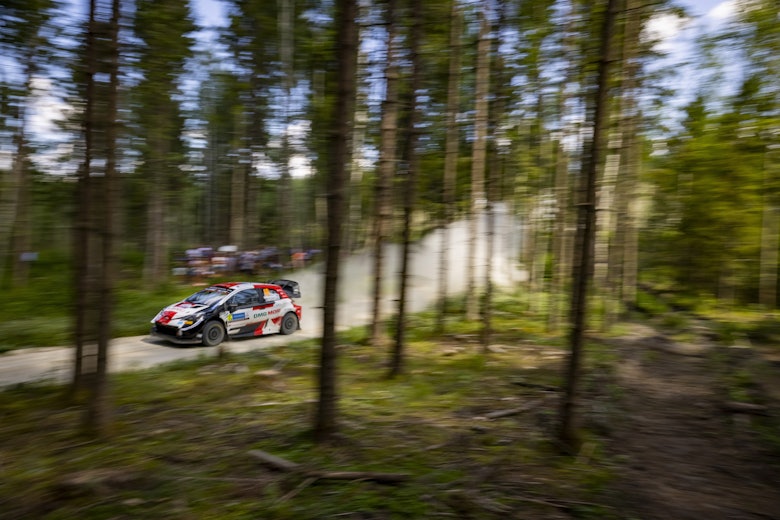 How Rovanperä 'blew the doors off' Breen

“Too rough! It’s not nice in the car, you have to be so careful,” he said.

“Even though I didn’t push hard there were so many big hits to the tire and the car. You cannot enjoy it, that’s for sure.”

Tänak looked to have enjoyed the stage as he set a punchy stage time, 7.5s stronger than Rovanperä’s effort.

Elfyn Evans has struggled to find the right feeling throughout the Rally Estonia weekend, but the first stage after Saturday service was an encouraging one.

Evans took 5.1s from team-mate Sébastien Ogier, although perhaps that was more due to Ogier looking a touch rattled.

At the stage end, Ogier clambered out of his Toyota and examined his Pirelli tires before speaking to the stage-end reporter.

“I didn’t push at all in this stage, I just went through,” he commented.

Evans countered: “[It’s] very difficult to know how to drive in there, the ruts are very, very deep.”

Thierry Neuville also lost 0.2s to Evans on the rutted SS14, but he managed to beat Ogier by 4.9s to increase his advantage to 9.4s in the fight for third overall.

“I had a nice and clean run,” said Neuville. “I changed the settings a bit so it took me a while to get used to the car, but in the end it worked quite well.”

Gus Greensmith, out of contention following a mechanical retirement on Friday, was frustrated at the end of SS14 as the steering wheel on his Fiesta WRC looked to be out of line.

That has an effect on the car’s differential, which in turn made Greensmith’s car unpredictable and unbalanced through the corners – far from ideal on such fast, rutted stages.

Teemu Suninen and Pierre-Louis Loubet are sixth and seventh, ahead of the leading Rally2 runners.

How Rovanperä ‘blew the doors off’ Breen