There’s not much to be miserable about after last week’s sensational start to the 2022 World Rally Championship season – the Monte Carlo Rally. But are we rather fortunate that that’s the case?

When Craig Breen reached the end of Val-de-Chalvagne / Entrevaux for the second time last Friday, he was far from impressed.

Breen is one of the WRC’s best for a quick soundbite at the end of a stage. From his tears upon claiming his first podium finish on Rally Finland 2016, to his jokes about “skippy” the kangaroo in Australia, or his sheer joy at driving one of these Rally1 cars, he’s infectious and always good value.

But last Friday, Breen was serious. So serious that instead of looking ahead of him at the stage times or just generally in a forward direction that indicated he wanted to get going, he turned and looked straight down the TV camera when offering his words to WRC’s stage-end reporter.

“That’s unfortunately a position lost to [Ott] Tänak but tell us about your day, sum it up for us,” came the question.

“Not so bad. To the complete – and he deserves to be called an a**hole with his tripod in the line and stood behind the camera in a very, very fast place – thanks for that, you probably dropped us two or three seconds there,” Breen said, as he gestured a sarcastic thumbs-up.

“He put it where the cars had been in front of us, where… where’s the sense in that, honestly?” he continued, raising his hands in dismay before pulling his Puma into first gear and heading off to service in Monaco.

Breen wasn't exaggerating. Not at all

I remember hearing that interview and thinking to myself, ‘No, surely not. He must be exaggerating’ before quickly switching back to filing the report for the final stage of what had been a pulsating day of rallying.

But later that evening I logged back on to WRC+ and loaded up Breen’s full onboard from the stage as I wanted to see for myself.

Breen wasn’t exaggerating. Not at all.

After negotiating a section of snaking, icy hairpins, Breen was let loose a little and attacked a ‘long three left plus’ and the next turn was an immediate switchback into a right. Paul Nagle advised Breen to ‘keep very in’ but that simply wasn’t an option as in his path was – as Breen said – a tripod with a man standing behind it.

Right on the racing line.

The screengrab above shows you just how ludicrous a move this was from the spectator. Breen was traveling at 58mph as he crests the bend and only just had time to back off and open up the steering to avoid him.

His rhythm was then clearly rattled for the next few meters as he tried to come to terms with what had just happened.

Nobody should ever expose themselves or a competing crew to this much danger on a rally stage. There is absolutely no excuse for it. Gone are the days when the crowd parts like a wave to make way for a rapidly approaching Group B car – few will need a reminder of the sad realities of that era of rallying. 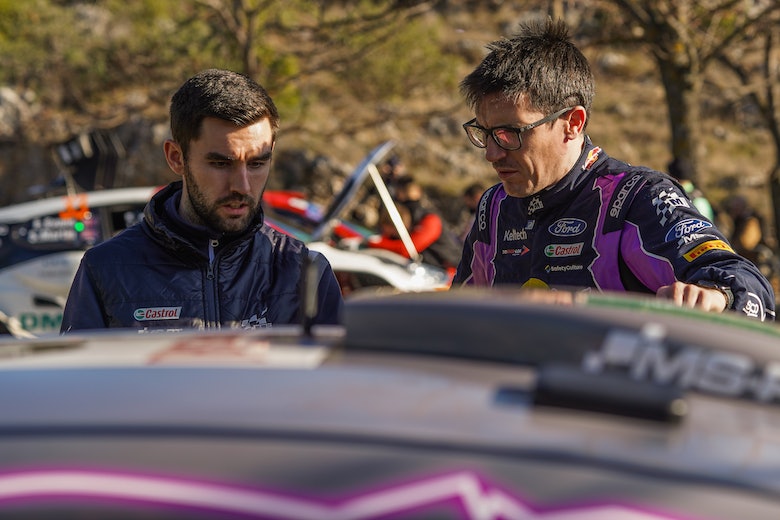 But what makes this even more strange is the fact he was standing behind a tripod that we can only assume belongs to him. When you’re recording the action, you can watch it back. Why then stand behind your own footage and run such a risk? Lives are not to be gambled with.

It simply does not make any sense. And although we cannot really make out his face, the advent of WRC+ means he has nowhere to hide.

I consulted every onboard from the Rally1 drivers (Sébastien Loeb’s wasn’t available) to try and analyze what he was up to. Takamoto Katsuta was the driver before Breen on the scene and the spectator was up to the same antics when the Toyota went past too – in fact, you can see him run from the road and into his precarious position as Katsuta approaches.

Katsuta somehow wasn’t distracted by the antics. Before Katsuta, Ott Tänak faced a similar scene – the ‘fan’ waving his arms in the air as the Hyundai passed – while Kalle Rovanperä had to contend with someone on the outside of the corner as well as the inside.

In fact, the only drivers who didn’t come across the spectator in the road were Sébastien Ogier, Thierry Neuville and Gus Greensmith – whose car was next on the road after team-mate Breen’s.

But in none of these instances would you consider the position the spectator was standing safe. He had made his way off the asphalt but he was still inexcusably close to where the cars were traveling – and need I repeat that this was on the apex of a medium-speed corner.

Standing so close to a live rally stage is a terrible idea, but doing so without any form of protection (ie a barrier or some elevation) is reckless. You can see the various screengrabs above to illustrate the point.

It really is such a crying shame because so much else about the fans on the Monte was brilliant. We’ve all seen the epic scenes from Thursday night with air horns, flares and even fireworks. It was magical.

And unlike in any other form of sport – not just motorsport – the fans have such an active role in the competition. If it wasn’t for them, none of Elfyn Evans, Oliver Solberg, or Katsuta would have made it through Saturday.

Sadly one spectator took it upon themselves to have a negative impact, costing Breen seconds and giving him a fright. He was lucky it didn’t end up being a repeat of Hayden Paddon’s situation in 2017, where a spectator lost their life on the first stage of the event.

Breen did us a massive favor by highlighting the issue. I doubt anyone would’ve batted an eyelid had he not said what he did at stage-end.

In a sense, I feel guilty for going in so hard on this one particular individual because he was the one that was caught. If this was you, or has been you at a recent event, think harder and think smarter.

The competition you love won’t be coming back to your country if you put yourself in jeopardy – just ask the Polish fans, who lost their round of the WRC after 2017 after poor and dangerous spectating decisions.

It’s the actions of the minority that so often ruin it for the majority. Don’t be like this man. Be like the rest of us. Enjoy rallying from a safe and sensible distance, and ensure you can go home to tell your friends about it.