Kalle Rovanperä leads Safari Rally Kenya ahead of the final day by over 40 seconds, but Thierry Neuville crashed out on the dramatic Sleeping Warrior stage that concluded Saturday’s leg.

Just like the previous stage, Elmenteita, had been, Sleeping Warrior wasn’t for the faint-hearted with several water-ridden sections that were either like an ice rink, boggy and tram-lined, capable of sinking a car, or both.

Ultimate caution was the required tactic meaning the fastest stage time – set by Sébastien Ogier – was over two minutes slower than Neuville’s stage-winning effort in the morning.

Almost every single Rally1 driver had some sort of drama or story to tell on the stage, but Neuville was the biggest loser as he retired from third place – having just won the position from Takamoto Katsuta on the previous stage.

Neuville had been in a race to even make the stage, working on the front suspension on his Hyundai after encountering an issue on the penultimate stage of the day.

His handiwork – as it so often has this season – once again proved fruitful but Neuville may now be left wondering why he bothered given what unfolded.

His i20 N Rally1 had stopped in a heavily washed-out, rutted section and wasn’t going anywhere, despite Neuville attempting to restart the car.

He eventually managed to get going again, but a few corners later his rally was over as he slowly aquaplaned head-first into a tree.

Despite the retirement from Saturday, Neuville has only slipped down to fifth overall in the classification due to the large gaps between crews.

Oliver Solberg was next on the scene behind Neuville and slid into his team-mate’s stranded car, making contact. But he was able to circumnavigate Neuville’s stranded i20 and is now the sole surviving Hyundai in the rally in fifth place overall. 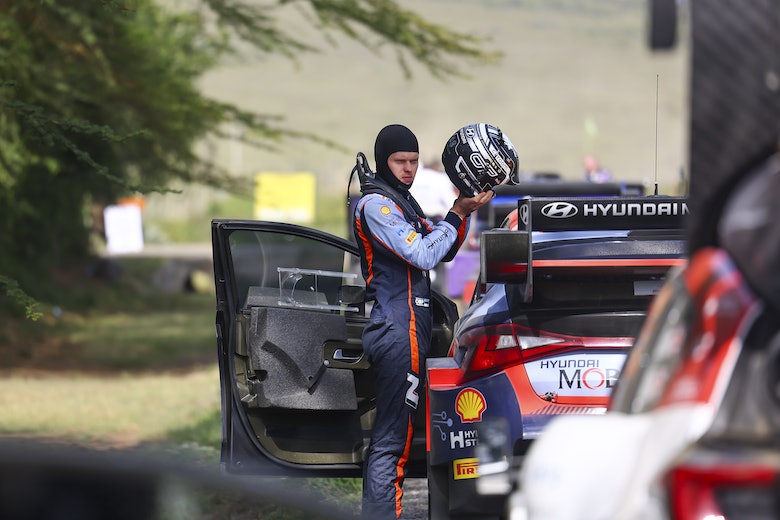 What caused Tänak to retire from Safari Rally Kenya

Solberg was loving it though, commenting that “this is proper rallying” as he lent forward, peering over the steering wheel to try and catch any view of the road ahead of him.

He was no less pumped up at stage-end: “The engine stopped twice, but it doesn’t matter I’m here!” he said.

“That’s one of the coolest things I’ve done in my life. Even if it’s hell, it’s so bloody cool. Where he [Neuville] got stuck I hit him because I couldn’t go anywhere else, what a mess. Wow!”

Sébastien Loeb was also heavily bitten, even if it didn’t cost him any positions.

The Monte Carlo winner had kept a low profile through Saturday, running as first car on the road following a small fire in his engine bay on Friday morning, but the drama had been stored for the final stage of the day.

“Middle of the stage on the straight without anything suddenly the car fell down. We had to do 15km like that,” Loeb said.

“I think it was a steering arm [that broke]. I tried to get to the finish and we are here, it’s time to finish because now it’s completely destroyed.”

Rovanperä used the tricky conditions to his advantage to once again take a massive chunk of time away from rival Elfyn Evans, besting his team-mate by 16.6s on Sleeping Warrior.

Evans didn’t have a good time of it though, sliding into a small tree that took a gouge out the drivers’ door while also struggling with visibility due to a faulty windscreen washer.

“It was awful, I can’t see a lot as we have a washer issue,” he confirmed.

“Obviously happy to be here but it was really slow because I couldn’t even see what was coming.”

Rovanperä added: “I don’t know even myself [how we made it].

“We were basically off two times just in water, we couldn’t even keep it in a straight line on the straight.

Katsuta is back up to third place thanks to Neuville’s exit, but is now over one minute adrift of the rally leader. He admitted he “backed off completely” when he saw Neuville’s Hyundai nosed in a tree.

Ogier is now up to fourth ahead of sixth-placed Solberg and Craig Breen.

“I’m trying to go with zero risk but zero risk is stopped unfortunately, it’s not very fun at all,” said Breen.

“I’d like to be going for a cut at it, there’s some nice roads and some nice stages, but not today.”

He at least made it through the stage without any issues to speak of.