M-Sport team principal Richard Millener is concerned that the damage sustained to Gus Greensmith’s car after his crash on Rally New Zealand could rule him out of Rally Spain.

Midway through the event’s tenth test, Greensmith crashed his Puma Rally1 car after understeering wide on a left-handed bend.

The car slid into a ditch on the outside and sent Greensmith into a roll, causing considerable damage to the car, and while the crew were OK, the stage had to be canceled due to the precarious placement of the car on the road.

Speaking immediately after the incident, Millener voiced his concerns that the damage sustained could be significant enough that it could prevent Greensmith from competing in Spain in three weeks’ time. 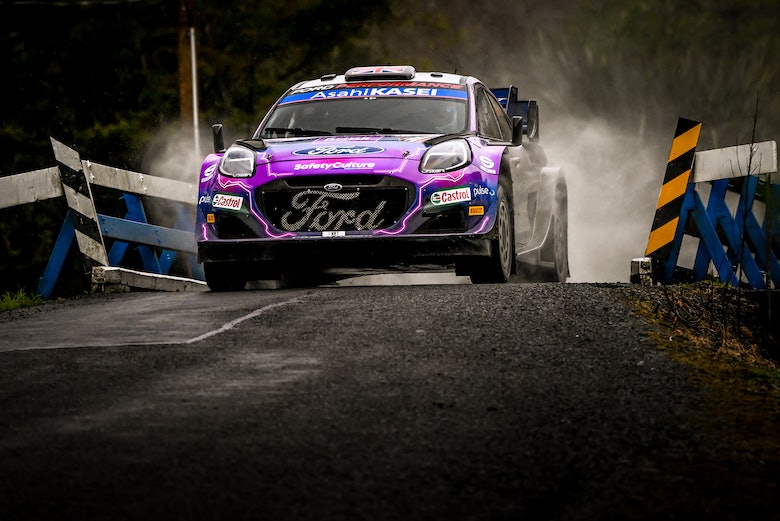 Greensmith has huge crash on SS10

“Yeah, it looks like huge damage. Just goes to show the margins we’re on,” Millener said.

“But personally, from what I’ve seen so far, he cuts in too early on the corner, carries too much speed, understeers off into the bank and then you have a massive roll.

“You can see, he cuts in a bit early, kind of tries to put a bit more lock on that, but just too fast, and off the line, on to the loose and hits the bank.

“High speed into the bank and you just get this catastrophic damage like that.

“So I have no idea what the car’s like, but that could be a tough one for Spain.”

The crash comes as a huge blow to M-Sport which has had yet another incident-filled event.

The rally started out well with Greensmith claiming his second ever World Rally Championship stage victory on SS2, but later on Friday Craig Breen retired after crashing his car on SS5.

And with Greensmith’s crash now adding to the mix, Millener admitted that the experience is difficult to take.

“It’s a very difficult time for everybody,” he said. “We try to remain as positive as we can.

“I think the positive is the car’s good, but we need a… we’re not delivering on the other aspects at the moment and you know.

“I can understand what the drivers are wanting to do. They want to show pace and they want to succeed as well. But unfortunately it’s difficult for us when we get these results.

“You know, come to the other side of the world to what is an iconic event and a great event, a great start from Gus yesterday and yeah, unfortunately that error has cost a lot for himself.

“And yeah, we’ll do what we can but it is frustrating and I can’t imagine that we’ll see that car restarting.

“[Gus] knows he’s got to push to try and improve his improvements and things. I don’t have anything against that, but it’s just the big accidents that hurt us the most and yeah, we’ve had a few this year.

“So it’s very, very difficult for us when we have this kind of thing, to get everything prepared and back again and get going again for the next event because these kinds of accidents are very expensive.”

Should Greensmith’s car not be repaired in time for Rally Spain, it would be the second time this season that’s happened following Adrien Fourmaux’s absence from Acropolis Rally Greece after his Ypres Rally Belgium crash.