Martin co-drove Elfyn Evans to victory on the recent Rally Sweden in a Toyota Yaris, which was Martin’s first WRC victory. With it he became the 15th British co-driver to win at WRC level.

And ‘Beef’ worked closely with Martin, supporting him as he rose through the ranks and headed towards a co-driving career on the biggest stage. The popular ‘Beef’ was killed in a Rally GB crash in 2005 co-driving Markko Märtin. The pair won five WRC rallies together.

“I’ve thought about ‘Beef’ a lot of times,” Scott told DirtFish. “For many years, when I’ve been on the podium and when there’s been some good moments, I think back to the help he gave me – he’s always been right there in my mind.

“I remember his and Markko’s first win [on the Acropolis Rally] in 2003 and then when they won in Finland later that year – I was working on their car on that event. He was amazing with me, helped me so much and I have a lot to be thankful to him for.

“I’ve got to be honest, losing ‘Beef’ hit me really hard,” Martin continued. “Earlier in that same year Matthew [Wilson] and I had a big accident in Wales [Rally of Wales] and I nearly stopped co-driving. He encouraged me to carry on and worked a lot with me then.

“It’s the same with a few guys. I had a text from Robert [Reid] as well, these are all guys who influenced the start of my career so much.” 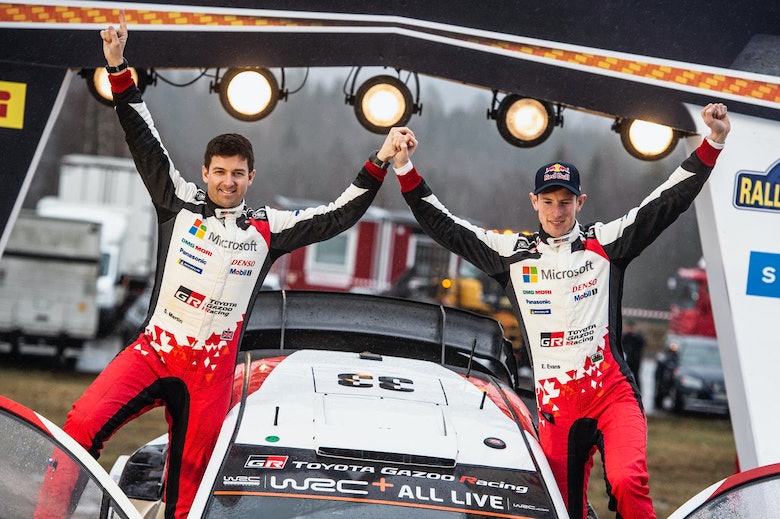 Prior to his victory co-driving Evans in Sweden, Martin’s best result was a second place on the same event two years earlier, then co-driving Craig Breen.

And Martin and Evans have a 100% podium record on the two rounds since their move to Toyota for this season, with their Swedish win backing up third place in the Monte season-opener.

So far this year, only Thierry Neuville has won more stages than Evans and Martin – 10 compared to nine for the Brits – but nobody comes close in terms of stages led. The Yaris WRC duo have been out front for 17 stages so far this year; Hyundai man Neuville is next up with five.

“There was so much time to think about things,” Martin noted. “All I wanted to do on Sunday morning was get out there and get on with it. That final stage was pretty horrible in those conditions, but it was all OK in the end.

“I must admit there were a couple of places where I had a bit of a lump in my throat reading the notes.

“When we came over the line, Elfyn asked straight away if I thought it was enough, if it was OK. I didn’t know for sure, but when I got on the radio to the team and I could hear them all cheering the background, I sort of knew!”