Ott Tänak doubled down on the strong pace he showed on the opening stage of the Monte Carlo Rally to win the second and hold a 3.3-second lead over Kalle Rovanperä after Thursday’s two tests.

Tänak stopped the clocks exactly 3s faster than Toyota’s Rovanperä on SS1, but just 0.9s separated Rovanperä and Thierry Neuville in fifth after that opening stage.

The 12.9-mile Saint-Maurice – Saint-Bonnet stage – which was delayed by 20 minutes after an accident on SS1 – was just 0.12 miles longer than the previous challenge but was a lot snowier than the first, with the route surrounded by fields of fresh, white snow.

But the outcome was similar to the first stage, with Tänak again going quickest – this time by a mere 0.3s – despite a stall off the line that the 2019 world champion estimated cost him a couple of seconds.

“Obviously my engine engineers are making me on fire!” he said. “My engine stopped twice on the start and after two seconds already we were still stopped so they made me on fire!”

Starting his second season in a WRC car, Rovanperä has had a strong opening to the Monte Carlo Rally. The 20-year-old was again second quickest on SS2, ahead of both of his more established team-mates, to maintain his hold on second position at the end of Thursday.

“It was a nice stage,” Rovanperä said. “I was surprised how well the feeling is with the pace notes and everything.

“I have to say the gravel crew is doing a good job so we just have to keep like this. Actually it was a really tricky stage but I enjoy the conditions now.”

Elfyn Evans lies 5.2s behind his team-mate and 8.5s adrift of the rally lead after two stages as he again set the third-fastest time on SS2 to complete the top-three symmetry.

It wasn’t a straightforward run for the Briton, though, as he struggled with a cold car, caused by the delay to the start of the stage.

“It was very difficult for very long into the stage actually because you have a lot of tricky icy conditions and we were sat at the start for such a long time,” he commented. 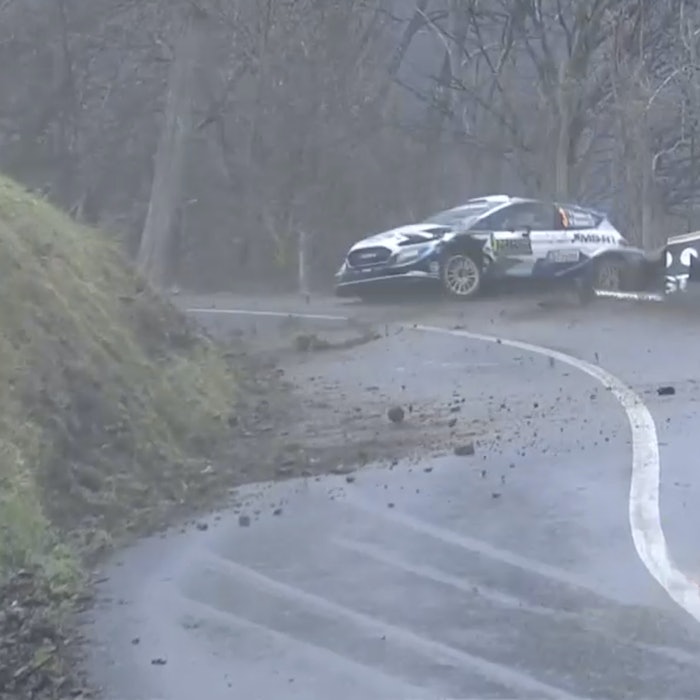 Suninen likely out of Monte with bent rollcage

Thierry Neuville and reigning World Rally Champion Sébastien Ogier drifted back slightly from the leading three, but Neuville vaulted ahead of Ogier into fourth with an SS2 time that was 1.2s faster.

Neuville didn’t look entirely happy though as he crossed the line. The 2020 Monte Carlo winner was level on pace with Tänak through the early splits but dropped 12.1s to his Hyundai team-mate come the end of the test. He elected not to speak to stage-end reporters.

Ogier meanwhile adopted a conservative approach after struggling with braking feel on the opening test. He lost 13.3s Tänak to trail by 16.9s.

“I was quite cautious again in this stage,” Ogier confessed. “It’s been a cautious start for us but we are there so we try to do better tomorrow.”

Behind the leading quartet, sixth-placed Dani Sordo has continued to struggle. He shipped 23.9s to his rally leading team-mate to lie 42.7s behind overall, and reckoned there was a differential problem with his Hyundai that is hampering him.

“There’s something strange, a noise in the car from the differential,” he explained. “The noise is like something like I never hear before.

“This stage I was maybe not doing very well but the strange before I was feeling good, so there’s something there.”

Behind Sordo is Hyundai junior Pierre-Louis Loubet (pictured above), who climbed three spots to seventh on SS2. Loubet was setting blistering pace before fading away to the sixth-fastest time, but that was explained by his choice of winter tires.

“The tire it was much better at the beginning of the stage, at the end I think the soft tires was better. But it’s OK compared to the first stage we can be happy,” he said.

WRC2 leader Andreas Mikkelsen is eighth overall, 8.9s quicker than M-Sport’s Adrien Fourmaux who was just 2s slower than Sordo on the stage.

“We’ve had a good start,” admitted Mikkelsen. “Full slick tires on this one was very difficult so we had to make the tires work.”

Takamoto Katsuta is 11th and 9.4s behind Greensmith after suffering a second spin in as many stages, this time losing the rear of his Toyota Yaris WRC just meters before the flying finish.

“The feeling is OK I just need to understand how the tire is working, because obviously slick tires in this condition is the first time for me,” he said.