But on the subject of the Subaru Legacy RS, they were as one.

The Legacy was longer, wider and more cumbersome. But, at that time, the boys found it faster and noisier.

McRae loved the balance and stability of the Legacy. The longer wheelbase meant the car was less nervous and meant it preferred to be set up for corners a good way out from the apex, then balanced on throttle through the corner. 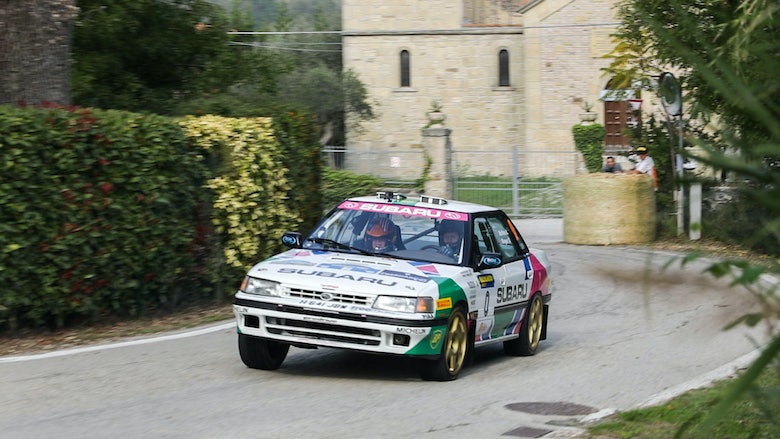 And what that throttle could deliver… with a 38mm restrictor, Group A cars were running close to 400bhp. And with driver aids still part of the ongoing evolution, the Legacy was a straightforward brute of a thing.

Getting it off the line, for example, was one of the less complicated operations. There was no ‘stage’ mode; no need to engage first, set the throttle, hold the car on the handbrake. In the Legacy, you parked it on the startline, selected first and gave it 3500rpm. When two became one and one became go, you sidestepped the clutch, gave it the gas, yanked second and held on.

It was right up McRae’s street.

But the fact that Burns won his 1993 British Rally Championship title in what he felt was the best Legacy ever made demonstrates there was more to the first fruits of the Prodrive-Subaru association. Under the guidance of pioneering engineer David Lapworth the British squad was the first to harness the potential of an active centre differential. There was finesse as well as firepower for the Legacy.

DirtFish owner Steve Rimmer’s beautiful Legacy RS is a special car for so many reasons. It’s the car McRae used to finish second on the 1992 Swedish Rally – an event which underlined the potential of both the flying Scot and that Subaru.

This was the time when Prodrive was taking a more active role in the development of the EJ20 engine, with revisions to the unit’s internal water flow combined with new pistons and some re-mapping helping deliver more power, torque and durability. Testing tolerances and the edge of the engine’s envelope, Prodrive ran it without water. It kept going.

Originally among the least powerful Group A engines, the Legacy’s flat-four motor became one of the series’ standard-bearers.

And it wasn’t just the engine that was bombproof, the car wrapped around it became one of the most capable and quick cars on all surfaces. From the Acropolis to the asphalt around Ajaccio, the Legacy RS was a potential winner.

New Zealand, 1993 was where the win finally came, however. And with that success scored, Subaru was ready to sign off on a successor waiting in the wings.

The Impreza 555 took the Subaru name to the top of the world, but the Legacy was still the start of that story. And any opportunity to watch one in action should be taken. Especially when it’s wrapped in the original, pre-555 blue and yellow, livery.

The Subaru World Rally Team mechanics might have baulked at pink jackets and yellow chinos, but the green, white and pink colour scheme worked a treat on the Legacy’s lengthy flanks.

For the Brits, there were another couple of classics: the Rothmans cars used by McRae to win back-to-back Brit titles in 1991/1992 (that livery was retained for the Legacys run by Markku Alén and Ari Vatanen on the 1991 RAC and for Vatanen and McRae on the 1992 event – Alén had jumped ship to Toyota by then) and the Elonex cars for Burns and Alister McRae in 1993.

Burns’ 1993 British title completed the hat-trick for Prodrive Subaru and sealed the Legacy’s… legacy for the English side of the Anglo-Japanese alliance.

What rallying can expect from ‘motorsport’s Olympics’