For 364 days of the year, the T-224 exiting Santa Coloma de Queralt is a fairly uneventful place to be.

It’s a nice place for a walk along the banks of the El Gaià river, but it’s a place quite industrial in nature with a fire station and waste recycling center as its main amenities. It’s not what you would call one of Catalunya’s most spectacular locations.

But October 22 was different. As the sun broke out over a chilly morning, the second day of World Rally Championship action in Spain was about to begin. And the T-224 was absolutely the place to be. 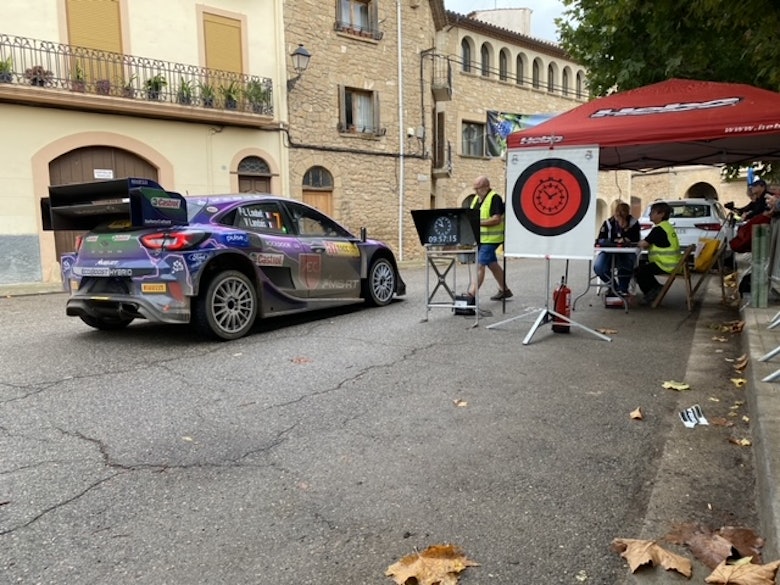 THE SPANISH VILLAGE THAT CAME ALIVE WHEN THE WRC ARRIVED

It may seem a bit bonkers for me to suggest that an unassuming spot, a mile or so out from the start of a stage, is a premium spectating location on a rally. Certainly, you’d get a bigger kick out of watching a Rally1 car blast through a fast and flowing section or negotiate a tricky couple of switchbacks.

But I’m a rally nerd. I live and breathe this discipline; I likely always will. So it’s the stuff you don’t see, the clips you can’t find on YouTube (aside from on DirtFish of course) or on WRC+, that really intrigue me. The stuff that drivers and co-drivers get up to when they’re not pushing themselves to the limit.

For rally after rally I’ve watched in wonderment at home as Colin Clark has mingled with the WRC’s finest as they get themselves – and their cars – ready for battle. It’s just one of the many fantastic things that makes rallying so unique.

And the best thing about this is, anybody can do it. Working for DirtFish grants us plenty of privileges including access to drivers and teams, but this is no cordoned-off area. This is a public road. It’s fair game. And on Rally Spain, I got to see it for myself.

Jourdan Serderidis was already there by the time the DirtFish hire car pulled up. A crowd was forming, the town had come alive.

Even at road speeds, Rally1 cars are sensational. The bark of the upshift, squeal of the brakes and then the rumble at tickover were likely an unwelcome wake-up call for the locals, but Adrien Fourmaux wasn’t worried. He parked up next to his fellow Puma Rally1 and set about readying himself for action.

A few yards further on lay Pierre-Louis Loubet. Awestruck, the crowd on the sidewalk next to his chosen lay-by was growing at pace as fans sought to catch a glimpse of a Rally1 car up close. But the serenity of the scene was sharply interrupted as Serderidis blasted past and off into the distance, warming the car ahead of SS9 Savallà.

It was truly fascinating to see first-hand what each driver does, and how their routine differs from one another. Takamoto Katsuta is as friendly as they come, but he was in no mood to be social as he fixated himself on his pacenotes, trying to absorb as much information as he could before he tackled the stage.

You’ll find Elfyn Evans similarly in the zone. Ignoring everything else around him, co-driver Scott Martin pulls the blanking off the Toyota’s radiator as Evans busies himself cleaning his windshield – methodically, purposefully. You sense that like a lucky pair of underpants, without this ritual Evans would feel a touch uneasy.

Gus Greensmith meanwhile provides the stunning juxtaposition that the WRC offers. All suited and booted and nearly ready for action in his hunkered-down Ford Puma, it’s a small dog that catches his eye. Professional athlete, mixing it in the real world, and there’s no pretense. Greensmith kneels down and shows the dog his affection.

Even when discussing the real job at hand with DirtFish, Greensmith’s mind is still on his new furry friend: “My morning’s been made by this absolute G,” he smiles, glancing over his shoulder.

#WRC or dogs – we’re not quite sure which @GreensmithGus loves more 🐶 pic.twitter.com/TAsoIKXZ9f

As cute as the dog was though, it’s not what the people have come to see. Up the road outside the fire station, the wave of people crowding round suggests that Dani Sordo has arrived. And he has – not that you could see him, even with the Hyundai’s distinctive and bright paint job.

Cándido Carrera is out, checking the tire pressures, but his driver is still strapped in the car – glued to his phone as he gleans any intel he can from his own recce video. DirtFish tempts him out of the car for a word, and immediately his adoring fans swarm to Sordo’s side of the car for a snapshot of their hero.

But suddenly, they’re conflicted. Kalle Rovanperä’s Yaris appears into view, capturing the attention of the crowd. The world champion pulls up at the recycling center, looking for his own, secluded area to prepare. It was a tactic mimicked by Ott Tänak, who had sidled in almost unnoticed until DirtFish walked over to him.

Typically, Tänak’s as steely as ever. Doggedly determined and fiercely focused, he’s a man of few words in the morning – warming up his body and absorbing all that he can from the WRC’s All Live stream with the early runners already well onto the stage. And Martin Järveoja’s similarly driven, reviewing the amendments the route note crew have made to the pacenotes and adding in those changes.

We leave Tänak alone, and soldier up the road to observe Rovanperä. Some of Sordo’s crowd have migrated over, but it’s still a remarkably peaceful scene considering the buzz he’s about to create in the next 10 minutes. It’s amazing to witness each driver’s character really shine in how they conduct themselves ahead of the stage. Rovanperä? He’s unfazed – a picture of assurance and confidence.

But ever the mental mastermind, if there’s anyone that can push his buttons it’s Friday’s overnight leader Sébastien Ogier.

Driving out of Santa Coloma de Queralt, Ogier had his choice of preparation spots. But he was hunting the #69 Yaris, and duly pulled up right alongside Rovanperä. The psychological warfare had begun. Rovanperä glanced up, scratched his head and returned his gaze to his cellphone.

Benjamin Veillas gets out of the car almost immediately, but Ogier keeps himself out of sight. The first we see of him is signing a young boy’s pants, but soon he turns to face his rival. Clark is the middleman, interviewing Ogier as he and Rovanperä lock eyes. It’s a truly special thing to witness as the first battle lines are drawn.

Next time you’re following a WRC event, do yourself a favor and experience it for yourself. Find the road book online and follow the route to the start of the day’s first stage.

Sport isn’t just about action, it’s about characters. And there’s no better way to learn them than standing outside a recycling center on the T-224.