As the days passed in the run up to Rally Sweden, the clearer it became: the event was history. Financial ruin and World Rally Championship calendar oblivion awaited.

Yeah, didn’t quite work out that way, did it?

Instead, Glenn Olsson and his magnificent team crafted round two from nothing and delivered a stage worthy of the history-making event Rally Sweden developed into.

Elfyn Evans became the first British driver ever to win in the once-frozen north, while his Toyota team-mate Kalle Rovanperä almost reduced their boss Tommi Mäkinen to tears by becoming the youngest ever WRC podium-dweller at the age of just 19.

Welcome to DirtFish’s long read, part of our #DirtFishMonday package to help you offset the post-WRC blues a day or two longer.

I’ve got to be honest, I really can’t think of a better way to get this feature series started.

Evans’ pace at the season-opener in Monte Carlo last month surprised a few. But not me. The Welshman is blessed with a natural flair for finding grip on the slipperiest of asphalt roads.

But Sweden? That was a bit more complicated. Yes, he’d been impressively quick – and uncatchable – through Hof-Finnskog, Röjden and Likenäs in 2019, but nobody predicted the sort of Scando-like dominance he turned in this time. 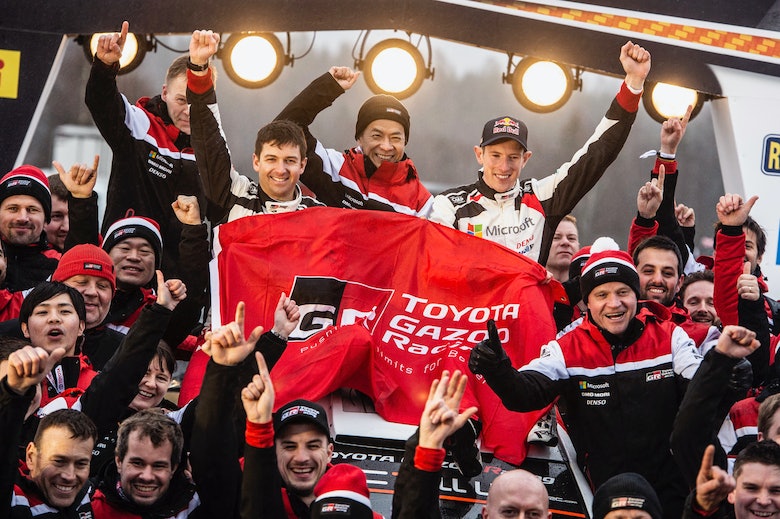 Evans and co-driver Scott Martin were never headed on an event ravaged by a warm winter and trimmed to fit the best of a bad lot of roads. When I say bad, I mean bad in the sense that they were short of the thick ice surface and white walls which have traditionally lined the route – the curves, corners and crests were just perfect.

And across those curves, corners and crests, nobody could touch Evans as he powered to the sort of success Colin McRae and Richard Burns could only dream of.

To put the performance into context, on the first seven of the event’s nine stages, the #33 Yaris was quickest on five. And second fastest on two.

Typically, Evans shied away from hyberbole, focusing instead on the next stage.

The only time the Brits ever came close to faltering (apart from when Scotty slipped jumping onto a very slippery roof after the final stage) was on the second run at the Nyckelvattnet stage on Saturday afternoon.

“That was quite a moment,” he said. “The sumpguard touched and lifted the car, it threw us into some understeer and we lost the front. That wasn’t nice.”

And that was about as animated as Evans got throughout the whole event. He’s not one for histrionics.

No sooner had he crossed the line to become the first Briton to lead the World Rally Championship since Richard Burns, post Sanremo 16 and a bit years ago, than talk started about him painting the bigger picture.

“Rally-by-rally,” was the consistent response. Quite rightly, Evans points to the wider issue of gravel pace. 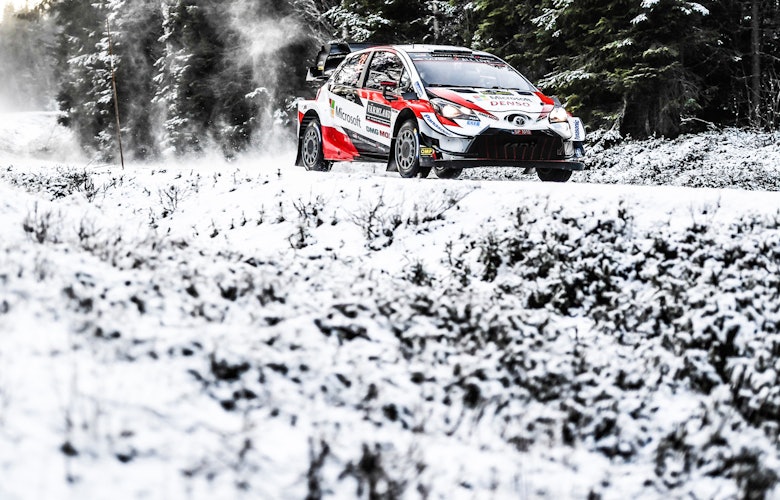 “I’ve gone well on two specific events,” he told DirtFish, “but so far that’s all we’ve done. Gravel is the mainstay of this championship, let’s see where we are there.”

It’s impossible to overplay the ice cool nature of Evans’ performance. It was like he was born to these roads in the way, say, superstar Swede and seven-time winner Stig Blomqvist had been.

Talking to DirtFish about Evans’ performance, the 1984 world champion made it quite clear he was backing Elfyn, the son of his former Ford team-mate Gwyndaf.

Blomqvist said: “It would be nice if Evans can do it, especially for his dad. His dad was so close to getting good with Ford, but he never really made it – now he can get it back with the son, I hope.”

Talking to the best of the rest – starting with Evans Jr’s former M-Sport team-mate Ott Tänak – it was impossible to find anybody who begrudged the winner the spoils of his second career WRC success. Look out for Tänak’s complimentary words about his former colleague on DirtFish later this week.

Evans’ performance answered plenty of questions last week, but it also begged the question of where the pace had come from. Again, DirtFish is the place for Evans’ own exclusive analysis of how he’s done what he’s done – look out for that later on Monday.

I’ve known Mäkinen for a good few years now and I can honestly say it’s been a while since I’ve seen him anything like as emotional as he was in Torsby on Sunday.

Even when Jari-Matti Latvala delivered him his first WRC win as a team principal three years ago, it’s hard to think those eyes were quite so damp as they were as he witnessed this double podium in the rain.

Tänak split the Toyotas with a drive that was as determined as it was brave. The Estonian’s runner-up spot demonstrated the sort of inner-steel those across the Baltic Sea would call sisu. 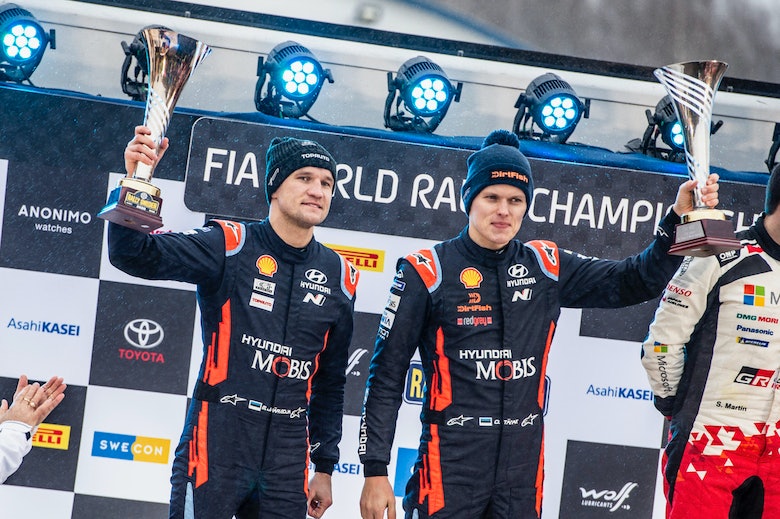 Just three weeks after a terrifying 14-second crash that ended with him and Martin Järveoja tumbling down a cliff, the pair were back aboard an i20 Coupe WRC racing through some of the most changeable conditions in recent history.

But this time, they had no gravel-note crew telling them when the dry conditions would end (having likely whipped out a few of the 384 studs in each tyre) and the ice would begin again.

Tänak drove the drive of a champion.

But it’s the other podium-dwelling Yaris WRC we need to look at.

And back to Mäkinen.

“I don’t know what to say,” he said. “Brilliant. Brilliant. They are both just flying. All the time flying.”

Rovanperä Jr smashed the previous record for the youngest ever podium finisher in WRC history (Evgeny Novikov, 21) and established a new benchmark as the only teenager ever to have accomplished it. 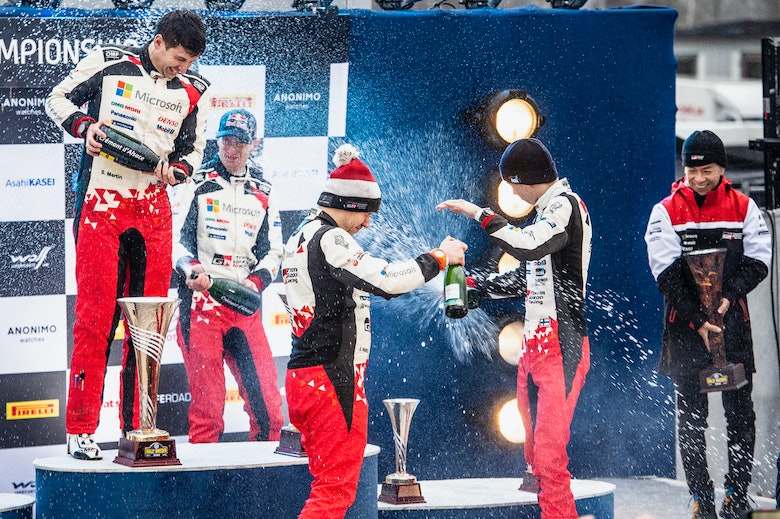 And he did it in a similar fashion to Evans. No fuss, no fanfare, just full throttle.

Half a second down on team-mate Sébastien Ogier going into the powerstage, there wasn’t a team order in sight. Not that anyone reckoned on Ogier needing them; he’s not known for losing final-stage shoot-outs.

But he lost this one. Rovanperä went quickest (oh yeah, we forgot to mention he scored his first ever powerstage win as well!) and edged the six-time champ by 3.4s.

The response from Kalle: “I wasn’t sure it was enough. I looked after the tyres in the gravel section and then pushed hard on the ice…”

Ice cool. Total calm. In his world, 19-year-olds making history and casting rally Gods into the shade is par for the course. It’s what he does. And what he’ll continue to do. For how long Tommi?

Mäkinen laughed long and loud. Sitting next to him in the green room for the FIA’s post-event press conference, Evans and Rovanperä tucked into a Sunday afternoon burger.

Olsson and his team deserved a Big Mac of their own. Not for the first time, they’d pulled a cracker of a rally out of nowhere. But these years of gambling on the weather are done. FIA president Jean Todt emerged from the gathering weekend gloom to make it quite clear Rally Sweden’s future was safe in the championship.

Safe that is, providing they put the winter back into the winter round.