Krogstad held a five-point advantage over Olsbergs MSE’s Linus Östlund in the Nordic standings going into the season finale, with  Jesse Kallio a further point behind and STS RX’s Simon Olofsson seven points off the top.

While not in contention for the Nordic title, Guillaume De Ridder was also one to watch as he had won the previous day’s round, which along with the Sunday races formed the entirety of this year’s RX2 season.

However Östlund’s title hopes were almost totally extinguished in Q2 when he was side-swiped by his team-mate Martin Enlund as he exited the gravel joker loop. The contact sent Östlund into multiple rolls and thankfully he emerged without injury.

His car was a total wreck though, and it required help from across the paddock to enact repairs to ensure he could line up for Q3. He would make the semifinals, but after the race he dropped out of the title battle.

In the final it was Krogstad who started on pole, and with the Nordic Lites title all but in the bag he had his eyes on third placed starter De Ridder who still held the RX2 points lead.

Kallio’s opening lap attempt for the lead instead handed second place to De Ridder, and after losing another spot he took to the joker as quickly as possible. De Ridder was next to use the alternative route and he emerged ahead of Kallio, having been all over Krogstad’s rear before entering the longer section of track.

A twist came in the form of Gustav Johansson, who spun on the entry to the joker. Leader Krogstad had to weigh up how he could take to the extra gravel segment without hitting the stationary car, and he waited until the final lap before taking the risk. It cost him time but he avoided contact and emerged still ahead of De Ridder.

He only had to hold off the Belgian for half a lap after that, which he did to claim both the Nordic Lites and RX2 titles, the latter by a single point over De Ridder. Kallio finished third, JC Raceteknik’s Jimmie Walfridson was fourth and Olsbergs’ Niklas Aneklev finished the final in fifth. 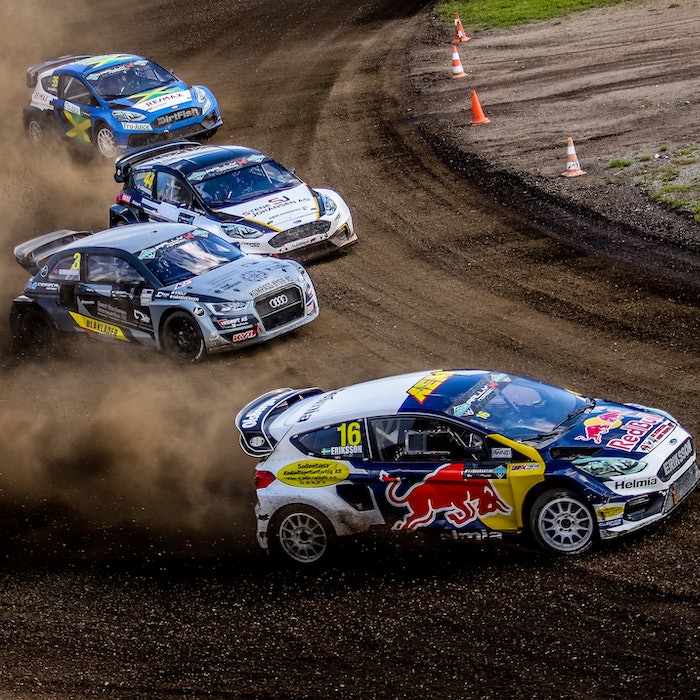 Oliver Eriksson achieved a long-held goal of becoming RallyX Nordic champion in the final round at Nysum, where event victory went to Ben-Philip Gundersen.

“I can’t believe how I’ve done it. It was an insane joker, real old Scandinavian flick around that car standing in the entry. It’s unbelievable,” said Krogstad afterwards, who then went over to examine the all-electric eRX2 car he will get to drive next year as his RX2 title prize.

Jimmie Österberg took an easy win in the final in the season finale for the entry-level CrossCar category, running alone at the front before taking to the joker lap at the end and claiming the win. He beat Julle Ljungdahl and the category’s new Nordic champion Max Rundberg.

The battle for CrossCar Junior honors went the way of Alex Gustafsson after several side-by-side battles in the final. He lost the lead on the opening lap to great pass by chief title rival Erik Andersson.

Gustafsson barged his way through up the inside on the final lap, resulting in contact. The move meant Gustafsson sealed the title by two points, rather than finishing on the same amount had he remained behind Andersson.