Steve Arpin believes that rallycross in the United States has the potential to be a “fun haven” again for stars from all different forms of motorsport.

At its peak popularity in the US, rallycross attracted interest from stars all over the motorsport landscape. Arpin himself transitioned from a career in stock car racing to rallycross during the 2013 season, the same year that former Formula 1 and NASCAR racer Scott Speed also made the move.

The likes of Carl Edwards, Casey Mears, and Jenson Button all expressed an interest in making similar moves at some point during Global Rallycross’ heyday too, while Kurt Busch even tested Scott Speed’s Ford Fiesta at Charlotte Motor Speedway’s dirt track in 2013 (pictured below). 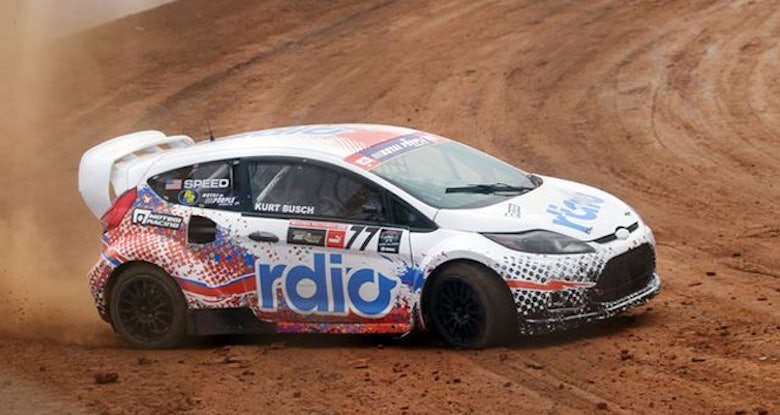 Work has been going on behind the scenes to develop a Nitro Rallycross series off the back of the discipline’s appearance at the Nitro World Games over the last two years.

With those developments in mind, Arpin now believes that rallycross in the US is regaining the ability to pique the interest of stars from the wider motorsports landscape.

“I think as soon as we get a stable platform, this discipline is so much fun, these cars are so full of technology, [and] the thrill of driving these cars is so incredibly high that I think that I think it’ll be more of a fun haven, if you want to call it that, for professional drivers of many different disciplines from all over the world,” Arpin told DirtFish.

“But the biggest thing is we just have to have a stable platform that we can make genuine business sense out of it because the one part about the cars being incredibly fun and so powerful and technologically advanced is they come with huge expenses to operate them.

“We’re hoping to get that kind of platform back that we were on the way to building in the past with GRC before that went belly-up and if we can get there again I think it’s absolutely 100% a place where you’ll see lots of guys migrating to just for the fun of it.”

Arpin has been heavily involved behind the scenes on the development of Nitro’s new series and is hugely positive about the direction rallycross is taking in North America.

“Honestly I’m absolutely thrilled with everything Nitro is doing, and their attention to detail and their willingness to do it right,” he said.

“They’ve kind of taken it slow, they’ve put one event on the last two years trying to understand it, figure out exactly what works and what didn’t work, and then now they’re trying to go a full series.

Away from rallycross, Arpin has his sights set on more stock car racing. The fan favorite already got his 2020 motorsport season underway with a Dirt Modified appearance at Electric City Speedway in June, and has expressed an interest in competing in Tony Stewart and Ray Evernham’s new SRX series, and that in turn could potentially entice others to sample rallycross.

“I had a great chat with Ray and his team shortly after they made the announcement. There could be the potential for a collaborative effort there and that being a reciprocal thing for drivers going back and forth both ways.”