Travis Pastrana claimed the first full-season Nitro Rallycross title, beating Subaru team-mate Scott Speed on countback as the two came together in the final race of the season.

Pastrana began the day in Florida with a fifth heat win in as many rounds, making him the only driver to complete a clean sweep of opening day two races for the season. But he would start the main event on the second row of the grid, after Scott Speed and Timmy Hansen – both of whom had better qualifying performances – also won heat races.

Speed started the final from pole position and made the best start to lead fellow championship contender Timmy Hansen into the first corner, but contact from Kevin Hansen on Pastrana brought the two Subarus together.

That sent Speed wide and out of the top three, while simultaneously opening the door for Timmy Hansen who had to finish ahead of both Subarus to be in with a chance of winning the title.

Speed and Kevin Hansen were among the drivers who chose to take the longer joker lap on the first tour, while Timmy Hansen and Pastrana remained out in front.

Although he had the measure of Pastrana for much of the asphalt-heavy lap, Timmy Hansen took the unusual step of jokering on lap three of six, which gave Pastrana clear air at the head of the field, while dropping Timmy Hansen into traffic.

Behind him Kevin Hansen was continuing to make life difficult for Speed, who needed to get by the Peugeot man to keep his championship hopes alive.

When Pastrana finally jokered on the last lap, he emerged in fourth behind both Hansens and Speed. Timmy Hansen had resumed position at the head of the field, and led home Kevin Hansen by 1.187 seconds at race end.

Speed took third in the final ahead of Pastrana after recovering from the lap one incident, with Robin Larsson rounding out the top-five ahead of Tanner Foust, Steve Arpin, and Chase Elliott.

Elliott, the 2020 NASCAR Cup Series champion, progressed to the final after finishing second to Arpin in a manic second semifinal.

At the initial start, Arpin passed Oliver Eriksson round the outside of turn one, with both making contact. The Hyundai man then ended up beached on the edge of the gap jump take-off ramp, necessitating a red flag.

Once the grid was reformed and the race restarted, Eriksson stalled on the grid and was clipped by Liam Doran, the contact tearing the right-rear wheel off his Audi and bringing another stoppage to proceedings.

At the third time of asking, Arpin once again bettered Eriksson off the start, but that contact with Doran had caused a bodywork rub that would later manifest itself as a puncture. Eriksson’s team-mate Fraser McConnell jokered on the second lap but collided with Oliver Bennett on the merge and went off course.

That would prove crucial, because by the end of the four-lap contest Elliott had closed right up to the Ford driver McConnell, but with McConnell’s deviation getting punished by the stewards the positions were reversed, giving Elliott second behind Arpin and a transfer spot to the final.

McConnell would later retire from the Last Chance qualifier after a fast start due to drivetrain failure, with Foust going on to win that race. 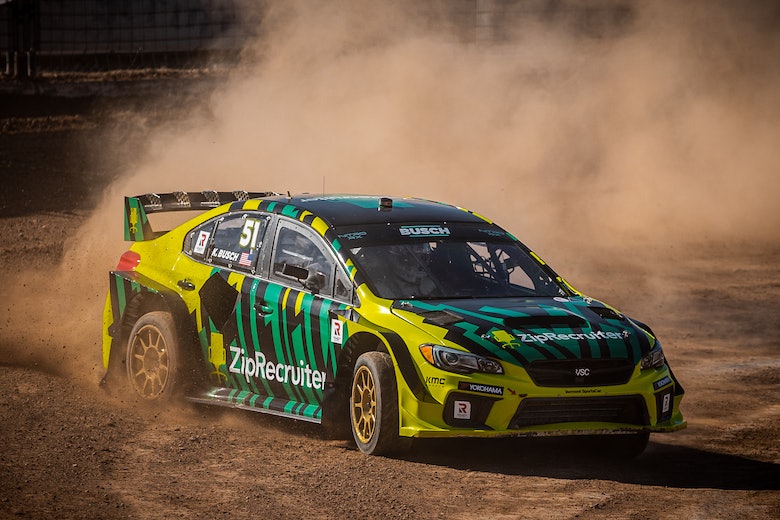 Kyle Busch's rallycross debut in his own words

While Speed equaled his team-mate’s points tally, Pastrana’s two wins in the season to Speed’s one gave Pastrana a maiden rallycross title and marked the first defeat for Speed in full-season competition since 2014.

Timmy Hansen’s win – his second of the year and third all-time in Nitro RX – brought him to within a single point of the Subarus, while race runner-up Kevin Hansen had already locked in fourth in the points after the previous event in Southern California.

A fifth win of the season was not enough for Sage Karam to prevent Casper Jansson from taking the inaugural NRX Next title in the final round.

Karam, whose win tally is higher than anyone else in the field but failed to start the season opener due to mechanical issues, led from pole with his Dreyer & Reinbold Racing team-mate Conner Martell leaving the door open for him in the first turn.

From there Karam was unchallenged for the rest of the six-lap final. From the second row of the grid, Jansson quickly moved up to second behind Karam, and followed him into the joker – a shorter route for the support classes rather than the longer one used by the Supercars.

Despite matching the strategy of the leader, Jansson settled into second, which was enough for him to take the championship crown, therefore not jeopardizing his hopes with a bold move for victory.

Jansson’s championship victory comes in his first full season racing RX Lites machines. He began the year racing the same one-make category on the RallyX Nordic bill before competing full time in the US.

Martin Enlund, another driver who came into this weekend with hopes of the championship, finished third in the race and the championship, Karam’s win moving him ahead of the Swede in the points at the final moment.

Conner Martell, who missed the first four rounds of the season, finished the race fourth while Kyle Schwartz rounded out the top-five.

Geroge Megennis was in podium contention early in the race before a coming together with Martell dropped him down to seventh on the road. Megennis ended his first full rallycross campaign fourth in the points.

Mikaela Åhlin-Kottulinsky took a commanding win in the second Side-by-Side final of the weekend as early leader Blake ‘Bilko’ Williams flipped out of the race.

After jokering on the first lap, Bilko made a move on polesitter Robbie Maddison to take first at the end of the opening lap, with Åhlin-Kottulinsky following through. But at the beginning of the second tour the Nitro Circus regular dug a wheel into a ditch, sending his CanAm catapulting through the air.

That gave first to Åhlin-Kottulinsky, a position she wouldn’t relinquish, despite pressure from Hailie Deegan, and then Kory Willis after the NASCAR racer dropped back after a mistake on the asphalt.

Willis attempted to close in on the leader during the final laps, but couldn’t get near enough to pass Åhlin-Kottulinsky and take a second win in as many days. Meanwhile, Maddison, who’d saved his joker to the final lap, vaulted from fifth to third on that sixth tour to complete the podium.

How the odds were overcome for WRC3’s title at Monza