With four rounds from two weekends now in the books, we’re starting to get a better idea of how the 2020 World Rallycross season is shaping up.

Once again, DirtFish’s Rallycross editor Dominik Wilde and Stephen Brunsdon have cast their eye over the field to rank their top 10 drivers of the season so far. There’s been a little movement since Höljes, and even a new entry, although things at the top may still be familiar…

Who? What? How? Finnish Rallycross champion Juha Rytkönen might be a big deal at home, but on the world stage he was a rookie at Kouvola, although you wouldn’t have guessed it.

The Hyundai driver took to the series like he’d been in it for years, taking a heat win and a stunning podium on Saturday, being beaten only by Johan Kristoffersson. Come Sunday there were two more heat wins and another final berth, which was taken away at the 11th hour due to a track limits infringement.

He might have only competed in half of the races we’ve had so far, but he easily did enough to earn a spot on this list. – DW

That the Seat Ibiza continues to feature in the business end of World RX rounds is solid proof that it, as well as its driver Timo Scheider, deserves recognition.

Scheider didn’t enjoy as much success as he did at Höljes but it was another impressive all-round performance from the German, who is showing each round that he is becoming a true World RX threat. – SB

After a Höljes weekend which was largely bittersweet, Larsson had hoped that his fortunes were going to change in Finland.

The pace continued on from the opening weekend, as did the flamboyant style which helped secure the valuable holeshot in the qualifying heats, but the bad luck unfortunately cost the JC Raceteknik driver a place in each final. – SB

The record books will show that Kevin Hansen only made one final in Finland. What they won’t show you is that he missed the second of those by just 0.060s.

It was another decent weekend for the Sweden podium finisher, who missed out on repeating that feat in round three after an awkward jump landing undid his charge to the higher positions.

Come Sunday there was pace again, but the rain arriving at just the wrong moment put him at a disadvantage in the final part of qualifying, and then the semifinal played out in a way where only one Hansen could advance. It just wasn’t Kevin’s time.

But it goes to show that good weekends don’t always return good results. Kevin Hansen definitely had a good weekend, even if the results don’t show it. – DW

Such was the battle in Sunday’s final, you didn’t quite know who to watch out for. Timerzyanov’s performance in the six-lap encounter must not be underestimated. It was a superb effort from the Russian, who kept banging in the lap-times following his third-lap joker to keep the pressure on Kristoffersson in front.

While the top three tried not to run into each other, Timerzyanov kept it clean and made the most of the slightest of slides at the penultimate corner from Kristoffersson to snatch a well-deserved third place finish. – SB

The shining light in an otherwise troubled GCK stable, Andreas Bakkerud managed two solid days in Finland after an up-and-down weekend at Höljes, unlike the rest of the five-car operation – including Anton Marklund who only just slips off this list after an impressive time out in Sweden.

Bakkerud’s weekend, though, was solid. A heat winner on Saturday and a finalist on Sunday, he was the only driver who wasn’t right in the thick of it in that final race. And that’s not a reflection on him by any means – broken windshield wipers are difficult to work with on a wet and muddy day. Had they worked, there’s no doubt he would’ve been a victory contender. – DW

A first podium of the season on Saturday was just reward for a Hansen Motorsport team which had worked itself to the bone during the week to rectify the issues it experienced at the opening at Höljes. Third in the final behind Kristoffersson and wildcard Juha Rytkönen was hardly what the reigning World RX Champion would have wanted before the start of the year, but it was a fighting driver nevertheless and showed just how determined the steely Swede is.

The pace wasn’t quite there when it mattered come Sunday, but another appearance in the final is a big confidence boost to the Peugeot driver. If conditions had not been as treacherous as they were, perhaps Hansen’s weekend could have been even better. But make no mistake, Hansen is getting right back in the mix. – SB

Whether Ekström continues on to the next round in Latvia or not, the 2016 World RX Champion has shown his class in the two double headers so far in 2020 and arguably could have won Sunday’s final if things had fallen into place.

An electrical issue in the semifinal on Saturday ruled the Team KYB JC Raceteknik driver out of the final won by Kristoffersson but the response on Sunday was that of a true champion. His pace behind Grönholm in the final was immense and, had it not been for the tighter confines of the Kuovola track, he may well have been able to find a way around the Finn before the final-lap joker. – SB

Finally! Many people’s pre-season favorite has got a win on the board. He had to work for it though.

After a tough time in Höljes the GRX team set to work ironing out their issues at a mid-week test. The running paid off and although a puncture robbed him of a real shot at victory in round three, round four went his way.

He had to resist incredible pressure from both Johan Kristoffersson and Mattias Ekström, but to prevail after having six laps of his mirrors being full of Volkswagen Group machinery, that showed why he belongs right at the sharp end of our rankings and World RX as a whole. – DW

There wasn’t really any doubt about whether Johan Kristoffersson was slipping down the order, was there?

Another faultless Saturday was followed by another strong Sunday. He didn’t finish on the podium in the second event of the Finland double header, but he was right there in the final and was arguably quicker than race winner Grönholm.

He’s still leading the points too, but you already knew that, didn’t you? – DW 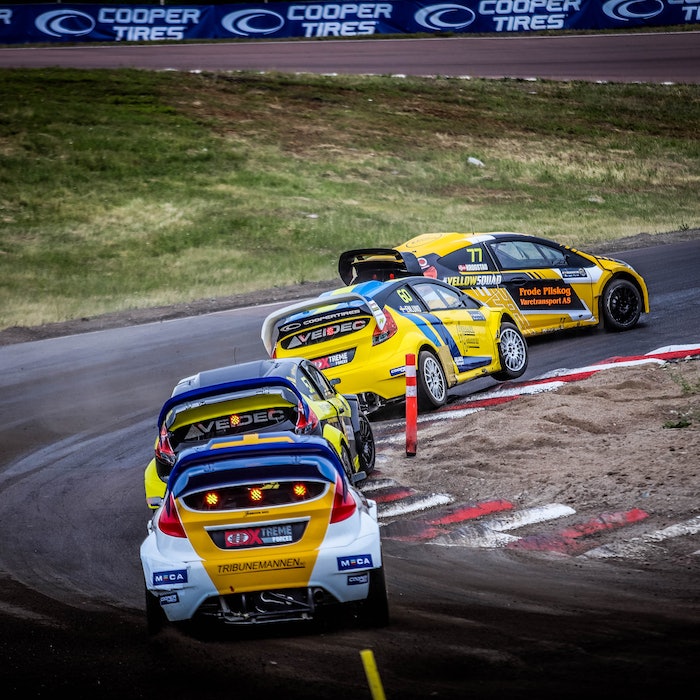 Kristoffersson could win a title this weekend, as RX Nordic concludes at Nysum. He's not there though, so who can beat him? Buy a 199 SEK ($23) streaming pass to find out by watching live