Norway’s Andreas Bakkerud has become the first ever driver in FIA World Rallycross Championship history to win all four qualifying sessions [Q1-Q4] plus the semi-final and final. Sweden’s Timmy Hansen took the runner-up spot at this weekend’s NAF World RX of Norway while his compatriot Mattias Ekstrom took the third podium spot. Ekstrom continues to lead the overall driver standings after five rounds, five points clear of Petter Solberg who is second.

Bakkerud, who drives a Ford Focus RS RX Supercar alongside Ken Block in the new-for-2016 Hoonigan Racing Division World RX team, scooped the maximum 16 points for finishing TQ [Top Qualifier] after four qualifying sessions. He went on to win his semi-final and the final to secure the total 30 points available on an event weekend. Bakkerud’s healthy points haul has catapulted the Norwegian to fifth in the standings – two points adrift of Johan Kristoffersson and Sebastien Loeb who are joint third.

“To win my home round on our home track is the best feeling in the world – I’m living the dream,” grinned 24-year-old Bakkerud. “The team has been working really hard for this and now we have the pace with the Focus, all the hard work has paid off. Timur [Timerzyanov] was really quick, I was scared of him going into the final as he was definitely the man to beat this weekend. I pushed as hard as I could and this win is for my fans and for my team – thank you to them all for the support, it means so much to me.” 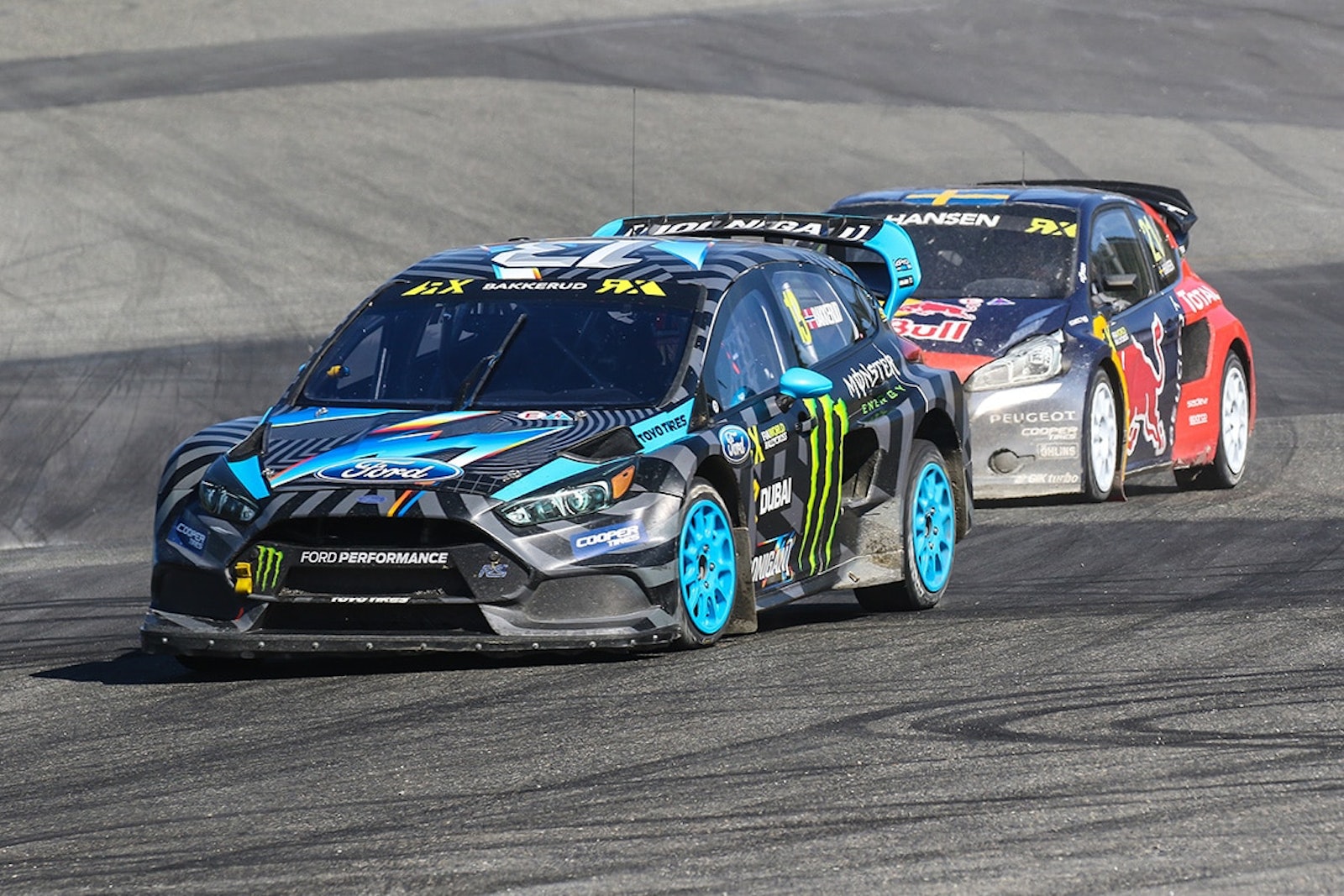 Runner-up Hansen was first to congratulate Bakkerud on his win. “Andreas did a really good job this weekend – to win in front of a home crowd is an incredible feeling and he deserves this moment,” said the 22-year-old Team Peugeot-Hansen driver. “During the final, I was right on Andreas’ bumper and the speed was there. I finished third at Lydden Hill and now I’m second in Hell so next is Holjes for my home event which of course I am really looking forward to. The Championship is long but we’re getting closer to where we want to be.”

Third-placed Ekstrom added: “We had a difficult start to the weekend and struggled with our tyre choice after we had to re-run our race in Q2 yesterday. Timur’s pace was unreal in the semi-finals but I learned a few things from him and was on his tail during the final but then he got the puncture. Overall, it’s an amazing result for the team after a long weekend. Now we will attend our home event in Holjes as overall leaders in both championships and I want to make it three in a row.”

Reigning Champion Petter Solberg finished fourth, the Norwegian having started on the back row of today’s final. “This has been by far the toughest weekend I have had in this Championship,” admitted Solberg. “We tried everything we could without risking too much, but we couldn’t find one answer to where the speed was going. We knew where we had to be and where we were losing the time, but not exactly why.”

Russia’s Timur Timerzyanov lined up on the front row of the final alongside Bakkerud after setting a blisteringly quick time during the second semi-final. The World RX Team Austria driver got off to the perfect start, winning the Monster Energy Super Charge Award after his rapid start off the line. Timerzyanov opted for a lap one Joker and was locked in a battle with Bakkerud until a puncture put his Ford Fiesta out of contention for the win and he slipped back to sixth.

Volkswagen RX Sweden’s Johan Kristoffersson finished seventh after a difficult weekend in the Polo RX Supercar. Latvia’s Janis Baumanis was eighth – the World RX Team Austria driver denied a spot in the final after his Fiesta suffered broken steering in the semi-final. Finland’s Topi Heikkinen was ninth to consolidate EKS RX’s position at the top of the teams’ standings. Robin Larsson finished tenth in his privately-run Audi.

In the second round of the FIA European Rallycross Championship for Supercars it was a dream weekend for Sweden’s Kevin Hansen who racked up four qualifying wins plus the semi-final and the all-important final. It marks the second win in a row for Hansen who also took the Euro RX victory at the season-opener in Belgium last month. Norway’s Tord Linnerud and Hungary’s Tamas Pal Kiss finished second and third respectively. Hansen tops the Euro RX leaderboard, 12 points ahead of Frenchman Jerome Grosset-Janin.

In the fourth round of the RX Lites Cup, it was Norway’s Thomas Bryntesson who took the overall win in front of an elated home crowd. Frenchman Cyril Raymond clinched the runner-up spot while Simon Olofsson was third. Bryntesson’s win has resulted in him closing on series leader Raymond with only one point separating the two drivers.

In the TouringCar Championship, where Hell RX formed the second round of the five-event series, it was Sweden’s Philip Gehrman who triumphed in his Ford Fiesta. Norwegians Per-Magne Royras and Fredrik Magnussen finished second and third respectively. In the overall standings, Magnussen now leads – two points ahead of Ben-Philip Gundersen. Sweden’s Magda Andersson was unable to repeat her round one victory after retiring from her semi-final with front suspension damage.

World RX Managing Director for IMG, Paul Bellamy, concluded: “It’s been a sensational weekend in Norway. We’ve had a packed crowd of 20,000 people, which is up from last year’s figure of 19,000, and we’ve also witnessed our first home winner in Norway with Andreas Bakkerud taking the victory. The reaction from the crowd when Andreas crossed the finish line was electric and it’s even more impressive when you consider that he is the first driver in World RX Supercars to win all four qualifying sessions, the semi-final and the final. What Hoonigan Racing Division has achieved with the Focus RS Supercar in such a short time is incredible. I would also like to congratulate the organisers of Hell RX and all the volunteers involved who work very hard to put on a fantastic show and festival weekend for the fans.” 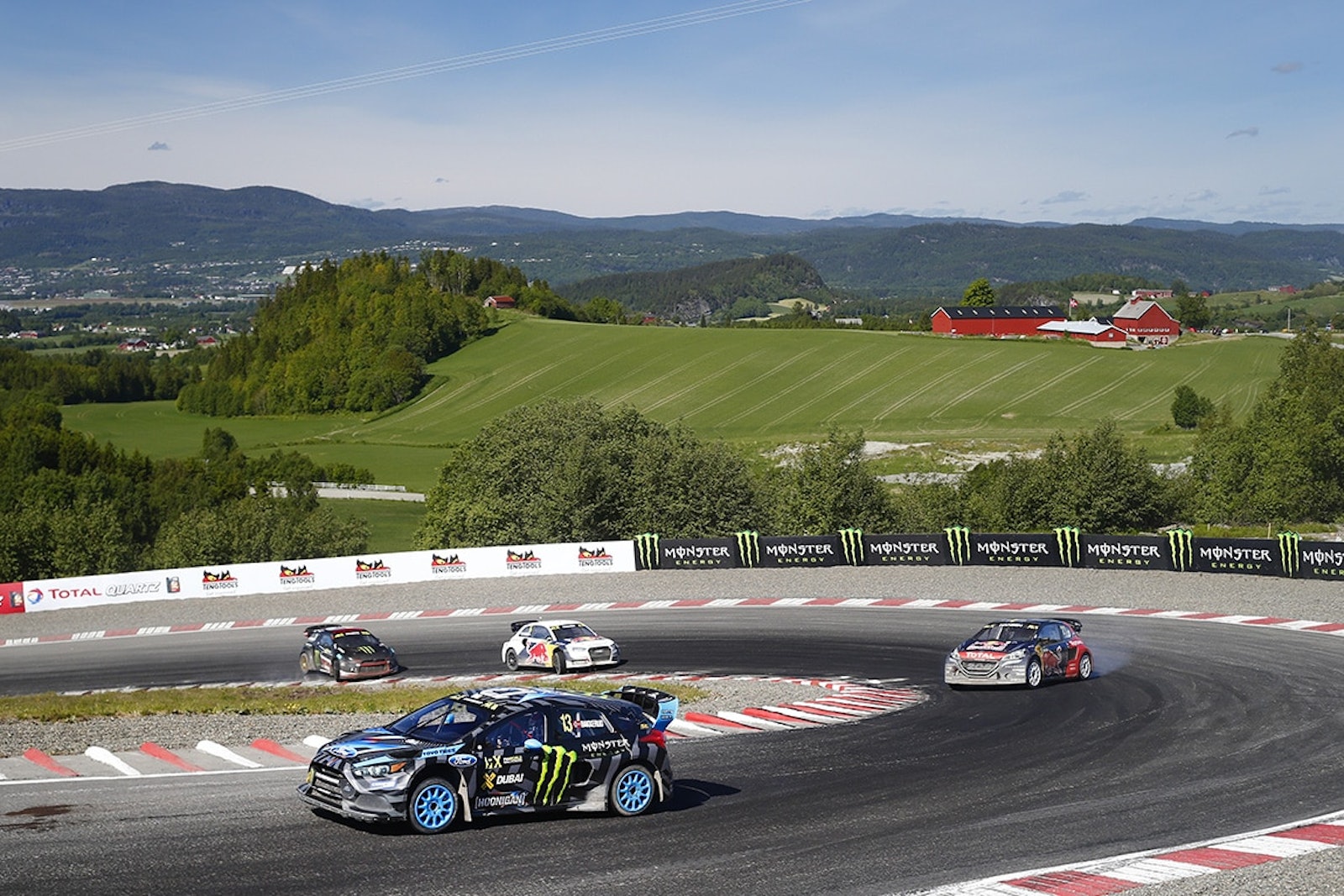 The sixth round of the FIA World Rallycross Championship presented by Monster Energy takes place at Holjes in Sweden in three weeks’ time (2-3 July). Entries for Holjes RX will be released on Thursday 16 June.

Full results from NAF World RX of Norway can be found on the following link:

Copyright-free pictures for media purposes can be found here: