Finding a happy medium between pleasing the manufacturers participating in the World Rally Championship and the paying fans watching the action is the narrowest of tightropes to walk. Current-era WRC cars have done a reasonable job in that respect, and while critically unsafe and rather expensive, Group B was able to strike that balance for the most part.

But this equilibrium really reached its peak in the 1990s.

Group B may have had homologation specials – the real McCoy built for road use to satisfy minimum production quotas enforced by WRC regulations at the time – but those select few cars were hideously expensive to buy and required round-the-clock care and nurturing to drive every once in a while.

The 1990s changed all that. While some decried the end of rallying as Group A was ushered in, it was the beginning of a golden era for gearheads of the rallying variety. Once you’d been out on the stages at the weekend, you could head to the showroom on Monday morning and buy something that looked like, sounded like, and came pretty close to going like the cars you’d seen the day before.

No car exemplifies this more perfectly than the Subaru Impreza 22B. It is, without question, the most coveted Subaru ever built.

Special editions are nothing new. Every car tends to get one during its lifecycle. But the 22B is the most special of special editions.

Only 400 were made; 403 if you count pre-production prototypes and 424 including a very limited second run for the UK and Australian markets. That’s not much, but it’s not the rarest of rare cars either. Twice as many 22Bs were built than road-going versions of Group B legends like the Peugeot 205 Turbo 16 and Ford RS200. And there’s other special edition Imprezas which were built in smaller numbers too, like the Series McRae and Catalunya, again with only 200 examples apiece.

It looks the part like no other Impreza, for starters. Countless Impreza owners have dressed up their WRX and WRX STIs to look like the offices of Messrs. McRae, Sainz, Burns, Solberg and co. over the years, but none came out the factory looking like they’d been built for the WRC stages like the 22B did.

Sonic Blue Mica paint, flared wheelarches, bulging bodykit and 18-inch BBS gold alloy wheels looked the part in the way aftermarket mods couldn’t quite match; find a 22B that’s been stickered up to look like its WRC counterpart and the resemblance is incredibly striking.

There’s extra kudos in Subaru circles for its JDM status too. Back in ’98, the model year of the 22B, you’d have to settle for a four-door in markets outside of Japan. Not so with the 22B: it was based on the WRX STI Type R, a two-door coupé flavor of Impreza limited to Subaru’s domestic market.

For those more interested in rally heritage than JDM provenance the extra-rare UK models are just the ticket. There’s only 16 of them and they were all given some minor tweaks by Prodrive, the team behind Subaru’s all-conquering WRC program that had just won a third-straight manufacturers’ title, which in turn had inspired the 22B’s existence. They’ve got a bit more top speed and also a miles-per-hour speedometer, which means fewer speeding tickets for any prospective American owners compared to the JDM version’s kilometers-per-hour readout. 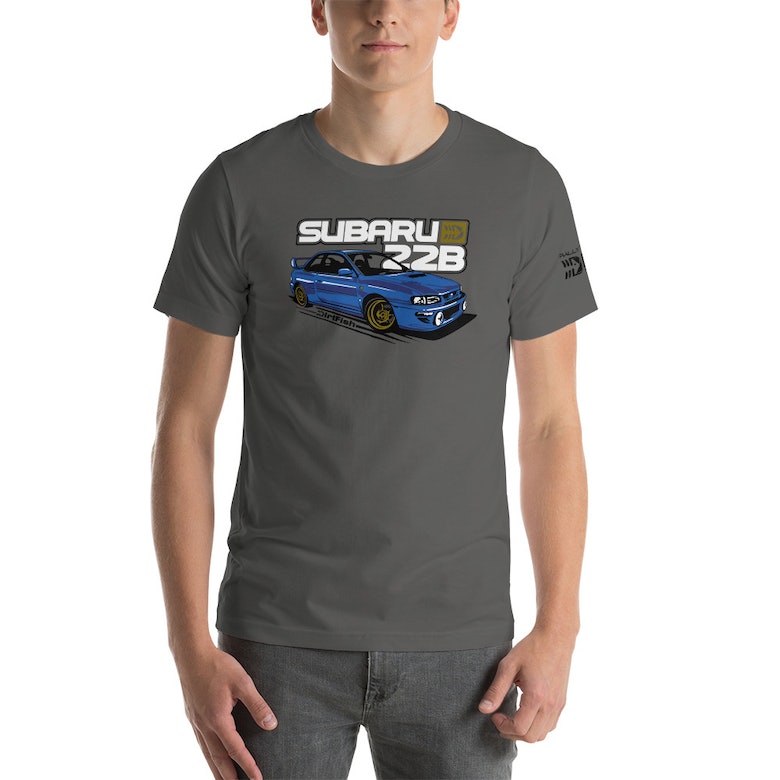 But it’s the performance that really makes this Impreza stand out. No doubt all WRX STIs are rapid, but the 22B took it up another notch. The clue’s in the name: 22 references the increased engine capacity, up from 2.0 liters to 2.2 liters. As for the B? Some say it stands for Bilstein, who supplied the dampers. Some say it stands for Boxer, though that’s a tad redundant given all Impreza WRX STIs have a trademark burbling boxer engine under the hood. No, we like to think the B stands for Blowyoursocksoff.

Japanese regulations capped power output at 276bhp. Ask anyone who’s driven a 22B – or tested one on a dyno – and they’ll probably tell you that figure is nonsense. It might not have massive top speed but show it some corners and the 22B doesn’t so much zip around rapidly as it does teleport you into the next zip code.

Those aforementioned Bilstein dampers and Eibach springs were complimented by a set of bigger brakes and more responsive steering. There was also a central differential with real-time torque adjustment in the center console, with the option to send up to 65% of the car’s power to the rear wheels if desired. In terms of bang for buck, you’d need to spend far more to get a car as good through the twisty stuff as the 22B or its arch-rival, the Mitsubishi Lancer Evo VI Tommi Mäkinen Edition.

That might make it sound like a delicately balanced ballerina. It’s emphatically not. That 2.2-liter turbo engine is visceral, with an edge that alludes to its WRC inspiration that the regular 2-liter motors don’t quite have.

So, you want one? Yes, of course you do. But so do thousands of other Subaru gearheads. And there’s less than 500 of them. As respected British car journalist Dan Trent has also pointed out in the past, the 22B was so sought after that McRae, who’d won Subaru its only WRC drivers’ title up to that point and contributed to all three manufacturers’ titles between ’95 and ‘97, was made to pay for his 22B. One that’s been treated well is likely to go for over $100,000 nowadays; one of the three prototypes sold for $140,000 at auction back in 2017.

At least I can afford one of DirtFish’s 22B t-shirts, then buy a WRX STI and still have about $70K left over. I’ll leave the 22B for people who’ve got a bit more McRae in them than me.