When you type “Group B rally” in your favorite browser and look up images, your screen is most likely dominated by photos of the infamous Audi Sport Quattro with its massive wheel arches and flamboyant aerodynamics package. The Audi is the car that comes to mind when most motorsports fans reminisce about the “Golden Era” of the World Rally Championship. What a lot of people tend to forget is that the year after Group B was introduced, it was actually dominated by a small mid-engine, two-wheel-drive Italian car that has a stronger resemblance to a sports car than a rally car.

The Lancia 037 made its stage rally debut in 1982 when they were plagued with issues and forced to retire from the majority of the races. However, that all changed during the 1983 World Rally Championship. With WRC Champions, Walter Rohl and Markku Alén, behind the wheel of the Martini Racing-clad cars, Lancia won yet another Manufacturers’ Championship. To top that off, the 037 became the last two-wheel-drive car to ever win the WRC. The Italian team was even able to dominate the more powerful, four-wheel-drive Audi Quattro. 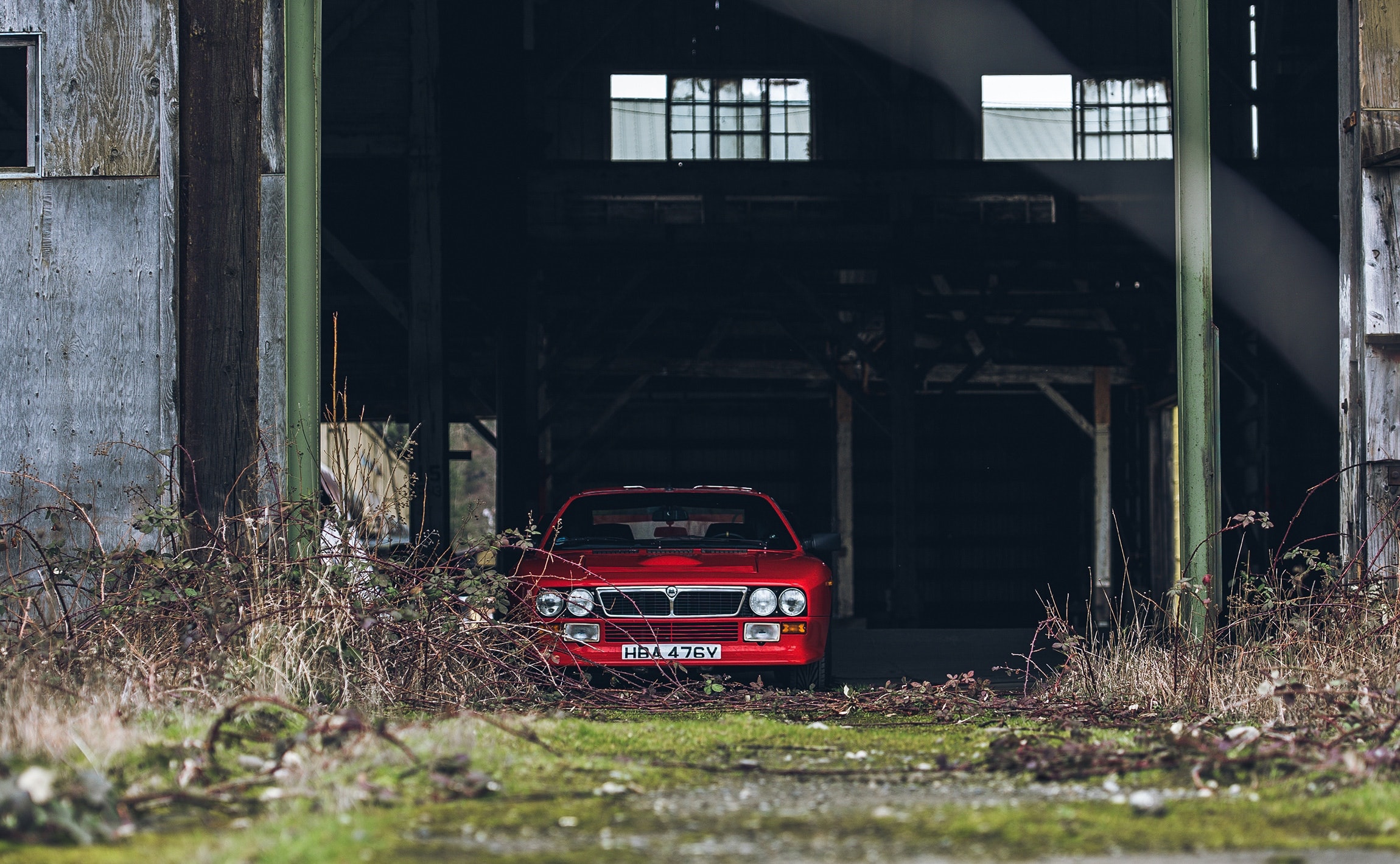 The Lancia 037 is one of the sleekest and most stunning cars ever to grace the rally stages. If you were to see one driving down the road, you might be inclined to say, “That’s a sweet Ferrari!” and only the most die-hard rally fan would hold that against you. But, to be honest, it does look very similar to a Ferrari, and there is a good reason for that. To build the Lancia 037, Abarth teamed up with the world-renowned automotive design firm, Pininfarina. This firm has had a hand in designing everything from Ferraris to Cadillacs and everything in between. However, to say that their focus has been on Italian cars would be an understatement. The 037 is only one of the eighteen Lancia’s that Pininfarina has blessed with its beautiful design work over the years. In the United States, the 037 just recently began to gain some attention. However, in Europe, they are viewed as the Italian god-like cars they were meant to be. From a distance, the vibrant red car looks more like an Italian sculpture than a car built for the rigors of the World Rally Championship. The closer you get to it, the more the 80’s Italian craftsmanship begins to show. I’m starting to see why they made it such a bright color! Like those of nearly every Group B car, the body panels don’t quite line up. If you’re up to speed on your Lancias and Fiats, you’ll notice that there are quite a few body panels that were borrowed from other models. For example, the overall body comes from a Montecarlo. The Montecarlo didn’t have enough headroom to accommodate a driver and co-driver with helmets. So, what did the designers do to fix this issue? They cut a hole in the roof and fitted a double bubble! 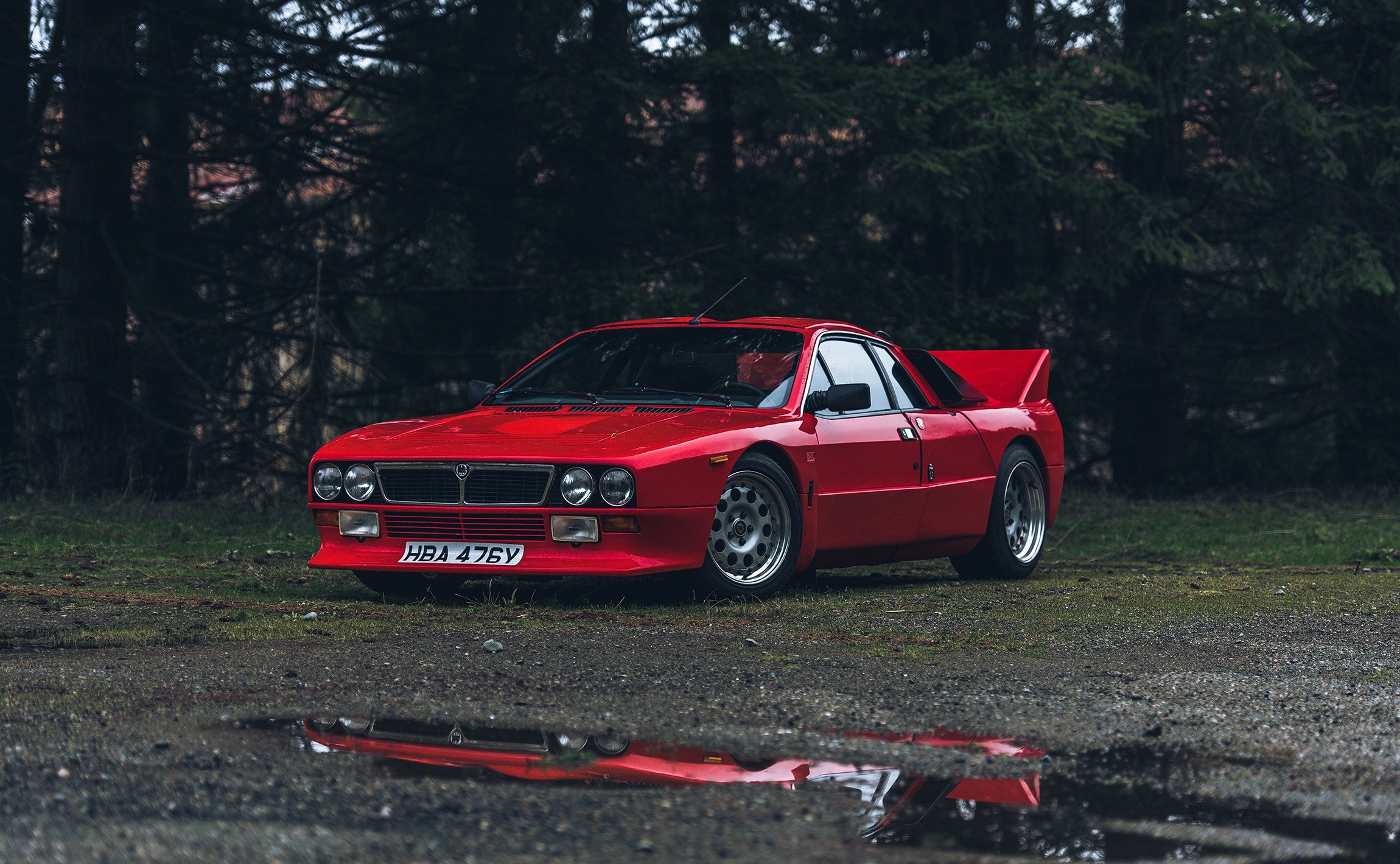 The Italians are notorious for doing things a bit differently than everyone else, and this car is no exception. Rather than fitting a turbo that is bigger than the head of a high school quarterback, they decided to mount a supercharger on top of the carbureted 2.0 Liter inline four-cylinder engine that was robbed from the uber-successful Fiat 131 Abart. This provided modest 205 horsepower, which was eventually increased to 300 in the Evolution 1 variant and 325 in the Evolution 2. Superchargers inherently offer another advantage over turbos—linear power delivery, which is another reason the 037 is such an easy car to drive. Rather than being inundated with a massive surge of power following an enormous amount of turbo lag, you have constant—and virtually instant—power and torque. 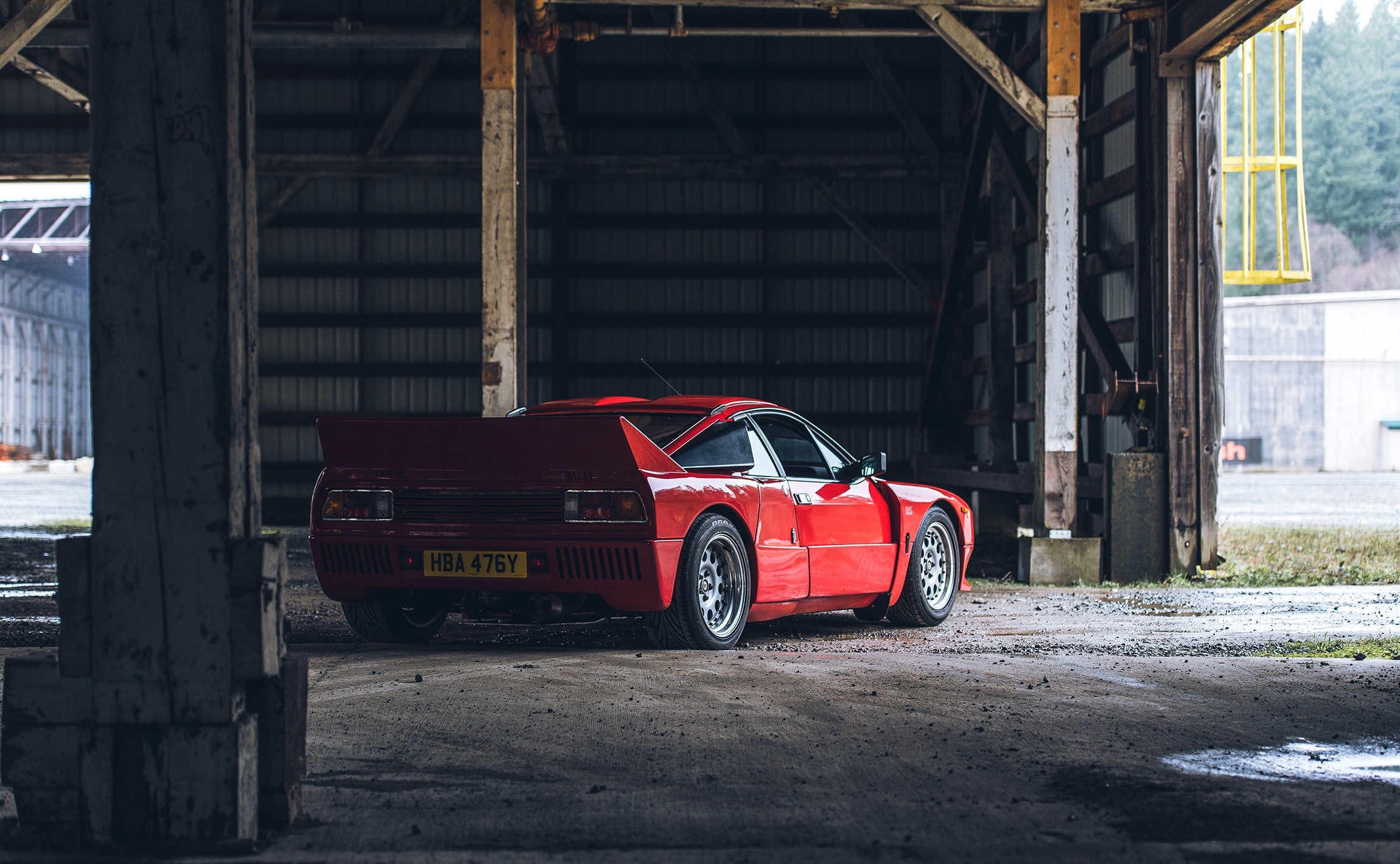 Although the car in the photos is the Stradale (street version), you can tell that it was built to be a race car. The 037 Stradale was equipped with a five-speed gearbox that featured a dogleg first gear, allowing the driver to change from 2nd to 3rd and 4th to 5th gears quicker and easier. Another piece of equipment that is typically only found on race cars is the dry sump oil system, which helps provide the car with consistent lubrication under acceleration, braking and hard turns. You would be hard-pressed to find a factory-built car these days that features a dry sump system. One of the coolest additions that I found while getting out of the car was the integrated roll cage. The craftsmanship that went into hiding it was very well-done. If you’re not looking for it, you wouldn’t even know it was there.

Unlike the Ford RS200, this car doesn’t feel like it’s waiting for the opportune moment to kill you in a fiery blaze of glory. Aside from that, it might be one of the best cars I have ever driven! Yeah, yeah, I know what you’re thinking… but seriously, the Lancia 037 is an amazingly well-engineered, well-balanced car, and it is so much fun to drive! It may not have the massive 400-600 horsepower of its Group B successors, but a lot of those cars are either uncomfortable or downright terrifying to drive. The 037 makes up for the lack of power by giving the driver an all-around fantastic driving experience without the added anxiety.

The first thing that I noticed was the multitude of sounds coming from the supercharged engine. Under acceleration, you are overwhelmed with the deep rumble of the engine and loud whine from the supercharger. As you push the revs higher, these sounds get more intense, and you begin to feel them through your entire body. It is a truly visceral experience. 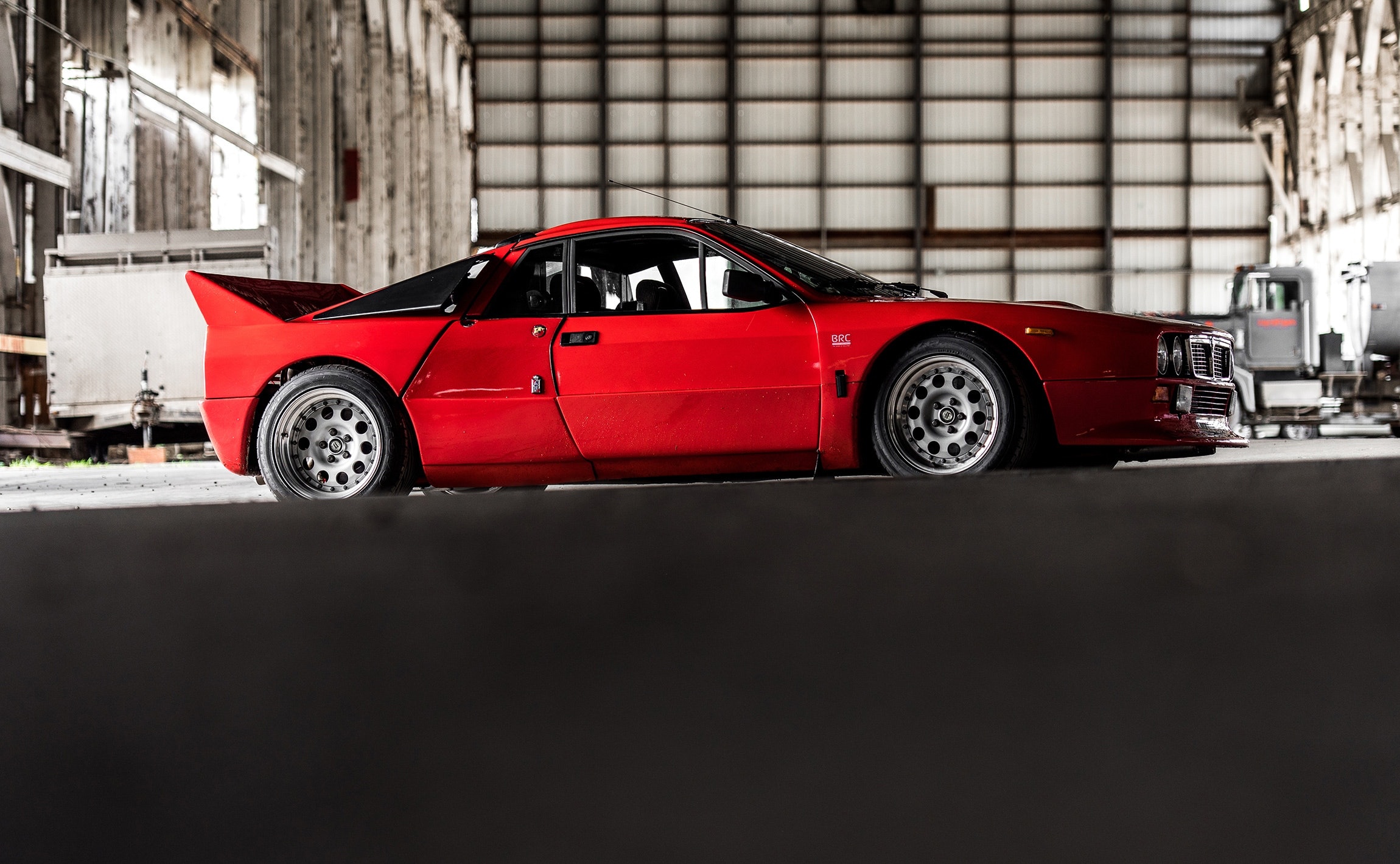 By far, my favorite thing about this car is the handling. The day I took this car out, the goal was to experience it in nearly every scenario. However, that all changed as soon as I took it to the twisting curves of Mercer Island. The beautiful thing about this road is that you can enjoy what a car has to offer without pushing it too the ragged edge. The moment that I made it through the exit of the first corner, my plan for the day had changed. My new goal? Find more curvy, technical roads like that one. Luckily, Washington has no shortage of them.

At this point, I was beginning to understand what all the fuss was about with the Lancia 037. I was also starting to feel that this was indeed designed to be a rally car, and not just another street car trying to be a rally car—it was made to take any corner you throw at it. As you let off the throttle entering a corner, you can feel the weight move to the front of the car. Because of this, the steering feels entirely effortless, and the car ends up right where you want it to be. That doesn’t just happen every now and then… that was the feeling around every single corner, no matter the severity. An unsettling bump mid-corner? The 037 doesn’t bat an eye at it, it simply absorbs it and carries on through the corner, ready for the next. This type of handling combined with the linear power delivery instills some serious confidence in the person behind the wheel. There was never a point that I was worried about the car doing something unexpected, which allowed me to focus solely on driving and enjoying the car. 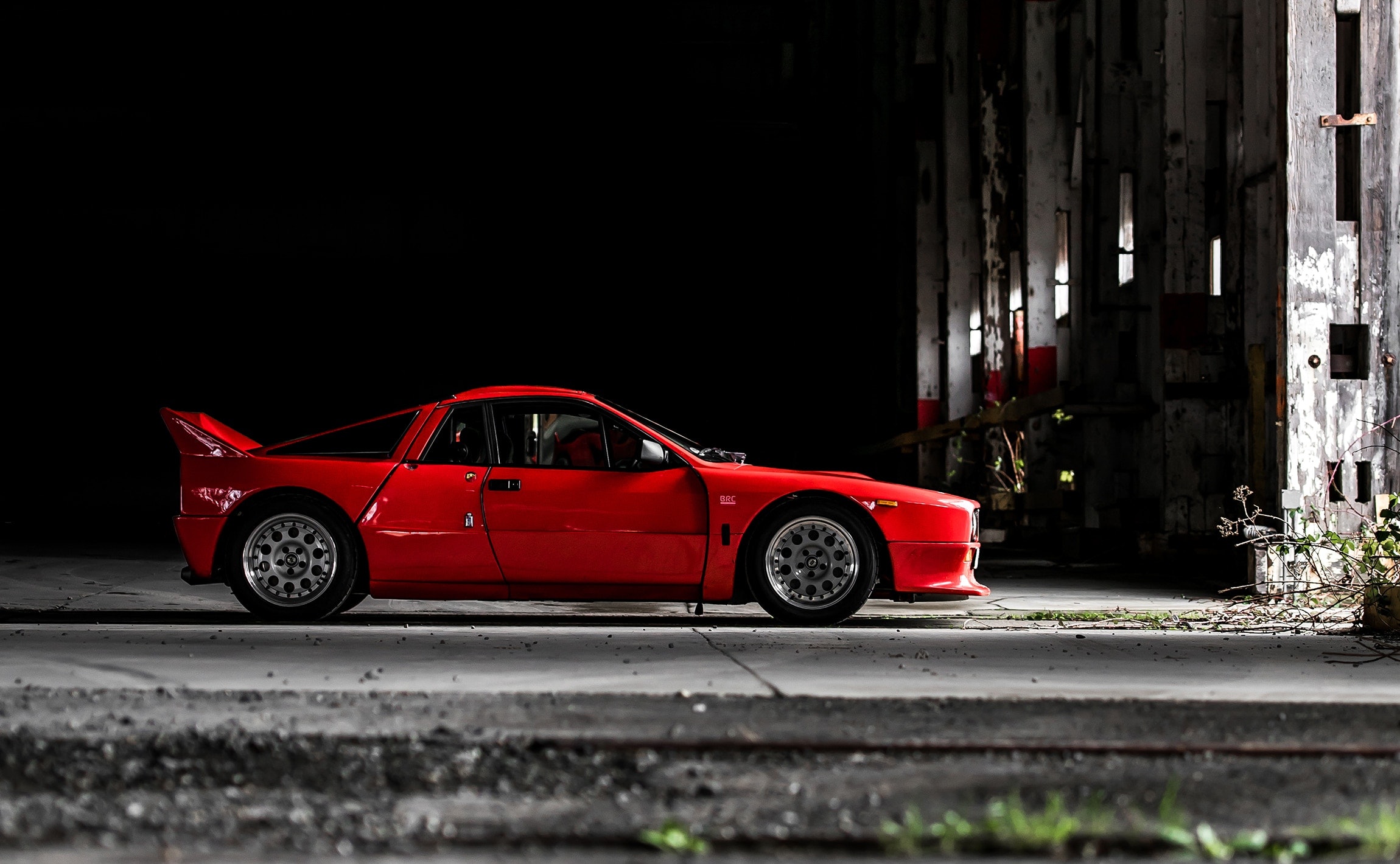 Prior to DirtFish Owner, Steve Rimmer, showing me his beautiful Lancia 037, I really didn’t know much about the car. Quite honestly, I probably would have been one of those people saying, “Sweet Ferrari!” However, after learning more about the car and having the absolute pleasure of driving it, I can safely say that I have fallen in love. If you ever have the opportunity to get up close to one of these Italian beauties, take your time. It will be worth it, I promise!