Nasser Al-Attiyah took victory on Rally Andalucía, beating X-raid Mini’s Carlos Sainz in the opening round of the FIA World Cup for Cross-Country Rallies, despite a two-minute penalty, as Mattias Ekström finished in the top five on his buggy debut.

Al-Attiyah, driving a privateer Toyota Hilux alongside regular co-driver Mathieu Baumel, was the dominant force all weekend, having won the 6.8-mile prologue stage on Wednesday by just over three seconds from Vaidotas Zala’s X-raid Mini All4 Racing.

The rally was contested over 772.9 competitive special-stage miles around the Villamartin base in the south of Spain and is the first of a seven-round World Cup season which includes the traditional pre-Dakar warm-up Rallye du Maroc in October.

As is the norm in the World Cup, crews get to choose their road order position for the first stage, and Al-Attiyah opted to run third on the road with Overdrive Racing’s Yazeed Al-Rajhi opening.

Al-Attiyah’s decision paid off as pre-event concerns of hanging dust failed to materialize on the opening 159-mile test – shortened before the final two waypoints on safety grounds – which took competitors from Arcos de la Frontera to the rally headquarters in Villamartin.

The Qatari declared himself “quite happy” following the first test, in which he beat Zala by just under 90 seconds, while road opener Al-Rajhi struggled to eighth.

Zala, in turn, lost time after catching Al-Rajhi on the stage but produced a strong end to the section to gap Sainz and navigator Lucas Cruz by 1m13s.

The performance of the opening stage, though, went to Erik van Loon, who stormed through from 18th on the road after missing a turn in the prologue in his Toyota Hilux to set the fifth-fastest time.

For Sainz, the start of the rally was a difficult return to four-wheel-drive machinery, having last driven it in 2011 and never in the Mini All4 Racing car.

The triple Dakar Rally winner needed time to build up confidence in the car and lamented that he had “not been driving the way I like” but fought back to win stage two and leapfrog Zala – who struggled with a “lack of attention” and “some mistakes” – for second by the end of the day.

Al-Attiyah limited the damage caused by opening the road and only shipped a minute to Sainz after briefly getting lost in the first half of the test. He backed up this stage with victory on the longest stage of the event, SS3, to further consolidate his advantage at the top to nearly five minutes over Sainz.

Zala’s fortunes took a turn for the worse on SS3 as the Lithuanian driver – alongside Portuguese co-driver Paulo Fiuza – lost half an hour after they were forced to replace a generator belt. 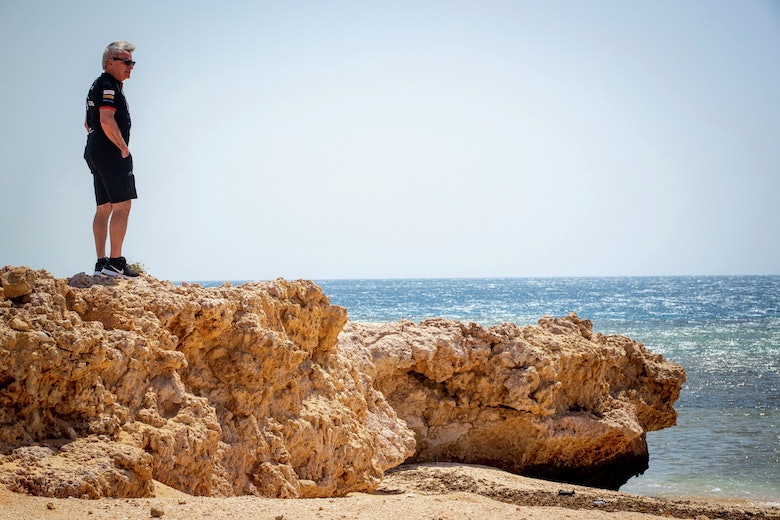 Al-Attiyah needed only to come through the fourth-and-final stage to claim the win, which he duly did, despite Sainz taking two minutes of him in the final stage. Al-Rajhi completed the podium in third.

Al-Attiyah did, however, find himelf in hot water after the finish as he was handed a two-minute time penalty for shortcutting a hairpin on the final stage. His victory margin over Sainz was cut to just 43-seconds in the end.

Just off the podium was the impressive van Loon, ahead of Ekström and co-driver Emil Bergkvist.

Having made his Dakar Rally debut in January in the Lightweight Prototype category, 2016 World Rallycross Champion Ekström was getting his first taste of T1 machinery this weekend aboard an X-raid Mini JCW buggy.

Ekström admitted to feeling his way in the early going and achieved his best stage time on SS3, where he finished fourth quickest despite co-driver Bergkvist struggling with an upset stomach.

The Swedish duo kept their noses clean on the final day to claim a well-deserved top-five finish, as other early contenders fell by the wayside.

As well as Zala, reigning FIA World Cup for Cross-Country Bajas champion Vladimir Vasilyev crashed out in his BMW on the second stage, having run as high as fourth following the opening test.

The experienced Spaniard, driving for X-raid in a Mini All4 Racing, made it to the finish alongside co-driver Dani Oliveras, having approached the rally on a learning exercise ahead of a potential full-time switch to cars in the future.

Cristína Gutierréz Herrero therefore claimed her first-ever T3 victory, secured on the final stage as de Mevius ground to a halt while leading.

Quintero had led the early running but was forced out of the reckoning with a gearbox failure before the third stage. That allowed de Mevius into an easy lead on his first outing in rally raid, but the Belgian also hit bad luck near the end.

X44 Extreme E driver Gutierréz, alongside co-driver François Cazalet, lost time on SS2 but consolidated second place on SS3 despite having to change the intercom following a water splash, and ensured they picked up the spoils after a clean final test as well as finishing sixth overall, among the T1 cars.

In the SSV class, Dakar runner-up Austin Jones beat Aron Domzala to victory in his Can-Am. The American took his first stage win on SS3 and with it, the overall lead ahead of the final day after “driving my ass off” in what he described as “a perfect day”.

Domzala, for his part, crashed on the opening stage and was largely out of victory contention, as Khalifa Al-Attiyah, brother of Nasser, took consecutive stage wins. Al-Attiyah, co-driven by Nasser’s former WRC navigator Xavier Panseri, hit trouble on SS3 however and lost around five minutes after a half-roll.