When it comes to experience in R5 and Rally2 cars, drivers don’t come much more decorated than Ole Christian Veiby. But the 24-year-old, as you might imagine, wants more.

Ever since his first rally in an R5 Škoda back in 2016, the Norwegian has started an incredible 73 events in either a Fabia, Citroën C3, Volkswagen Polo GTI or Hyundai i20 R5. Next weekend’s Rally Portugal will be his 74th.

The numbers that mean much more to Veiby however are two and 42.6. Last weekend’s Targa Florio Rally was the second event this Hyundai junior driver enjoyed in the i20 Coupe WRC – following an appearance on last season’s WRC finale at Monza – and 42.6 is the number of seconds Thierry Neuville edged him by over 57 miles.

“It was quite difficult to know what pace we would have before the weekend,” Veiby tells DirtFish.

“I didn’t have any test before the rally, obviously Thierry came straight from Croatia and he knows the car from before. And I’d also never driven the car on proper Tarmac before.

“Monza you can’t say it was a proper Tarmac rally, it was quite different from this one so it was difficult for me to have an opinion about where I should be on the pace but we were open minded. I got this opportunity and I think it was a good Tarmac rally let’s say for me, it wasn’t too difficult like Monza with all the cuts and gravel and slippy.

“OK the Tarmac in Targa Florio is quite slippery but still the rally’s quite smooth and flowing stages so I think that suits me well on my Tarmac driving.” 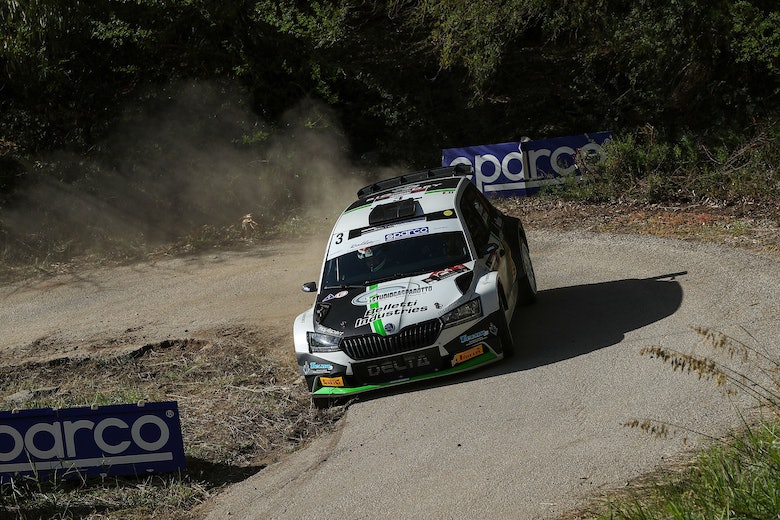 Along with co-driver changes, young drivers making the step into World Rally Cars – and impressing – has been a hot topic throughout the early phases of the 2021 rallying season.

And Veiby certainly did impress in Sicily.

Losing just an average of 0.539s per kilometer to Neuville – a man who’s started 29.5-times as many rallies in the i20 Coupe WRC as the Norwegian – is an impressive feat, and a marked improvement on December’s Monza Rally where Veiby lost an average of 1.5s per kilometer on the stages he completed without major errors.

So for sure it took some time to get used to the power, the aero and all the stuff that's different from the R5 Ole Christian Veiby

It’s even more impressive when you consider that Neuville was running the most up-to-date car with Veiby in a 2019-spec machine which, compared to the 2021 car, has “some different suspension” among other technical advances.

“We had a shakedown, did quite many laps on the shakedown but that was the first time in the car since Monza which was soon half a year ago,” Veiby adds, “so for sure it took some time to get used to the power, the aero and all the stuff that’s different from the R5.

“But yeah we did pretty well on the shakedown in the end so we were just over a second behind Thierry and I was happy with that. The rally also developed really, really [well] from my side. I took steps all the time.

Veiby was therefore left “really, really pleased” with how the rally went from his side, and confessed he could’ve finished even closer to Neuville had he kept up his initial rhythm.

“OK in the end, on the two last stages I was happy with what I’d done, I maybe started to think ‘OK let’s bring it home on this rally’ and I lost a bit more on those but that’s how it is on Tarmac,” he says.

“The time easily runs when you don’t hit those exact braking points and then the time goes a bit faster. But anyway, I was really, really pleased.”

There were plenty of lessons learned too. In Monza, Veiby reveals “I didn’t know the car and I’d never felt the limits of the car before” but last weekend on Targa Florio was “much easier” to arrive and “do well”.

It was definitely a bit easier this rally, but there's still a little way to go to be on Thierry's pace but I feel that I know where I can improve Ole Christian Veiby

“It’s quite special the WRC car with the aerodynamics and also the power,” explains Veiby. “Monza was so slippy and I was used to the lower power on the R5, I was maybe a bit too early on throttle sometimes.

“I had a lot of wheelspin and I didn’t get the traction I wanted. OK in Monza we ran probably a little too stiff [set-up on the] car which we softened up after a while and I think then it became much better.

“It was definitely a bit easier this rally, but there’s still a little way to go to be on Thierry’s pace but I feel that I know where I can improve. The most difficult for me this weekend was the faster corners, like fourth, fifth-gear corners; corners where you just have to brake a little bit, just one gear down.

“I didn’t carry enough speed through those corners because I was not used to the aerodynamics because it’s so different from the R5 because you have such higher grip in those higher speed corners.

Friend and former Hyundai factory driver Andreas Mikkelsen was on hand to help Veiby though, experience Veiby believes was invaluable to help him understand the “quite complicated” car which was the same specification as Mikkelsen drove in the WRC at the end of his Hyundai tenure.

So with all this new learning, when will we see Veiby and co-driver Jonas Andersson back in the WRC machine?

“I guessed that question would come up,” Veiby laughs.

“To be honest at the moment there are no further plans but I hope to be back in the car for sure and I think I might be. But at the moment I don’t know where and when. 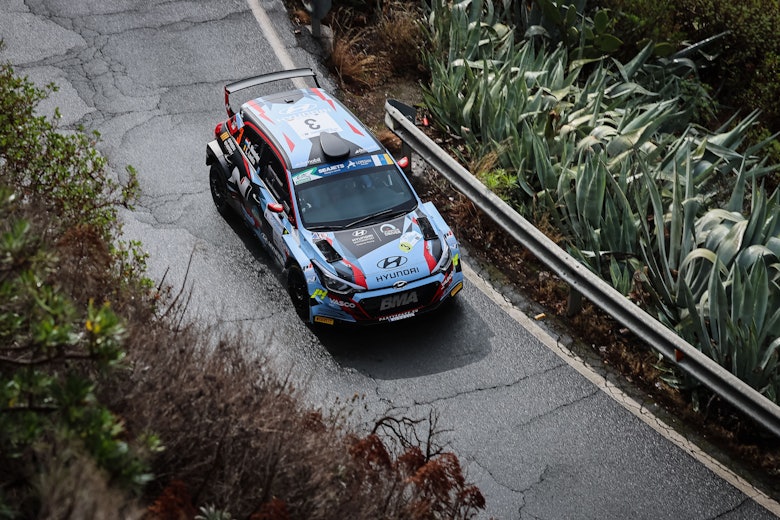 Who are Hyundai's Juniors?

“But you know the times these days, things change really quickly and you just get a call saying ‘can you come here and do this rally?’ and then OK you just have to take your helmet and go the next week.

“I hope and I think I might get the chance again and I think Andrea [Adamo], he was really happy with how I performed so for sure that helps as well!”

For now then, Veiby’s focus is on WRC2 and delivering the title for Hyundai. In a season that’s been packed with star quality, Hyundai has been a silent player thus far as it looks to give its drivers most of their events towards the end of the season when the all-new i20 N Rally2 will be homologated.

Success on Rally Portugal would be a major achievement given the quality and quantity of the field. Twelve cars will compete for WRC2 honors and, as Veiby puts it, “almost everyone can actually win the rally.

“The pace now, you have Andreas, you have [Esapekka] Lappi, [Teemu] Suninen will be there, you have many guys that have been competing in WRC and have a lot of experience and the speed is high,” he continues.

“We had some new parts on the car that we were able to test during the rally and now we are a little bit prepared before our testing this weekend in Portugal so we’ll be able to have a good package for sure. But the guys, they are strong.”

It’s not just Veiby’s Škoda, Citroën, M-Sport or VW rivals that will be strong though, there’s plenty of competition from within Hyundai’s own service tent.

It’s an interesting subplot that adds that little bit of extra spice to an already hot season. No other team has as rich a talent pool as Hyundai with juniors like reigning WRC3 champion Jari Huttunen and, of course, Oliver Solberg.

Understandably given his surname and the sublime performance he turned in on his World Rally Car debut in the Arctic Circle, Solberg’s is the name on everybody’s lips while Huttunen’s outrageous 2020 form has boosted his profile and reputation too.

So what of Veiby? The somewhat forgotten man from Hyundai’s impressive young roster. Does he stand any chance of progressing and forcing the spotlight to shine on him? Has the acquisition of Solberg all-but buried any hopes of a WRC graduation?

Solberg joining the team could have massively destabilized a lesser character, but Veiby sees working alongside the 19-year-old as an opportunity instead of a threat.

“I think it’s really, really good that we now have Oliver in the team,” he says. “For sure he and also his father, he has a lot of experience and it’s been really good to have him now in the team for the development of the new car and also the old one, it’s improving a lot since they came into the team.

“But yeah me and Oliver, we speak the same language, we are coming along good together and it’s really nice to have someone like that in the team so I’m really looking forward to Portugal now to really work together for the first time in the same team.”

All Veiby can do is keep making his point. He is the first one to admit that his 2020 season – where he was fast but was plagued with issues and failed to register a victory – was “for sure quite difficult”, but 2021 has already “started off a bit better” and can only improve with a new car between his fingertips.

Ultimately, if his Targa Florio form continues and he can punch above his weight in a star-studded WRC2 battle this year, Veiby’s big break may not be as far away as some might think. He’s certainly in the right environment to make it happen.

“I think it’s really good times,” he surmises. “There is no secret that we look forward to getting the new car but the Hyundai family is a really good place to be and you see this weekend I got the opportunity to drive the WRC car.

“And to be able to take that step up to WRC, which for sure is my goal, to be there as soon as possible, to be able to do that step it’s important to have some chances and be a little bit prepared for what’s coming.

“You have something to work for. There is no secret I want to be back in the WRC car now once I’ve driven it, it’s a fantastic car, somehow you’re getting more focused to do the extra little hard work to maybe be able to get there.”