Al-Rajhi’s penalty, to the tune of two minutes due to speeding in the neutralization zone, dropped him and navigator Michael Orr dropped four places to fifth and 1m46s behind the new stage winner Al-Attiyah after initially setting the pace by 14 seconds.

Bahrain Raid Xtreme’s Sébastien Loeb therefore inherited second on the stage, 25s off the pace while Audi’s Carlos Sainz was third, despite the latter breaking a driveshaft in the final 86 miles.

The longest stage of the rally at 288.76 miles took crews from Al Qaisumah to the Saudi capital of Riyadh and provided the most competitive special of the event so far, with four cars in the hunt for stage victory.

The unluckiest of the likely contenders was Al-Attiyah’s TGR team-mate Henk Lategan who was forced to stop with mechanical trouble, while Carlos Sainz’s efforts to give Audi its second successive stage win tailed off in the closing stages.

Not only was this the longest stage but it was also high paced as winding rocky tracks typified the beginning and end of the route. There was also the added challenge of negotiating several wadis (riverbeds) which had filled with water after the heavy rainfall which hit the Middle East region this week.

Following a sensational drive on Tuesday’s third stage, Lategan again led Toyota’s charge from second on the road and took the lead of the special 74 miles, some 40s clear of Audi’s Sainz.

Lategan extended his margin at the front to over 2m30s before his GR Hilux DKR T1+ broke a rear hub, forcing the South African to stop before the waypoint around 195 miles. 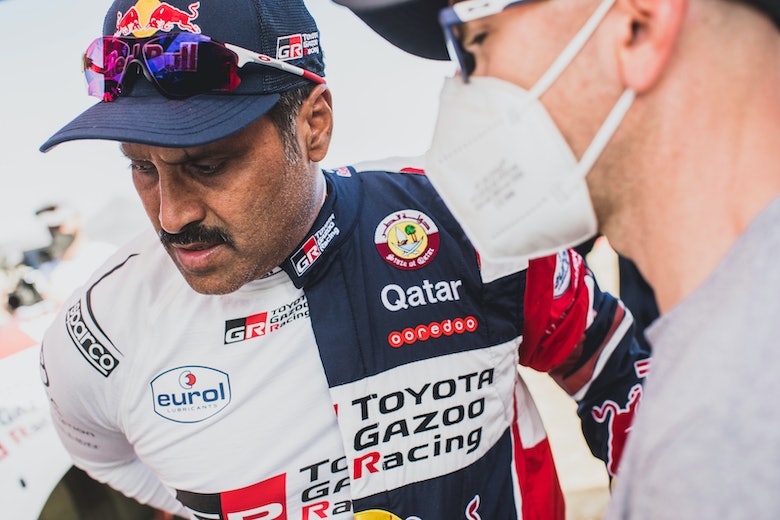 That left Sainz somewhat in control of the stage, albeit temporarily as the triple Dakar winner held a slender advantage over current overall leader Al-Attiyah of just 1m20s.

The pair then came under threat from Al-Rajhi, who produced a storming performance to close the gap to Sainz before moving ahead before the 259-mile marker.

He gapped Sainz by 29s, but Al-Attiyah was now a second clear of the Audi and Al-Rajhi’s nearest challenger for the remaining two waypoints.

Al-Rajhi just clung on to reach the finish, 14s ahead of Al-Attiyah while Sainz slipped behind a charging Sébastien Loeb to end up fourth quickest, 1m06s off the pace of Al-Rajhi, pre-penalty.

Another crew to enjoy a strong stage was the X-raid Mini John Cooper Works Rally of Yasir Seaidan and Alex Kuzmich. The local driver dropped time early on the stage but fought back to carve minutes out of those in front to emerge just under two minutes off the pace.

The other X-raid Mini entry of Kuba Przygónski and Timo Gottschalk (in the JCW buggy) was seventh, 5m24s down on Al-Rajhi and just over a minute behind Giniel de Villiers’ Toyota Gazoo Racing Hilux.

Lategan was not the only driver to hit trouble during the stage, with Nani Roma suffering a roll in his Bahrain Raid Xtreme Hunter. Benediktas Vanagas had a scary barrel roll (above) in a privately entered Hilux, the car bottoming out on a series of rolling dunes and going end over end. Both Vanagas and his navigator Filipe Palmeiro emerged unscathed.

For Audi, it was another difficult day for 14-time winner Stéphane Peterhansel, who was halted early on the stage with a broken shock absorber which in turn damaged the radiator and intercooler, requiring the assistance truck to remedy.

Team-mate Mattias Ekström also struck trouble in the second RS Q e-tron, breaking a rear damper about 43 miles into the stage, forcing him to nurse his car to the end.

In the overall, Al-Attiyah continues to lead the way with a healthy margin of 38 minutes from Loeb, with Al-Rajhi now moving into third place, a further 11 minutes adrift. De Villiers is fourth, two seconds behind Al-Rajhi, while the big loser was Alvarez who has slipped to fifth ahead of VRT Team’s Vladimir Vasilyev.

The Can-Am Factory driver trailed de Oliveira by just 10s at the end of the stage and finished 49s clear of Michał Goczał Cobant-Energyland entry.

Brother Marek Goczał had led the way midway through the stage but dropped over seven minutes in the final section, leaving him fourth at the finish, 6m43s off the pace.

Bouncing back from a puncture during the third stage, de Oliveira started fifth on the road and made the most of the tracks in front of him to run second to Goczał before hitting the front.

Jones’ lead stands at 5m13 over de Oliveira, with Michał Goczał a further nine minites adrift.
Aron Domzala should have been in the hunt for the stage win, having led the at the midway point but fell out of contention after a heavy barrel-roll, which required the assistance truck.

The American, no longer challenging for the overall victory, says he is “just looking to win more stages” for the remainder of the rally, while current leader Francisco “Chaleco” Lopez Contardo extended his margin at the top of the class with third on the stage.

Cristina Gutierréz nearly made it three Red Bull OT3s in the top three but dropped five minutes in the latter part of the stage to end up fourth.

Has Ogier had enough preparation for the Monte?