After breaking a wheel hub on stage six, Saudi driver Al Rajhi arguably had the best road conditions for the 333km test which took crews from the revised overnight base of Riyadh to the original location for Friday’s bivouac, Al Duwadimi.

Zala produced a strong final section of the stage to finish second, ahead of another Hunter T1+ of GCK Motorsport’s Guerlain Chicherit.

Rally leader Nasser Al-Attiyah still holds a healthy margin in the overall classification, having only dropped around six minutes to Toyota Gazoo Racing team-mate Henk Lategan, but could only manage 10th on the stage.

Due to adverse weather during the week, the route was altered by the event organizers, meaning the trip back north from the Saudi capital to Al Duwadimi became a de facto Marathon Stage.

Unlike the regular Marathon Stages, of which two will feature next week in the famous Empty Quarter, an assistance zone will be made available for a window of two hours once crews reach a dedicated secured enclosure near Al Duwadimi.

With sandy tracks and “complicated navigation” on the cards from the off, Chicherit led the early going at the first waypoint, edging out Al Rajhi and the Audi RS Q e-tron E2 of Mattias Ekström, just four seconds splitting the trio.

Al Rajhi briefly hit the front but Chicherit consolidated his lead of 15s over Ekström after the Saudi local lost some time. 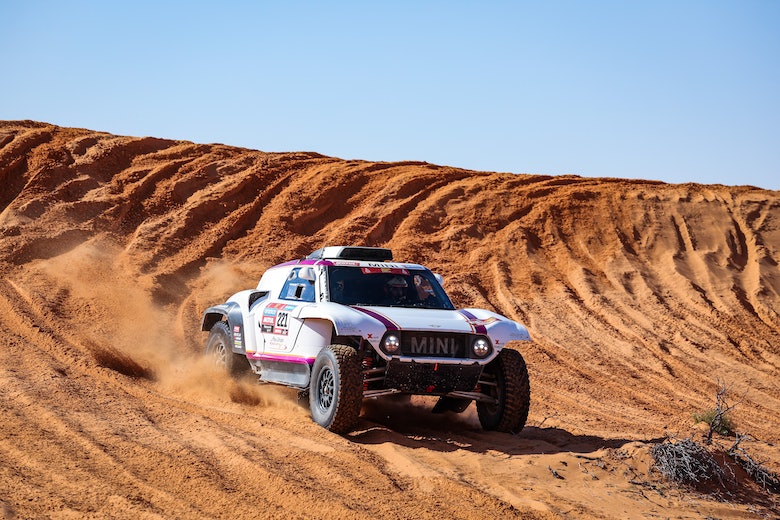 WRC TO RALLY-RAID: HOW HARD IS IT?

At the halfway marker, just 24s covered the top four crews, but Ekström – despite moving ahead on the stage classification at the 196km point – plummeted down the order after mechanical issues.

The Audi is believed to have had multiple parts changed, with Sainz sacrificing his own time to donate two spare wishbones, a shocker and transmission for the hapless Swede.

“I had one of those days where you say: ‘I want to push’ and the stage was really nice to drive but then just after the neutralization on the long straight, I drove over a stone and got a puncture, which broke the suspension.

“Lucas [Cruz] is a very good mechanic and we were able to disassemble the car but we lost over three hours. Until that point, we were going well.”

That allowed Al Rajhi to move back to the top of the order by the 244km point, pulling out a margin over Chicherit of 51s before ballooning it to over three minutes by the penultimate waypoint.

In the end, Chicherit lost a chunk of time and fell 10 minutes off the pace and two behind Hunter stablemate Zala.

For Zala, second place was just reward for what’s been a tough Dakar so far. The Lithuanian, who last won a stage in a privateer Mini on the 2020 Prologue, finished 10th on day one before being penalized 36 hours after failing to reach the end of stage two.

Seven seconds further back was Lategan, while Mathieu Serradori was seventh fastest.

The sole remaining Bahrain Raid Xtreme Hunter of Sébastien Loeb was over 16 minutes down on Al Rajhi’s best time.

In the overall standings, Al-Attiyah’s lead has been shaved marginally by Lategan after stage seven, but the defending winner – alongside navigator Mathieu Baumel – still heads his team-mate by more than an hour.

Overdrive Racing’s Lucas Moraes continues his excellent Dakar debut with third overall, some way ahead of De Villiers, while Loeb moves back into the top five after Ekström’s mechanical strife.

De Oliveira had come into the Riyadh-Al Duwadimi test with a margin of over 20 minutes but was forced to stop twice to carry out repairs to his South Racing machine.

The Brazilian stopped for around 20 minutes before the 162km marker before losing a further 15 minutes at the 300km point. He and navigator Maykel Justo lost 40 minutes to stage winner Baciuška.

Having been penalized 15 minutes for a missed waypoint on stage one, Baciuška now holds a lead of 5m42s over Energyland Rally Team’s Marek Goczał, with Eryk Goczał a further 40s back in third.

De Oliveira dropped to sixth overall, a full 20m28s off the lead.

Guthrie Jr hit the front at the third waypoint and quickly established a lead of over a minute on X-raid’s João Ferreira, who finished an excellent fourth in his Yamaha YXZ 1000 Turbo R.

After suffering reliability issues and his fair share of horrible luck so far this Dakar, three-time winner in the T3 class Francisco Chaleco López Contardo was a morale-boosting second quickest, 1m45s adrift of Guthrie Jr.

De Mevius still leads the overall classification from Jones, who is 8m29s behind, while Seth Quintero remains third in the second Red Bull Off-Road Can-Am, albeit more than an hour back.

Meanwhile, there was a scare for Cristina Gutiérrez Herrero, who was late to start the stage after her Red Bull Can-Am Factory Team mechanics crashed her car before leaving for the liaison route.

“There was a little mishap with my mechanic,” Gutiérrez Herrero said on social media. “I don’t know how many days it has been without sleep and fixing the car, and he had a bad moment so we had to repair the car which was the reason why I was late to join the stage.

“Despite this and all the problems we’ve had so far, I enjoyed the stage and slowly by surely, starting to see the light at the end of the tunnel.”

Gutiérrez Herrero was eighth fastest on the stage and remains in fifth overall.

WRC to rally-raid: How hard is it?