Giniel de Villiers led a Toyota Gazoo Racing domination on the ninth day of the Dakar Rally with his first stage win of the event as Nasser Al-Attiyah extended his overall lead once more.

The 2009 winner fought tooth-and-nail with team-mate Henk Lategan in a highly competitive loop around the southern town of Wadi Ad-Dawasir, eventually coming out on top by nine seconds at the finish.

Despite dropping more than a minute early on, Al-Attiyah finished third on the fast 178-mile stage and increased his margin over Bahrain Raid Xtreme’s Sébastien Loeb in the overall by 1m07s.

Considerably shorter than the previous stage, the Wadi Ad Dawasir presented a much faster-paced special, with the top five at the finish covered by just over two minutes.

Lategan led the way at the opening waypoint after 24 miles despite stopping to change a puncture, with Al-Attiyah just nine seconds adrift of his Toyota team-mate. Behind Lategan, de Villiers, Audi’s Stéphane Peterhansel and the Century of Christiaan Visser and GCK’s Guerlain Chicherit were split by five seconds, with Loeb 24s back in ninth.

De Villiers then moved in front at the third waypoint, with Loeb 10s in arrears and Lategan another six seconds back.

Al-Attiyah, meanwhile, had dropped over a minute before the second waypoint after encountering issues, but the Qatari made good inroads to move back 51s off de Villiers’ pace. 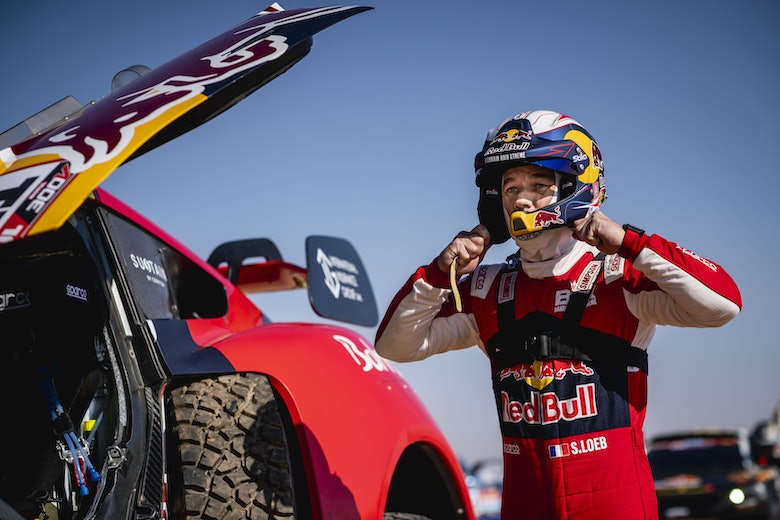 The middle of the stage was predicted to throw up navigational challenges and puncture threats as the route negotiated a series of wadis (riverbeds) and valleys and it was during this section that Loeb and navigator Fabian Lurquin coughed up nearly two minutes, falling out of the lead battle.

Peterhansel also lost time, but before the third waypoint, dropping the Audi RS Q e-tron over three minutes away from the lead. He was later handed a two-minute time penalty for deploying more electrical power than is allowed as per the regulations.

With Loeb and Peterhansel out of the equation for stage victory, the battle for the top spot between Lategan and de Villiers intensified with the latter’s lead coming down from 16s to just five seconds approaching the 124-mile marker.

That gap opened and closed once more before the finish, with Lategan ending up just nine seconds adrift of his more experienced team-mate, who claimed the 18th stage win of his Dakar career.

De Villiers’ stage win comes after a troubled Dakar for the South African who received a pair of time penalties during the opening week for separate incidents involving a biker. His second penalty, a five-hour punishment, was subsequently overturned but a loose oil pipe in Sunday’s seventh stage dropped him and navigator Dennis Murphy out of the running for a podium finish.

Outside of the top three on the stage, Ekström backed up his maiden Dakar stage victory on Monday with another fine performance in fourth, four seconds clear of Loeb, while Carlos Sainz finished sixth.

The other SRT Century of Brian Baragwanath and Leonard Cremer was ninth, with Nani Roma completing the top 10 for BRX.

In the overall standings, Al-Attiyah continues to lead heading into the final three stages of the event from Loeb, some 39m05s clear.

Overdrive Racing’s Yazeed Al Rajhi is a comfortable third, 38 minutes ahead of the second BRX Hunter of Orlando Terranova and Dani Oliveras Carreras.

De Villiers is up to fifth, ahead of X-raid Mini’s Kuba Przygónski, while the VRT Racing BMWX X3 of Vladimir Vasilyev consolidates fifth ahead of Martin Prokop’s Ford Raptor RS Cross-Country.

Ekström is the best of the Audis in 11th, just eight minutes behind Serradori.

Austin Jones heads into the final three stages of the Dakar with an enhanced lead in the overall side-by-side standings after trouble for his Can-Am Factory South Racing team-mate Gerard Farres Guell.

Farres Guell, who had closed to within six minutes of Jones on the previous stage, was ahead following the opening two waypoints but dropped over eight minutes to stage winner Marek Goczał by the end.

He’s now 13 minutes behind Jones in the overall classification and just three ahead of Michał Goczał who continued his recovery in fine style with the third quickest time.

Having lost over half an hour on stage eight with a broken turbo hose, Rodrigo Luppi de Oliveira finished the stage fourth fastest, with Aron Domzala and Molly Taylor in close company completing the top six.

Meanwhile in the T3 Lightweight Prototype class, Seth Quintero was dominant once more and maintains his stage win record quest for the Red Bull Off-Road Junior USA Team. He finished 2m20s ahead of Cristina Gutierréz as the two team-mates battled hard throughout the stage, exchanging turns at the top of the leaderboard.

Quintero’s stage wins are not just for individual satisfaction, as each fastest time earns points towards the World Rally Raid Championship, with five points awarded for the win.

“With all these stage wins, I believe we get around five points for the W2RC, but we’re really just trying to get as many points as we can,” Quintero said.

“We’re not in it for the overall and the overall will be worth fifty points, so we definitely have some points to make up and we’ll just try to keep grabbing them. We’re planning on fighting the whole year for the T3 title.”

EKS South Racing’s Francisco Lopez Contardo was five-and-a-half minutes off the pace in third but looks a sure bet to claim his third Dakar victory on Friday, barring any late-event misfortune.

M-Sport wants podiums from Greensmith in 2022