The start to the inaugural season of Extreme E in Al-Ula may have been pushed back to April, but some of its drivers gained valuable experience of the Saudi Arabian desert this month on the 43rd edition of the Dakar Rally.

Five drivers took part in the 12-day rally across three categories, with varying success. Not all of them made it to the finish in the traditional method, with several rookies who didn’t make it back to the bivouac in the allotted time continuing to the end of the rally as ‘Dakar Experience’ . They weren’t included in the overall standings and their stage times didn’t count but they were allowed to repair their car and complete all the stages as normal.

DirtFish looks into how they got on in arguably the toughest off-road rally in the world.

Carlos Sainz (3rd overall and in the Car category)

The reigning Dakar winner had high hopes of defending his crown and with good reason too. The lightweight rear-wheel-drive X-raid Mini JCW had the edge over its heavier 4×4 Toyota rivals. Added to that was Sainz’s victorious performance on the second Ha’il Baja in December, albeit running the test car instead of the race version of his JCW.

Unfortunately for Sainz, things got off badly in the road order-setting prologue as a puncture left him 28th, ironically with a far favorable road position for the first proper stage from Jeddah to Bisha, which he and co-driver Lucas Cruz won.

Sainz and team-mate Stéphane Peterhansel had a ding-dong battle for stage honors on the 172-mile test.

As road opener on stage two, Sainz naturally suffered and lost the lead to Peterhansel, slipping six minutes behind. But this was just a precursor to a pair of days where the Spaniard’s rally unravelled.

From then on, Sainz seemed to be driving more in hope than in expectation as Toyota’s Nasser Al-Attiyah and Peterhansel duked it out for the win.

Sainz did finish on the podium in third place, far from a bad result but one in which he found himself over an hour adrift of Peterhansel by the finish.

Just a couple of months before the Dakar, Laia Sanz didn’t even know if she would be able to compete in Saudi Arabia, owing to her continued battle with Lyme disease. But the 13-time Women’s Trials World Champion, team-mate to Sainz in his Acciona XE team, ended up being the best placed female rider in the bike category and finished a creditable 17th place in one of the most competitive fields in history.

Sanz’s rally got off to a tricky start, getting lost and dropping 15 minutes on the opening stage, but the rhythm gradually came and Sanz began to generate far more confidence on her Gas Gas bike.

Due to the pre-event illness, Sanz was hampered by a lack of testing, and this came to bear on stage six as she began to feel the physicality of the rally ahead of the rest day in Ha’il.

Stage seven proved to be the most painful, as Sanz struggled with wrist pain caused by tendonitis – a common symptom of Lyme disease – forcing her to ride slowly and ship more time in the general classification.

Despite this, Sanz successfully made it to the finish of the Dakar for the 11th straight year, an impressive feat for any competitor but even more so considering Sanz’s arduous preparation for one of the toughest events in the world.

Abt Cupra XE driver Ekström is more of a conventional stage rallying guy, but he’s also one of the smartest, best prepared drivers out there. So, his late decision to enter Dakar with the X-raid run Yamaha Lightweight Prototype was a shrewd call.

It made perfect sense to get an idea of the conditions on a similar surface in the same country as the delayed opening Extreme E round, and he partnered with fellow Swede and rally driver Emil Bergkvist with the aim of learning. Winning, while desirable, was in effect an afterthought. It was all part of the process, and what better way to learn than to go through difficult moments and come out the other side.

Ekström didn’t pick up a trophy for completing all the stages, a series of mechanical issues prevented that from happening, but he did manage to gain valuable experience of off-road action.

Engine problems and a substantial oil leak set Ekström back at the start of the second week, leaving him to compete in the non-competitive Dakar Experience, and further suspension troubles threatened to dampen the Swede’s usual positive demeanour.

But there were good days too, with quickening pace allowing Ekström to bag a couple of top-three stage times before losing drive on the final day of the rally, forcing him to call his assistance truck before reaching the finish.

One half of the line-up at Formula 1 World Champion Lewis Hamilton’s X44 team, Gutierrez was another who, two months before the Dakar started, didn’t think she would be gracing the start podium at the King Abdullah Stadium in Jeddah.

A lack of budget meant the experienced Dakar competitor – the first Spanish woman to finish the event in the car category – was left facing a nervous wait as to whether she would land a drive. But along came Red Bull’s Off-Road Junior team in the side-by-side category and Gutierrez formed a formidable trio alongside Mitch Guthrie and up-and-coming US teenage star Seth Quintero.

Gutierrez showcased her prowess behind the wheel by storming to victory in the opening stage of the event in her OT3 by Overdrive Racing machine, becoming the first female winner of a Dakar stage since Jutta Kleinschmidt did so in 2005.

She was beaten by Quintero on stage two but still maintained the T3 class lead for another two stages before dropping almost an hour due to a mechanical issue got her stuck in the dunes on the third stage.

Back in the swing of things after the rest day, Gutierrez’s pace was strong but bad luck and mechanical gremlins struck again as gearbox trouble cost her and co-driver François Cazalet a chance to even start stage eight.

That forced her into the Dakar Experience, meaning Gutierrez could complete another Dakar and make the finish on Friday, despite not appearing in the overall classification.

Where to start with the king’s Dakar return? In his first rally raid event since 2019, and his maiden outing with his new Prodrive-run Bahrain Raid Xtreme team alongside trusty co-driver Daniel Elena, Loeb had talked up his chances of a strong result. And this could well have been possible if a series of punctures throughout the 12-day rally hadn’t blighted his chances from the off.

Three punctures on stage one cost Loeb – who will partner Gutierrez at X44 – over 22 minutes to stage winner Sainz and things got decidedly worse throughout the opening week before the rest day.

Loeb was given a five-minute penalty after being caught speeding in a controlled zone after his onboard GPS alarm failed to sound. Loeb called the decision from the stewards “incompetence” but was forced to suck up the punishment and soldier on.

Which he did until stage six, where he spent 14 hours in the desert after breaking a left-rear suspension arm, necessitating an eight-hour wait for his assistance truck to bring the wrong replacement part.

After arriving back at the bivouac at close to 2am and sleeping for the bulk of the rest day, Loeb’s nightmare rally got worse with more punctures and navigational errors in the second week. His rally finally came to an end after two more tire problems – without a spare which was given to team-mate Nani Roma – and his assistance truck suffering a mechanical drama of its own.

It was more than a trying event for Loeb, who was forced to sacrifice his own chances as Roma secured a morale-boosting fifth place in the second Hunter BRX1 4×4. 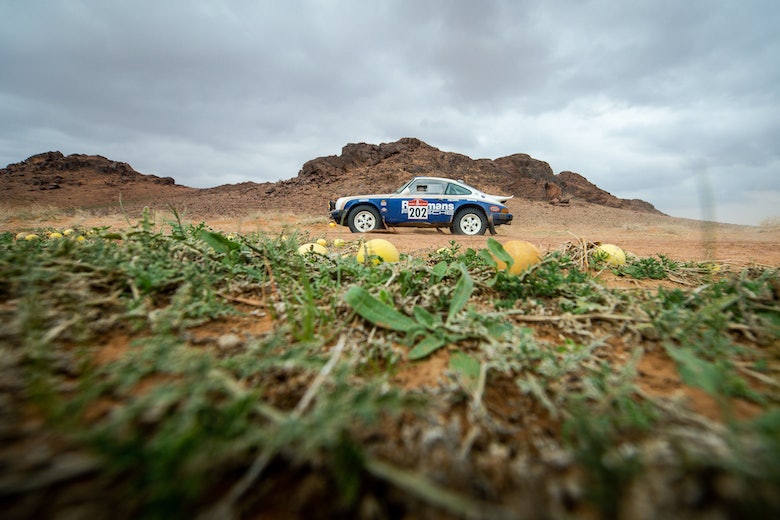 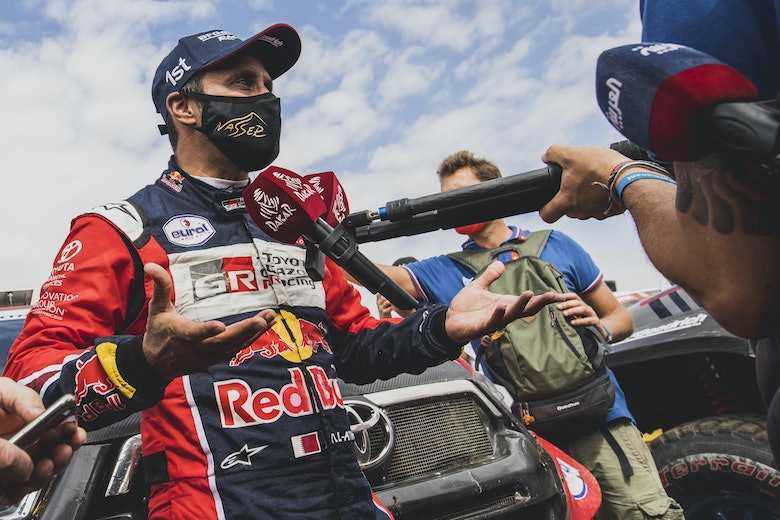 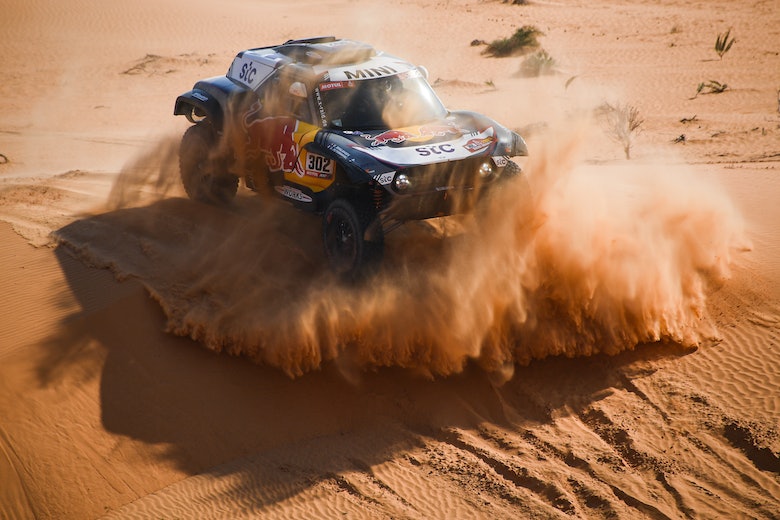