Henk Lategan secured his first ever Dakar Rally stage win on the 2022 event’s fifth stage, while Toyota team-mate Nasser Al-Attiyah remains clear of the field by over half an hour.

“It was a mad day, a proper Dakar day,” said Lategan.

“We actually stopped on a dune and Brett was trying to override the fuel pressure while I strapped the door closed again, and then we had another puncture which forced us to get the tire which was under the broken door which meant cutting all the tire straps again!”

The Overdrive Racing Toyota of Lucio Alvarez was third, just 12s adrift of Loeb, while the SRT Racing Century CR 6 of Matthieu Serradori and Loïc Minaudier put in their best showing of the rally so far with fourth.

Nasser Al-Attiyah now leads the overall classification from Loeb by 35m10s despite losing the best part of three minutes to the Frenchman on the stage. 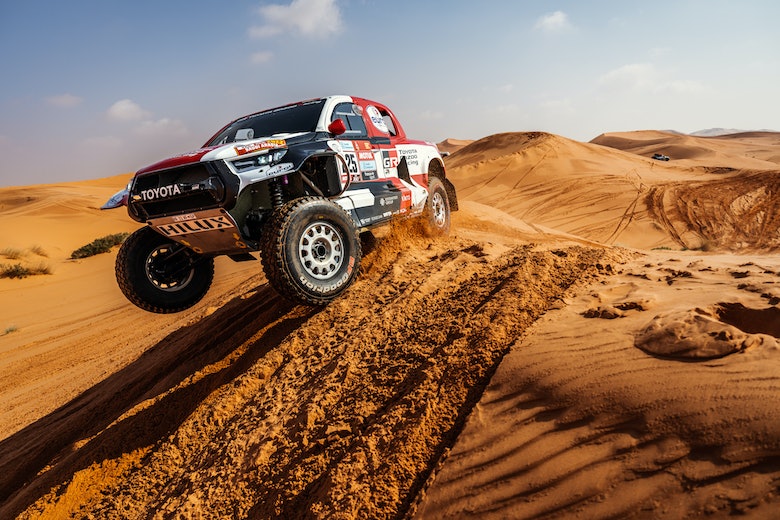 The overlooked drive of the Dakar so far

Road order was crucial to this 244-mile stage as, uniquely, the car and bike competitors each had their own separate special stage meaning the cars were the first to carve tracks in the soft sand sections around 43 miles into the test, which again required precise navigation from the crews.

Having inherited victory on Wednesday’s fourth stage from fellow Toyota Hilux driver Yazeed Al Rajhi, current leader Al-Attiyah predicted that opening the road would leave him vulnerable to those behind, and so it proved to be.

“We tried to set a high pace, but our plan was not having to open [on Thursday] because there will be no bikes and, therefore, no tracks,” he said on Wednesday. “But, even if we falter a bit in these conditions, it will put us in a favourable position for the next day.”

Second to Al-Attiyah on stage four, Loeb was in no doubt as to the benefit of finishing behind Al-Attiyah on the longest stage of the rally; that compromise leaving him in a more favorable position for the penultimate test before the rest day in Riyadh.

“Finishing behind Nasser today to start behind him tomorrow is a good trade-off. There won’t be any bikes at the front, so the first cars will regroup, so it’s not bad at all,” the nine-time WRC champion said.

As first and second on the road, both Al-Attiyah and Loeb did suffer as expected early on during the stage, with the former losing nearly seven minutes by the third waypoint at 75 miles. Loeb, by contrast, dropped a shade under five minutes but an issue cost him a further three minutes by the next waypoint.

Indeed, until the penultimate waypoint, it seemed for all money that Loeb stood very little chance of winning the stage. But the nine-time WRC champion recouped five minutes in the final portion of the loop to emerge as Lategan’s closest challenger.

Al-Attiyah salvaged eighth on the stage, helped a little by more issues for Audi.

Having battled Lategan for the top spot early on, Stéphane Peterhansel sacrificed the stage win – and his own suspension – to help out team-mate Carlos Sainz who broke a damper just after the fourth waypoint.

He lost an hour, with Peterhansel losing more as he waited for his assistance truck to replace the suspension he’d just given up.

With Peterhansel out of the way, Lategan and the third Audi of Mattias Ekström went toe-to-toe, with just one second splitting the pair at the fifth waypoint until Ekström dropped around three minutes.

In the overall, Alvarez moves back into third place at the expense of Al Rajhi who lost over 20 minutes with issues on the stage, while the erstwhile fourth placed car of Giniel de Villiers is now well outside of the top 10 after receiving a five-hour penalty for a second incident involving a motorbike rider on Wednesday. 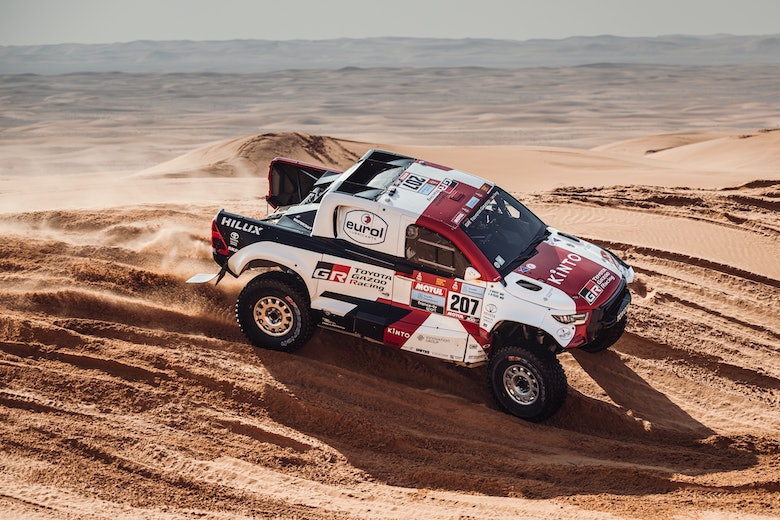 That has elevated the VRT BMW X3 of Vladimir Vasilyev to fifth, ahead of the X-raid Mini JCW buggies of Kuba Przygónski and Sebastian Halpern.

Orlando Terranova is eighth, with Serradori and Christiaan Visser rounding out the top 10.

Luppi, driving for South Racing, did battle with Snag Racing’s Sergey Kariakin throughout, with the latter leading the way up until the sixth waypoint, whereafter de Oliveira took charge.

As for Jones, the South Racing Can-Am Factory Team driver started third on the road, one place behind de Oliveira but couldn’t quite match the pace of those in front and shipped a chunk of time at waypoint four.

Ex-rallycross driver Rokas Baciuska set the fifth fastest time, some 11 minutes behind de Oliveira as he continues his foray into rally raid.

In the T3 Lightweight Prototypes, it was an all too familiar story as Seth Quintero utterly dominated the stage again, beating Sebastian Eriksson by a whopping 8m03s. The Californian has openly admitted that he is targeting as many stage wins as possible now he is out of the fight for overall victory and put his rivals to the sword in a superlative performance.

Meanwhile, Francisco “Chaleco” Lopez Contardo continues to show his own class and composure by finishing third on the stage, eight minutes behind, and maintain a healthy lead at the top of the standings over Eriksson, 20 minutes in front.