Siblings competing against each other in rallying is nothing new but, for Aliyyah and Yasmeen Koloc, their story is rather different. They’re twins.

Born and raised in Dubai to a Czech former truck racing father and a Seychellois-Sudanese mother, the sisters are contesting the Dakar Rally in Saudi Arabia this month for the first time.

At just 18 years-old, they’ve had to bide their time before entering the toughest rally raid event in the world, having been below the minimum age limit until now.

Indeed, the Dakar has been a target for the Kolocs ever since they began their motorsport journeys at the age of 15 and 16 respectively, having previously held ambitions to become professional tennis players.

Promising careers in the sport beckoned for Aliyyah and Yasmeen, inspired by the hugely successful Williams sisters (Venus and Serena), but injury forced both into premature retirement.

“We were both playing tennis from about the age of four or five,” recounts Aliyyah. “So that was our passion at the time, and I think we were at a good level, competing. We grew up mostly around racing because of our dad [Martin] but I never really got into it because I was doing tennis.

“Then I got a knee injury and had to have surgery, which meant I had to stop playing. I was still growing, and I don’t think the joints were able to properly recover to the point where I could continue.”

Injury also curtailed Yasmeen’s aspirations of making it in tennis a year later, as a wrist fracture became increasingly problematic.

The twins then turned their attention to the vastly contrasting environment of motorsport but, having spent much of their childhood around cars and in paddocks, the transition wasn’t as abnormal as one might think.

“Because we used to go to the tracks when our dad was racing, it didn’t feel strange to give motorsport a try,” says Yasmeen. “And I loved it straight away. Aliyyah started a year before me, and I had gone to see her race and then I decided to give it a go too.”

Although both sisters started out in rather conventional fashion in the spec Renault Clio Cup touring car, their first experiences of motorsport could not have been more extreme. Aliyyah cut her teeth at the wheel of a truck, while Yasmeen drove a Formula 4 single-seater before entering the hatchback championship.

From there, it’s been a case of no looking back for the Koloc twins as they embark on their dream to reach the top of the cross-country scene.

“That’s the aim,” says Yasmeen. “I feel more at home rallying, and I want to do everything I can to be the best and win titles. Motorsport has always been part of my life and when I had to make the switch from tennis to racing, it was actually a really positive transition because I was really happy to try a new sport and new skills.

“And because Aliyyah was training, I would train as well, and it was just a fun way to stay competitive but try something different.”

It quickly becomes clear that neither Yasmeen nor Aliyyah have followed the traditional path to motorsport’s top table.

Save for a handful of sessions in a go-kart, Aliyyah dove straight into Clio racing before entering the European Truck Racing Championship at the age of 16, finishing eighth on her debut and coming 14th in the standings.

For 2021 she contested the French series and came fifth overall in the standings, then for 2022 combined her burgeoning off-road career with campaigns in the ultra-competitive French GT4 series and the NASCAR Euro Series. All by the age of 18.

“NASCAR has been very chaotic this year! It was a really good experience for me because they are big, heavy cars with no assistance, no power steering,” says Aliyyah.

“It has really helped improve my driving as well, because they are pretty physically demanding, especially on the arms. It’s fun but also crazy, sometimes I wondered if it was more off-road than rallying, because there were so many safety cars, and I would qualify 27th or something and be up to ninth by the second corner.

“But I think I have been able to use some of the experiences from NASCAR to improve my overall driving which I can then use on the Dakar because you need to be prepared for everything.”

Contesting a three-pronged season in 2022, Aliyyah’s best Dakar preparation has undoubtedly come in the FIA Middle East Cup for Cross-Country Bajas. A four-round campaign, Aliyyah not only won the T3 class title, but also picked up the overall crown following the final round of the year on home soil in Dubai, even beating four-time Dakar winner Nasser Al-Attiyah [albeit by dint of participating in every round].

“I was very happy to win the title, it is an amazing feeling to have won not only the T3 class but the overall as well,” Aliyyah adds. “It wasn’t an easy rally as on the first day we had a crash, which caused a lot of damage, so it was a really difficult start.

“Considering I have tested in Dubai a lot in the last couple of months, it was a lot harder than expected.

“Then, after the race, it was so stressful because people in front got penalties, so we got really lucky that the guys in front of us – who were just behind us in the points – got a penalty and we won.

“I was looking at the trophy and there’s this big ‘FIA’ on the trophy and I thought ‘oh my goodness’ this is a big title and I’m still just 18 years old, it was and still is a bit crazy to think that I am an FIA champion.”

That Aliyyah was even still in contention to secure the title on the second day of Dubai was a minor miracle in itself. The crash was a heavy one, coming after a small misjudgment over a dune which pitched her Can-Am SSV into a roll.

Significant front-end damage hamstrung the car for a lengthy period and, despite benefiting from spare parts courtesy of team-mate (and fellow former French truck racing star) Téo Calvet, failed to reach the finish of the stage.

“It was a long day,” says Aliyyah. “The first part of the stage went really well but we got stuck a little bit before the refueling, so we lost around six minutes. Then we were waiting a long time in the refueling because there were a lot of other cars.

“But the second part went really well, until there was a danger that wasn’t written in the road book, and I was going fast and didn’t see it in time, so the car jumped, and I hit a big rock which damaged the car a lot.”

Thankfully, the hard work had been done early in the season, starting with overall victory in the Jordan Baja, with Yasmeen finishing third in the T3 class.

Round two in Qatar didn’t go according to plan for Aliyyah but Yasmeen ended up just off the class podium in fourth, her last event before her season-ending wrist injury. A second win for Aliyyah on the Ha’il Baja put her within reach of the title and, after the aforementioned penalty in Dubai, came out on top in the points race.

While Aliyyah has been busy winning titles and preparing for her maiden Dakar Rally participation in the best possible way, things have been far from ideal for Yasmeen, who teams up with experienced biker turned navigator Taye Perry for the Saudi Arabia event.

“Since this is my first Dakar, my goal is to learn as much as I can, and finish,” says Yasmeen. “Obviously with my injury, I haven’t raced so much this year, I did Jordan and Qatar but have missed the rest of the season.

“But I have been testing in Dubai and practicing with my new navigator, so I have an idea of what the car is like and how the Dakar will be.

“It’s nice to have a navigator who is experienced and who knows what they are doing; it’s also nice to have another girl beside me too and so far, working with her has been a nice experience. We haven’t raced together but we have driven together in the desert, so we know sort of what to expect. We are well synchronized and have good communication between us which is very important for the Dakar so I am confident we can have a good Dakar.”

Communication between driver and navigator really is a critical element of doing well regardless of the rallying discipline. For the 2023 edition, Aliyyah will again be partnered by her regular passenger, Frenchman Stéphane Duplé. It’s a combination that has yielded a pair of titles, so there’s certainly no need to change a winning formula, particularly as both sisters will benefit from the mentorship of past Dakar Rally winner in the T3 Lightweight Prototype class, Josef Macháček.

But what about the prospect of Yasmeen and Aliyyah joining forces together, as twins? It’s a cliché question that DirtFish felt obliged and equally reluctant to ask…

“No way,” says Aliyyah. “I have an absolutely terrible sense of direction so would not be a very good navigator. We’ve always been very competitive but very supportive of each other at the same time, but if we were to be in the same car on a rally, I think we might just end up arguing a lot!”

Funnily enough, Yasmeen has a similar assessment: “I prefer driving to be honest. During testing, we did some driving sitting next to each other where I was driving and she was next to me and the other way around, and when I am driving, I have a better sense of direction than Aliyyah when she’s in the passenger seat!”

Maybe the myth about twins being telepathic remains just that.

Either way, one thing that is guaranteed is that the Kolocs’ maiden Dakar experience will be one to remember for years to come. 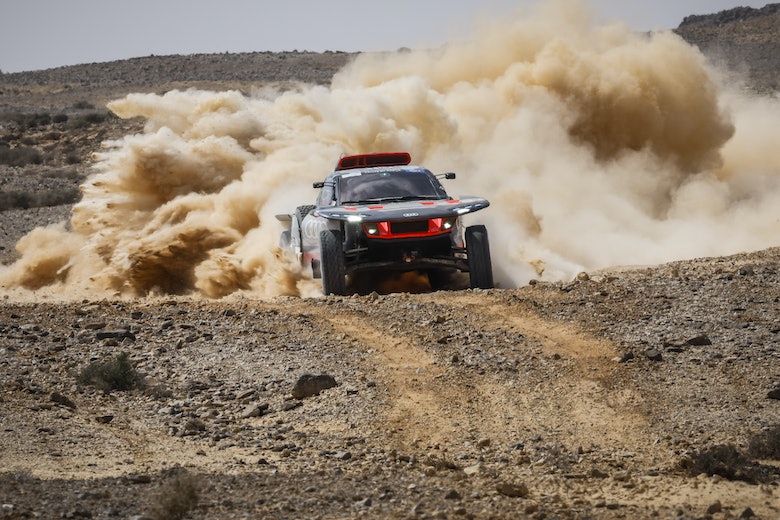 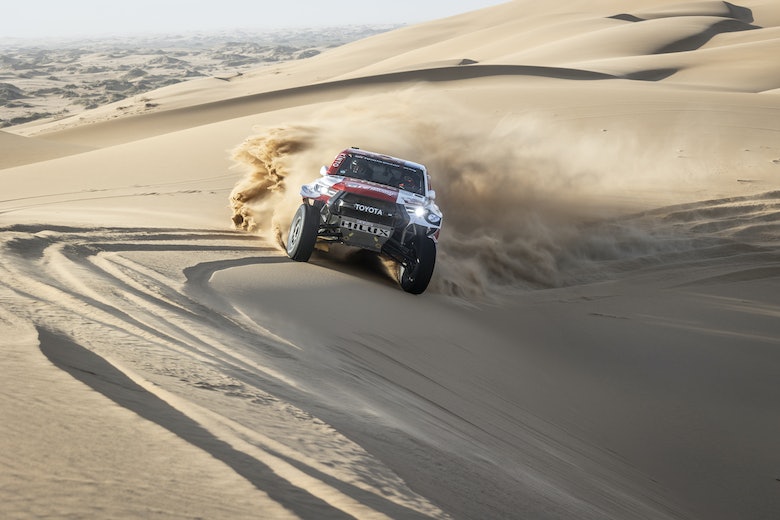 Toyota Dakar boss Hall: We have to trust FIA on engine rule changes 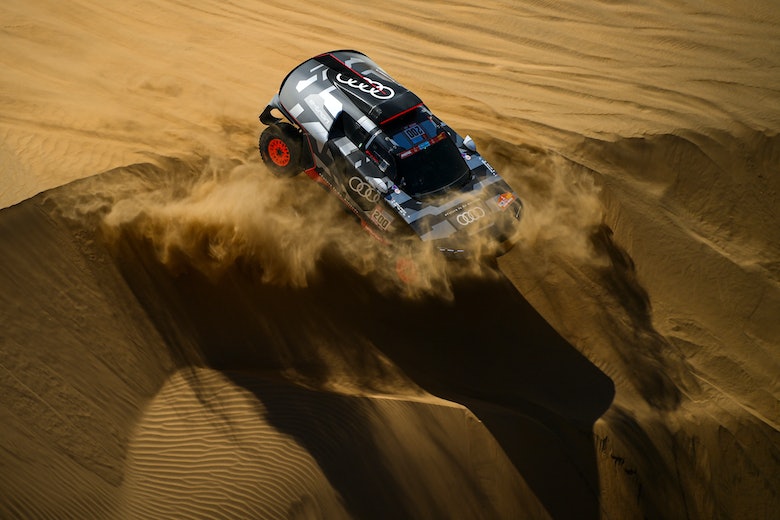