XE’s first five-car final started with a three-wide battle for the lead running almost all the way until the first tight corner of the track.

Initially Rosberg X Racing and X44 banged doors over first place into gate one, but the use of the ‘hyperdrive’ boost that doubled the power output from 200kW to 400kW enabled Munnings to pass both.

Through gates three and four they were all running side-by-side, with X44 driver Sébastien Loeb the one sandwiched in the middle.

JBXE’s Kevin Hansen couldn’t make it four-wide before the gate six hairpin that goes onto the cliffedge part of the lap, but his use of ‘hyperboost’ brought him right into the battle and he could have gone past all three ahead had RXR’s Molly Taylor not slowed significantly at the apex and left Hansen having to brake hard.

There wasn’t a second chance to make a move through the single-lane section that followed, as Loeb pulled away by eight seconds. Once the cars returned to the riverbed of the Russell Glacier he was bringing his lead up to 15s, but his continued push backfired as he picked up a rear-right puncture in the ‘rock garden’ section at the end which had to be changed in the driver switch zone as he handed the car over to Cristina Gutiérrez.

Taylor just held off Munnings as they finished their laps in the car, with Hansen not too far behind and the Acciona Sainz car of Laia Sanz some way back. 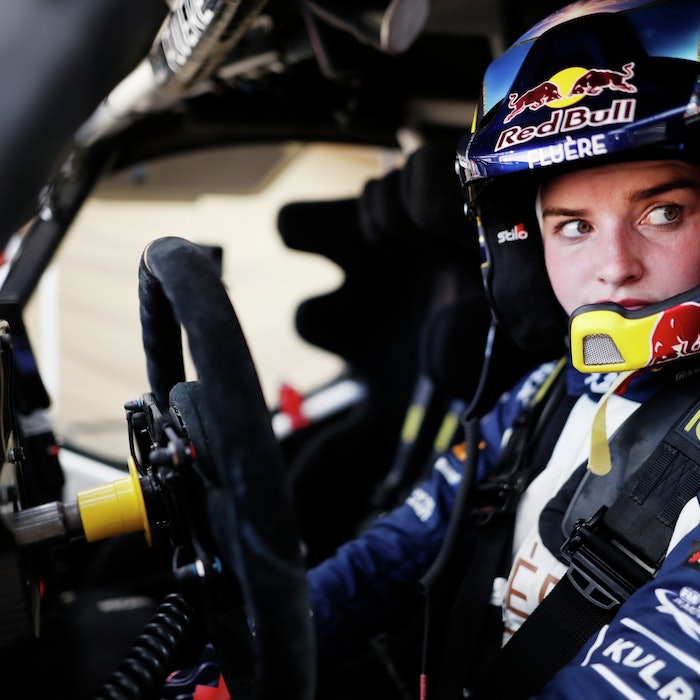 The pace has been incredible, the team has done such a good job. We’ve worked so hard on this. Catie Munnings

The tire change left X44 and Acciona Sainz battling at the back on the second lap, while Timmy Hansen left the switch zone in first place for Andretti ahead of RXR’s Johan Kristoffersson and JBXE’s Mikaela Åhlin-Kottulinsky.

The top two couldn’t be split, with the usual World Rallycross rivals running side-by-side where it was possible to until the jumps on the riverbed. After attempting possibly the biggest jump of the weekend to pass Hansen, Kristoffersson landed hard and the car stopped which left the path free for Hansen to win.

“I just can’t believe it,” said Munnings after Andretti’s win. “The pace has been incredible, the team has done such a good job. We’ve worked so hard on this.”

Hansen said “we both went way above the limit” in reference to his battle with Kristoffersson, and praised his team-mate too.

“What a drive Catie did to get us in the lead before the pitstop,” he said.

Kristoffersson’s issues promoted JBXE to second place, having only made the final via an unlikely victory in the crazy race where the team served a 30s penalty and still won.

“It was an incredible drive,” said Kevin Hansen, while Åhlin-Kottulinsky added: “We are a great team, we so deserved this. You’re the best team-mate.”

Carlos Sainz took the final podium spot for his own team by just 0.048s on the road ahead of Gutiérrez who, at the final corner, took an outrageous line that took her from several car lengths behind to just alongside but at the cost of missing the final gate. The result was she was penalized five seconds after seeing the chequered flag.

The podium finish was especially important for Sanz; a recent convert to car racing from bikes who actually only completed her first ever racing start in the Arctic X-Prix final.

“It was not easy today for me to manage the first time I start with five cars,” she said, before celebrating with her team-mate and team boss Sainz.

RXR managed to finish the second lap, albeit a minute behind Andretti, and has kept a healthy points lead in the championship. Andretti has moved closer to the title battle as the team also picked up the additional five points for being fastest in the ‘super sector’.